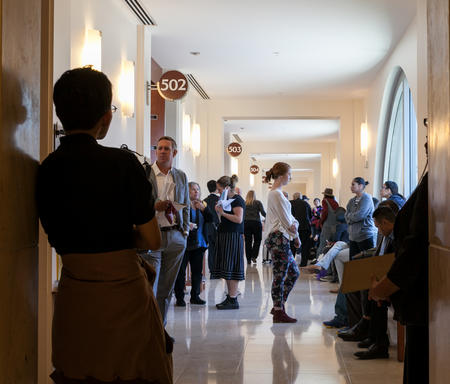 When San Franciscans find themselves in conflict with a landlord, renter, roommate or neighbor, they’ve always had an option to avoid legal combat: mediation. At its best, the let’s-work-this-out approach can turn an ugly disagreement into a coming-together of sorts.

So far, however, mediation has been used mainly to settle disputes short of tenant-landlord Armageddon — eviction. Amid the city’s growing housing crisis, some now see mediation as an alternative to nasty, expensive court fights to keep tenants housed and property owners content. For more than 20 years, that approach has staved off evictions in the capital of Wisconsin.

“The strength about mediation is because it’s a process where people talk and listen,” said Jim Garrison, who for 30 years has worked at Community Boards, a nonprofit conflict-resolution center in San Francisco.

The San Francisco Rent Board offers mediation as an alternative to binding arbitration. Sessions are facilitated by one of the Rent Board’s 10 administrative law judges.

“It is a very important tool in the toolbox,” said the agency’s Joey Koomas, who emphasized that the collaborative process allows for creative, home-brewed resolutions, without just one winner and one loser.

But Koomas said mediation is generally used for situations where the landlord hasn’t made necessary repairs or tenants are arguing over parking, not for a pending eviction.

With its mediation program, the San Francisco Bar Association focuses on subsidized and supportive housing, though it is often used for smaller disputes. Attorney Carolyn Gold said it is “intended to reduce the need for eviction,” but isn’t designed to deal with legal issues.

A Focus on Relationships

The Community Boards’ approach focuses on relationships.“Not only do you want to get something taken care of, but you want to strengthen the relationship between the people having the dispute,” Garrison told the Public Press. “So in the future they’re perhaps more comfortable talking about a problem, versus holding it back or being passive-aggressive or acting out.”

A three-person volunteer panel conducts Community Boards’ mediations. Members are chosen with an eye toward economic, ethnic and gender identity; ideally each aggrieved party will have someone on the panel they can relate to.

Amy Farah Weiss, a housing activist and founder of the Saint Francis Homelessness Challenge who ran for mayor this year, has spoken about mediation as one of many pieces of a potentially more humane housing policy.

She said she was exposed to mediation practices working at the San Francisco Community Land Trust. She saw clearly that it wasn’t just tenants who lacked options. Landlords with irresponsible renters also needed alternatives to collect unpaid rent and protect their rights and their properties.

While Community Boards charges a sliding scale fee ranging from $40 to $100, the San Francisco Rent Board’s services are free. And there are several other small programs, run by local nonprofits. All are a bargain compared with the time and expense of a lawsuit.

So why isn’t mediation at the top of everyone’s list of solutions?

For starters, there are limitations. At the Rent Board, the waiting list is six to eight weeks. Koomas said with more resources his agency could increase outreach to let the public know about the program and take on a wider variety of cases.

Weiss supports the expansion of such programs. “So many issues can be headed off at the pass if there were truly enough accessible and affordable services for property owners and tenants to work through some of these issues,” she said.

Community Boards, funded through the California Department of Consumer Affairs, receives 1,200 to 1,400 mediation requests every year but handles only around 100, Garrison said.

And while about 85 percent of the sessions end with a shared resolution, “it’s not a panacea,” he added. “We can’t use terms like ‘magic bullet.’”

One major catch, of course, is that mediation is voluntary. The raging housing market has made property owners seemingly more likely to pursue eviction rather than resolve issues with their tenants, Garrison noted. “If someone’s invested in property, they have much more at stake now than they would have had even 10 years ago,” he said.

To Weiss, her mayoral campaign confirmed that the public is hungry for solutions to the city’s housing crisis. “It’s really important that we make sure we’re doing everything possible to create those pathways for people to successfully stay in their housing,” she said.

How It Works in Madison

Not using mediation for evictions could be a missed opportunity.

Every Tuesday, when tenants or landlords in Madison, Wisconsin, arrive at the Dane County Courthouse for eviction hearings, they’re greeted by volunteers ready with information on their options: trial, legal assistance or mediation.

Since 1996, the Tenant Resource Center has used volunteer mediators to settle landlord-tenant disputes, many of which have helped stave off evictions.

Executive director Brenda Konkel said that more than 90 percent of cases are about nonpayment of rent, and that most agreements end up with payment plans allowing the tenant to stay.

“Unless the landlord is mad at you about something else, if it’s just a matter of payments, a lot of times it’s in the landlord’s financial interest to mediate this and have that person stay there,” Konkel said. “The landlord is pretty motivated to try to work this out so they don’t have to do all the work that they have to do to turn over the apartment, and the tenants get more time to kind of figure out how to make those payments.”

Konkel said the mediation program has “changed the culture” of the eviction court experience. Landlords familiar with the resource center show up “kind of expecting to come up with some sort of agreement if they can.”

In some cases, the tenant agrees to a move-out date, but it’s one “that they know they can make plans for.”

She said her organization mediates about 300 of the 2,000 annual eviction cases in Dane County. It uses two metrics to measure success: 90 percent of those who enter mediation don’t end up in homeless shelters, and 70 percent still have not been evicted within three months after mediation.

Like San Francisco, Dane County is facing a housing crunch. So, could the existing mediation programs here also play a bigger role in keeping people in their homes?

“It will prevent lawsuits later down the line and it truly gets at the challenging work of supporting people living in community,” said Weiss. “We want to support the small property owners, because if they decide to sell their property, they usually sell it to the market in a way that’s going to … increase the rent greatly.

“Hopefully, having stronger mediation services can be a start to humanizing both sides,” Weiss added. “When we’re talking about small property owners and tenants, there’s so much hatred between the two groups right now.”