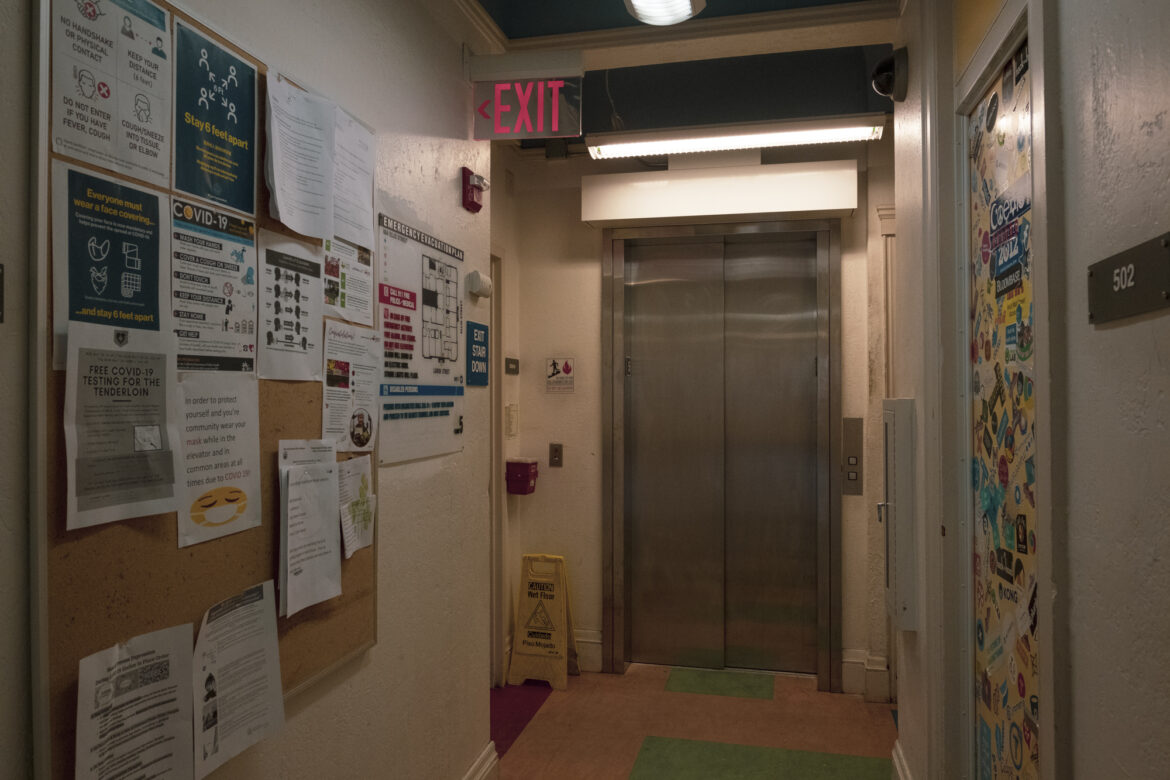 Single-room-occupancy hotels in the Tenderloin have vacant rooms meant to bring unsheltered people inside.

This article is adapted from an episode of our podcast “Civic.” Click the audio player below to hear the full story. In today’s episode, we discuss a joint Public Press–ProPublica investigation by reporter Nuala Bishari about vacancies in the city’s supportive housing portfolio — read the full story here.

It’s loud on 13th Street under the freeway, but despite the noise and the bright morning sun, people are sleeping in tents and on makeshift beds. Others are going about their day, sweeping or moving their possessions or heading to work or meetings. Alicia Hanson, ferrying some belongings on a bike, said she has done her utmost to get into housing, but has been repeatedly rebuffed.

“I just wanna be inside so bad,” Hanson said. “I will take wherever.”

Hanson said she does not understand why she has become bogged down in the process.

“I’ve been trying to, and ready, for like months. Like, maybe like five months,” she said. “I’m document-ready today. Why am I still in a tent and I’m document-ready? Like, I’m ready! I’m pushing.”

“I feel very, like, swept under the rug,” she said.

A recent investigation from the San Francisco Public Press and ProPublica indicates Hanson is not alone in her frustration. But the problem is not that there is nowhere for people to go. Rather, hundreds of units of permanent supportive housing — rooms in hotels or full apartments intended to get people experiencing homelessness a roof over their heads and connected with services — are sitting empty. Meanwhile, more than 1,600 people have been approved to move into them, and more than 400 people on the streets have been waiting to be housed for more than a year.

That finding is likely a surprise to most city residents, but the vacancy problem has been known to city officials.

“This is not a secret,” said reporter Nuala Bishari, who broke the story. “They have been reporting out these high vacancy numbers every single month in a PowerPoint to the Local Homeless Coordinating Board.”

The board is intended to play an advisory role to the city’s Department of Homelessness and Supportive Housing, but this agency and its half-billion-dollar budget have no official oversight body.

“One of the things that I keep being asked is, you know, what is the department going to have to do in order to fix this problem? And from my understanding, it’s just not being prioritized, this issue of high vacancies,” Bishari said.

While the department is making some changes, it has not been successful in filling all the move-in-ready units. Officials hired a team tasked with moving people from hotel rooms where they had been staying to protect themselves from the coronavirus.

“Despite having 18 dedicated staff members to this, in a good month, they only managed to move about 150 people indoors,” Bishari said. “Meanwhile, we have not had less than 800 vacant permanent supportive housing units in the past year.”

Her story examines several factors that likely contributed to the persistent vacancies, including errors in the city’s software for tracking people who need housing. If a candidate for housing is out of touch with a case manager for 90 days, their spot on the waitlist expires, and the system may kick them back to the end of the line by incorrectly indicating they have been waiting for days or weeks, not months.

This problem has drawn attention from software engineers.

“Since the article came out, I’ve had so many Twitter messages and emails and comments from people who work in tech in the Bay Area who are like, ‘How do we fix this?’” Bishari said. “They keep telling me, you know, the first step when you’re designing a product is to make sure that it is meeting the needs of the population that it is being created to serve. And from all of the people I’ve talked to who work at these nonprofits, who are case managers, who are frontline workers, who were interfacing with the software system every day, they are saying this is not meeting the needs that we need it to.”

Other readers have responded with frustration that so much of the work falls to nonprofits, and suggested that these organizations depend on the problem’s continued existence for their own funding, so intentionally fail to address it.

“I think it’s easy to want to find a villain here,” Bishari said. “And I’m reluctant to apply that label to anyone, because I think everyone in this process whether it’s the city, or the nonprofits, or the caseworkers all want the same thing, right? We all want to get people off the streets and into housing. There’s a lot of bureaucracy that is kind of overriding the decision-making ability of a lot of these nonprofits. But my experience is that the people who work at these nonprofits are deeply passionate about their work and really want to help people get indoors.”

Ultimately, she said, letting housing sit empty while people languish outdoors must be acknowledged as a dangerous situation.

“I think that in order for this issue to be addressed, we really need to view it as the absolute crisis that it is,” Bishari said. “The fact that that many people are going to be sleeping on our streets and in our shelters when they could be indoors is catastrophic. It’s devastating, and it should be fixed.”