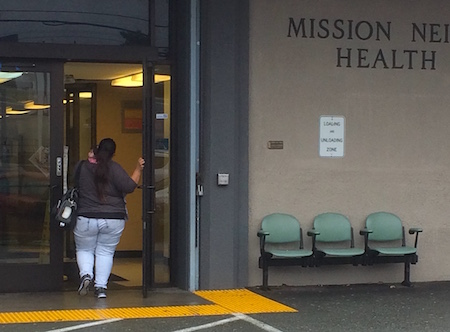 Because of uncertainty over funding, the Mission Neighborhood Health Clinic has imposed a hiring freeze and canceled plans to hire a health educator to work with children and adults who have asthma, diabetes and other chronic diseases. Photo by Michael Stoll // San Francisco Public Press

A health clinic in the Mission District has shelved plans to hire a health educator. An East Oakland clinic is delaying a remodel. And a San Francisco program that uses a van to provide medical outreach to homeless people on the street could be on the chopping block.

Across the country, 1,400 community clinics that care for some of the poorest people in the United States are anxiously making contingency plans to cope with potential funding cuts, all because Congress allowed a critical program to lapse.

The Community Health Centers Fund provided $3.6 billion to 1,400 clinics around the country for each of the past two years. It expired at the end of September and Congress, caught up in partisan warfare over health care and the Affordable Care Act, still has not acted to reauthorize the program.

If the funding is not restored, LifeLong would lose about $5 million in 2018, he said. A planned remodel of the Howard Daniel Clinic in East Oakland is already on hold.

“We’re out there trying to provide primary care, mental health and dental services to people who need them and we’re worried that health centers are going to get lost in the ideological attacks on health,” Lynch said.

Grants from the fund provide about $2.1 million of the $19 million annual budget of the Mission Neighborhood Health Center in San Francisco, said Chief Executive Officer Brenda Storey. To deal with the uncertainty, she has imposed a hiring freeze and canceled plans to hire a health educator to work with children and adults who have asthma, diabetes and other chronic diseases.

“I’m in a holding pattern. I don’t want to hire now if I’m going to have cuts soon,” Storey said. Like other clinic administrators, she is hoping Congress will act in the coming weeks to restore the funds, but is getting increasingly nervous. Loss of the funds would have a “devastating impact” on the clinic, she said.

The city’s municipal health access program for the uninsured, Healthy San Francisco, is not directly affected by the lapsed funding. But many San Franciscans enrolled in the program get their health care at the Mission center or three other nonprofit clinics that are supported by the federal fund. If services are reduced or doctors’ hours are cut at those clinics, people enrolled in Healthy San Francisco may have more trouble getting care, said Deena Lahn, vice president of policy and external affairs at the San Francisco Community Clinic Consortium.

Six million Californians — more than 1 in 7 — rely on the state’s 180 community health centers for medical services. California clinics stand to lose about $300 million if the funding is not restored, said Andie Martinez Patterson, director of government affairs for CaliforniaHealth+ Advocates, a statewide association of clinics.

The legislation that lapsed on Sept. 30 also funded other vital health programs. The biggest is the federal Children’s Health Insurance Program, commonly called CHIP, which provides insurance coverage to 9 million low-income children. Now, four weeks after funding expired, states are starting to feel the impact, according to the Center for Children and Families at Georgetown University’s Health Policy Institute.

In a new policy brief, the center reported that six states, including California, are expecting to run out of money by early next year and that six more may take action to reduce spending by the end of this year if Congress doesn’t act quickly to renew the program. Because of its size and impact, the threat to the child health program has received significant media coverage.

Almost no attention has been paid to another program that could be wiped out if funding isn’t restored. Last year, the National Health Care for the Homeless program provided $348 million to 295 local efforts that provide health care services to homeless people.

“A tremendous number of programs are left hanging and it’s not clear what will happen” to any of them, said Wayne Yost, acting chief executive officer of Ravenswood Family Health Center in East Palo Alto. “It’s very frustrating.”

Earlier this month, the staff of the Ravenswood clinic in East Palo Alto was so concerned about a report in the Palo Alto Weekly on the impact of the potential funding cuts that Yost convened a meeting to reassure his staff. For now, he said, no cuts are needed and no plans are being shelved.

In early October, on a party-line vote, the House Energy and Commerce Committee advanced a Republican proposal to continue the health center funding. It would cut $6.35 billion from the Prevention and Public Health Fund, a pot of money set aside by the Affordable Care Act to pay for disease prevention and public health measures. A package extending health center funding and the child health program, along with the cuts to the prevention fund, may come to the House floor this week.

Rep. Greg Walden, the Oregon Republican who chairs the committee, was traveling and unable to comment on the impact of the trade-offs that are part of the proposed legislation. A member of his staff, who declined to be named, said that because the prevention fund was intended to pay for public health programs, it makes sense to take money from it to support clinics that serve low-income populations.

Democrats and public health advocates oppose using the prevention fund to pay for existing programs because that would slash overall support to programs that care for low-income, vulnerable populations.

“The bill has become a vehicle for the Republican majority to sabotage the Affordable Care Act,” said a spokesperson for the committee’s Democrats who asked not be identified.

The American Public Health Association said in a statement Monday that it strongly supports reauthorizing the expired programs, but “we do not support doing so at the expense of the prevention fund and the important public health programs that already depend on this funding, including programs to increase immunizations, prevent lead poisoning and prevent the spread of infectious diseases like the Zika and Ebola viruses.”

Clinics in rural Northern California, where there are few medical providers, are especially reliant on federal grants, said Martinez Patterson of CaliforniaHealth+ Advocates. The funding that’s threatened was expected to start as early as January 2018, leaving clinics little time to plan and adapt, she said.

“I’m most afraid for these rural programs, especially during an opioid crisis,” Martinez Patterson said. “If they shut down a behavioral health program, it’s really hard to get them to reopen.”

If the funding impasse drags on for months, the impact on health centers could mount. The Ravenswood clinic was recently awarded a large grant that would help it add nine additional dental chairs to fill a desperate need in the community for more dentists.

But if core clinic funding dries up, the clinic would be hard-pressed to spend money on new services while curtailing existing services, Yost said. And time is tight: If he accepts the dental funding, the work would need to be completed by early 2019.

“Dental services have been incredibly needed in this community,” he said. “But we can’t wait for a few months to see what happens.”