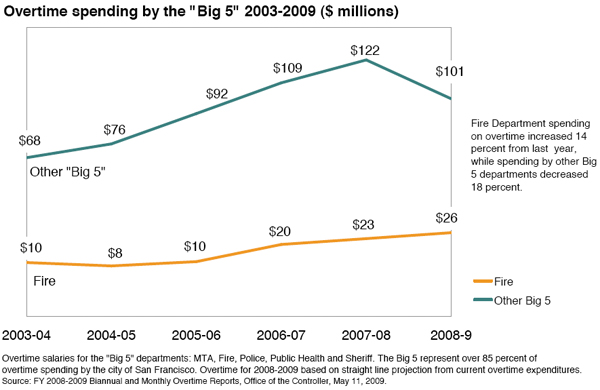 The San Francisco Fire Department is the only major city division whose overtime pay has grown in the last year -– straining the budget in a season when nearly every department has had to make painful sacrifices to help bridge a $438 million deficit.

And as politicians tussled last month with firefighters and police over more than $80 million in proposed cuts, neither side in the debate focused on what all acknowledge as a worrisome development: the expensive and unrestrained growth of firefighters’ extra pay for working longer hours.

The unparalleled growth can be traced to a series of events. First, overtime spending spiked after voters passed a 2004 proposition requiring 24-hour staffing. Spending continued to climb in 2007, after Mayor Gavin Newsom and the fire union negotiated a large election-year pay increase for fire employees, while instituting a hiring freeze and mandatory overtime. The department said that was the right decision because paying overtime is cheaper than hiring new full-time employees with benefits.

The city’s four other large departments — police, sheriff, transportation and public health — all managed to decrease overtime by an average of 21 percent in the last year. And they are slated for 39 percent in further cuts in the next year.

The discrepancy has been growing for half a decade. Overtime for firefighters has risen 169 percent in just the last five years. Most of that came in 2005 –- the year after voters endorsed a measure that required all 42 firehouses to stay open day and night. That year, overtime shot up 90 percent. Healthy raises through union contract two years later made firefighters’ base pay climb even higher, a recipe for skyrocketing budgets.

Some prominent critics say the Fire Department’s outsized overtime pay is a perennial budget ploy by a politically connected city agency — and its union — to beef up workers’ already high salaries.

But Newsom has clearly thrown his support to the firefighters in this year’s budget fight, appearing at a carefully staged union rally last month to oppose the effort by the Board of Supervisors to scale back public safety spending. In late June, the supervisors succeeded at cutting $16 million — or 19 percent of the trim they had envisioned the previous week.

The growth of overtime pay has many causes. One is a hiring freeze dating back two years, leaving more work for fewer firefighters.

The department’s annual report last year noted that the number of fire calls tripled in the last decade, while the number of on-duty firefighters decreased by seven through attrition and retirements.

"With each wave of retirements you are getting shorter and shorter in your on-duty personnel," O’Connor said.

The department is understaffed by 168 firefighters, O’Connor said, leaving overworked staff susceptible to injury. He said that has made the city less safe and forces firefighters to work extra hours on weekends and holidays.

"We get nothing but phone calls on Christmas Eve with people saying, ‘I’m being forced to work,’" O’Connor said.

The administration denied assertions that the department is understaffed. In an e-mail, Joe Arellano, communications director for the mayor’s office of communications, wrote, "That’s simply untrue."

Noting that in 2004’s Proposition F, voters mandated keeping all of San Francisco’s 42 firehouses open, Arellano wrote: "It has been the practice of the SFFD to staff fire stations with a prudent use of overtime as a way to meet the Prop F requirements in the most efficient, cost-effective manner that ensures fire personnel safety. The Mayor’s Office supports Fire Chief Joanne Hayes-White in her efforts to strike this balance."

The policy of mandatory overtime — something the city had not practiced for 20 years — has angered the fire union. The local’s president, John Hanley, sent two scathing letters to Hayes-White in April requesting more firefighters.

Talmadge said the city will soon start hiring new firefighters, who could join the department as early as the beginning of 2010.

Another cause for growing overtime spending is the rapid inflation of firefighters’ base pay, making overtime much more expensive. A 2007 labor contract gave the firefighters’ union a 23 percent salary increase over four years.

After the contract was negotiated, Hayes-White decided it would be more cost effective to require mandatory overtime for existing firefighters than to hire additional workers, said Talmadge. Hayes-White was traveling in early July and was not available for comment on the overtime issue.

"It is cheaper because when you hire someone overtime, you aren’t paying someone all the added benefits," Talmadge said. "You pay time and a half, but it is still a lot cheaper than paying all the health care."

But some politicians question the wisdom of delaying needed hires. Critics also say rising overtime represents inefficiency and that the department’s employees are generally overpaid.

The department has 64 employees who earn more than $150,000 a year. This year, the most highly paid officers — including the fire chief and battalion chiefs — all offered to forego their raises as part of a Fire Department budgetary give-back.

Yet those sacrifices are minimal compared with the size of the total department budget. The Fire Department’s take, a proposed $279 million for next year, has increased 37 percent since 1998 — with more than half of that money going to increased wages and employee benefits.

In a report this March, the City Controller’s office found that SFFD spends $128 per capita more on fire suppression than similar California cities, such as Los Angeles and Sacramento.

According to the International Association of Fire Fighters, San Francisco’s firefighters work, on average, 5.3 hours longer per week than their counterparts in New York, Boston, Philadelphia, Miami and Chicago.

But the controller’s office report said they work four hours less than firefighters in other major cities in California.

But the union said the study was skewed, and that San Francisco could not be compared with other cities in California because of its abundant wood structures, high population density and the medical service the department provides.

Another factor in the cost: San Francisco also has four times the average number of stations than other California cities have — in part because of its vulnerability to earthquakes.

One major change from the last decade, which is still adding expense, was the reassignment of paramedic services to the Fire Department.

"We absorbed the paramedic division from the Department of Public Health in 1997, so we have increased our work load by putting paramedics in every fire engine … and ambulances," O’Connor said. "That has doubled our call volume just in the last 10 years alone."

Critics, like Jennifer Friedenbach, executive director of the Coalition on Homelessness, argue that the Fire Department’s continued growth is evidence of the powerful firefighters’ union’s ability to muscle beneficial contract deals.

In 2007, Supervisor John Avalos said, "the firefighters and the police officers were able to line up their contract with the mayor’s election. So during that election year, the mayor gave away the kitchen sink with wages and benefits, a 7 percent increase yearly that the board didn’t negotiate."

O’Connor disagreed with Avalos’ assessment, noting that the union has shown flexibility in subsequent years.

"We were the first ones last year to give back," O’Connor said. "We gave back 3 percent. This year we gave back 4 percent."

He said that comparisons with other cities only go so far because everything is more expensive here.

Updated 7/16/09: A contextual paragraph about causes of overtime pay increases.

Corrected 7/23/09: A previous version of this story misstated San Francisco’s comparative spending on fire suppression. It is $128 per capita.