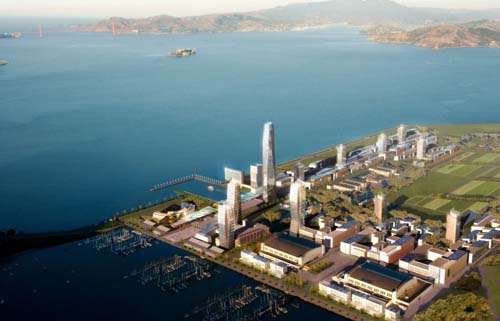 Treasure Island's proposed redevelopment would build up the southwest portion of the island to accommodate 20,000 residents. Photo courtesy of Skidmore, Owings & Merrill.

The public now has until Sept. 10 to submit written comments about the 2,000-plus-page report, first released in mid-July, which discusses environmental concerns ranging from transportation and greenhouse gas emissions to accommodating sea level rise and girding for earthquakes.
Critics attending the San Francisco Planning Commission and Treasure Island Development Authority special joint meeting on Aug. 12 questioned the proposed project’s density, transportation hurdles and adherence to environmental regulations.
“The scoping comments call for density, but this level of density? We don’t think so,” said Saul Bloom, executive director of Arc Ecology, a Bay Area environmental nonprofit in operation since 1983.
The 400-acre Treasure Island and its sister Yerba Buena Island, which sit in San Francisco Bay between the city and the East Bay, under current plans are slated to house up to 20,000 residents compared to the several thousand who live there now.
Developers and the city argue that such density is necessary to economically support a neighborhood that encourages residents to stay put. Eliminating the need for residents to leave the island by providing them with grocery stores, childcare, places of worship and other daily life essentials will reduce the traffic and pollution problems, they say.
But it appears to be a Catch-22 situation. If a robust neighborhood requires more residents, more people will ultimately use the Bay Bridge to access the islands. The only other way on or off the islands is a proposed ferry traveling to San Francisco.
Kate Kelley, director of the local Sierra Club chapter, said that the powerful environmental group supports redevelopment on Treasure Island, but seconded many of the doubts about the environmental impact report.
“We have serious concerns about the transportation plan, habitat conservation, about air quality issues and the impact on climate change as well as other issues,” Kelley said.

The birds and bees

Habitat conservation, particularly on Yerba Buena Island, which is not man-made and part of the Bay Area’s colorful settlement history, has played second fiddle to economic growth, said Mike Lynes, the conservation director and general counsel on environmental matters for the local chapter of the Audubon Society.
“I don’t want to see what’s happened at some of the other projects that have been before the city recently. Where the push for jobs, where the push for redevelopment, while justified, have outweighed environmental issues and the creation of an adequate EIR,” Lynes said.
In particular, Audubon is concerned about the population impact on the island’s birds and the harm caused to Yerba Buena Island’s native habitats, including coastal scrub, coastal riparian, tidal zones and off-shore eel grass. Yerba Buena is home to several species rarely found elsewhere in the Bay Area and a Habitat Management Plan for the island is underway.
The draft environmental impact review concludes minimal disruption to the habitats, but Lynes requested that they be examined more thoroughly to avoid a messy, slow approval process later. “I would ask you to take a hard look and not just be pushed by the politics and the money, but push through an EIR that is adequate at this point.”

Bringing in the lawyers

Among the most strident redevelopment critics at the meeting was Kenneth Masters, a 10-year resident of Yerba Buena Island and managing partner of White Oak, a San Francisco-based hedge fund.
Appearing poised for a fight, Masters logged his complaints with the commission, but also retained a lawyer, Nick Rossi, from the law office of Nick S. Rossi in Napa, to speak on his behalf. Masters began his comments by saying, “I hope you enjoyed Nick’s three minutes — it probably cost me about $2,000 for those three minutes.”
Masters’ primary concern is over the treatment of the Yerba Buena Island community, which the plan proposes to redistribute around Treasure Island in temporary housing units that are significantly smaller than some residences’ current domiciles.
“My opposition to this plan really starts with a contradiction in its mission, which includes ‘to create community and identity.’ When in actuality it’s going to destroy the community and identity in existence on Yerba Buena Island today,” Masters told to the commission.
Masters is part of the Yerba Buena Island mutual benefit corporation, a 501(c)4 nonprofit organization that was formally established a few months ago. The island’s 100 or so residents banded together because they said they felt abandoned by their city Supervisor, Chris Daly, and the Treasure Island and Yerba Buena Island Citizen Advisory Board. Of the advisory board’s 22 members only one is a Yerba Buena resident, and was added just six months ago, according to Masters.
“The Citizen Advisory Board, every time I mention concerns, they become indignant that I claim they haven’t done a good job,” Masters explained in a phone conversation. “They say, ‘We’ve been working on this for 11 years, and come up with the best we could.’ Well then, OK, if this is the best, you failed.”
Masters’ attorney, Rossi, took a different tack with the commission, admonishing the environmental impact report’s various omissions.
He stated that the EIR lacked a mechanism for maintaining the berm surrounding the island’s perimeter and that is essential to its safety. He also said comments by the California Coastal Commission, which must approve all rezoning plans, were absent.
Rossi’s full list of concerns will be submitted to the commission in writing.

Despite criticism from the public and Treasure Island Development Authority board members, the city said the meeting went as expected.
“There was nothing we haven’t heard at some time,” Michael Tymoff, the city’s redevelopment project manager, said about the hearing. “The comments received are easy to respond to and won’t require further analysis. It’s just a question of providing the information.”
Tymoff appeared to be the city’s main representative at the hearing. Jack Sylvan stepped down from his position as director of the redevelopment project last week, after internally announcing his departure more than six months ago, he said. While Sylvan has no immediate plans, he said he intends to travel.
Richard Hillis, from the Office of Economic and Workforce Development, replaced Sylvan as director at the beginning of August, according to Tymoff.