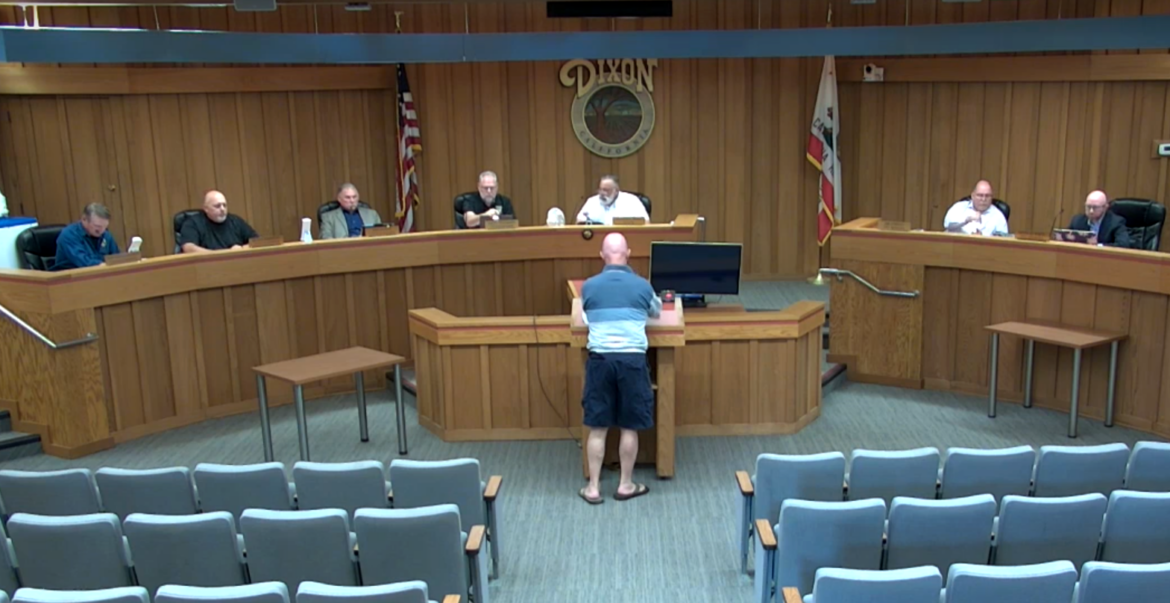 The Dixon City Council meets on Sept. 21. According to a Bay Area Equity Atlas report, people of color are underrepresented on councils and boards across the region, and some local governing bodies are all white, including Dixon's.

In the ethnically and racially diverse Bay Area, local politicians have long been disproportionately white. Research shows that while more people of color have been running for and winning seats, they make up only slightly more than a third of the region’s elected officials. Some city councils are entirely white.

The pattern has been evident, but not always well documented, said Kimi Lee, director of a coalition of regional activist groups known as Bay Rising.

“It’s one of those things where you kind of see it, and you’re like, ‘Hmm, there’s a lot of white people on that council,’” she said. “And then thinking about, well, has anyone checked? Like, is there actual data to support that kind of anecdotal thing that we see a lot of times?”

Absent a usable dataset, Bay Rising and the Bay Area Equity Atlas set out to make one. Since 2018, the Bay Area Equity Atlas has been tracking the region’s municipal officials, noting and verifying the racial identities of mayors, city council members, supervisors and district attorneys. In that time, the portion of top elected officials in the Bay Area who are people of color has gone from 26% to about 34%. Sixty percent of the region’s residents are people of color.

When previously underrepresented groups do win office, Lee said, “you see a difference in what is talked about in these meetings.”

She pointed to Oakland City Council President Nikki Fortunato Bas as an example, saying Bas has made a particular effort to involve community members in the process of governing through events like multi-lingual sessions in a public park to help determine budget priorities.

For Huang, seeing changes like that in action is powerful.

“I’m a first-generation immigrant from Taiwan, and I’ve been to one of these budget sessions with Nikki Bas. And seeing the translations hit hard,” Huang said. “To go to a city meeting where decisions are being made, seeing people who look like my grandparents, my parents, being involved, that was really beautiful to see.”

Huang and Lee identified a few possible ways to improve representation among local elected positions. For one thing, the cost of running for office can be prohibitive. Even local races attract big donations, Lee said, noting one Oakland school board race in an area serving 30,000 students that attracted hundreds of thousands of dollars in campaign donations.

Campaign finance reform to reduce the influence of corporate contributions or changing to a public campaign financing model may improve the diversity of candidates and level the playing field, the Equity Atlas report suggested.

The research also found that changing from citywide to district elections can increase the diversity of elected officials. The lower cost of running a campaign in a smaller area may be a factor, as well as the reduced effort required to canvas and connect with the residents of just one district.

“Then you also feel more in community. You have a district that you’re accountable to and that you can know the neighborhood better, versus a whole city,” Lee said.

District elections are well-established in some cities. San Francisco vacillated between district and at-large elections, adopting a district system in 1976 and then repealing it in 1980. Voters rejected an attempt to bring back the district system in 1987, but then embraced it again in 1996. Proponents of the district system argued it would create a more inclusive Board of Supervisors. The city’s first district elections in 1977 supported that theory. Winners that year included the board’s first Black woman supervisor, Ella Hill Hutch, the first Chinese-American supervisor, Gordon Lau, and the first openly gay supervisor, Harvey Milk.

The Bay Area Equity Atlas’ research suggests that the district system shows promise in bringing people of color into office. Huang said Redwood City elected its City Council members by district for the first time last year, and in each of the four districts where a seat was open, at least one person of color ran.

“And the most exciting thing is, the person color won that position in all four districts,” Huang said. “When you compare that to the previous election cycle, when all the candidates were white, that is a dramatic difference. It really shows that people are — especially people who have been historically excluded from running — are finding it more accessible to run for office.”