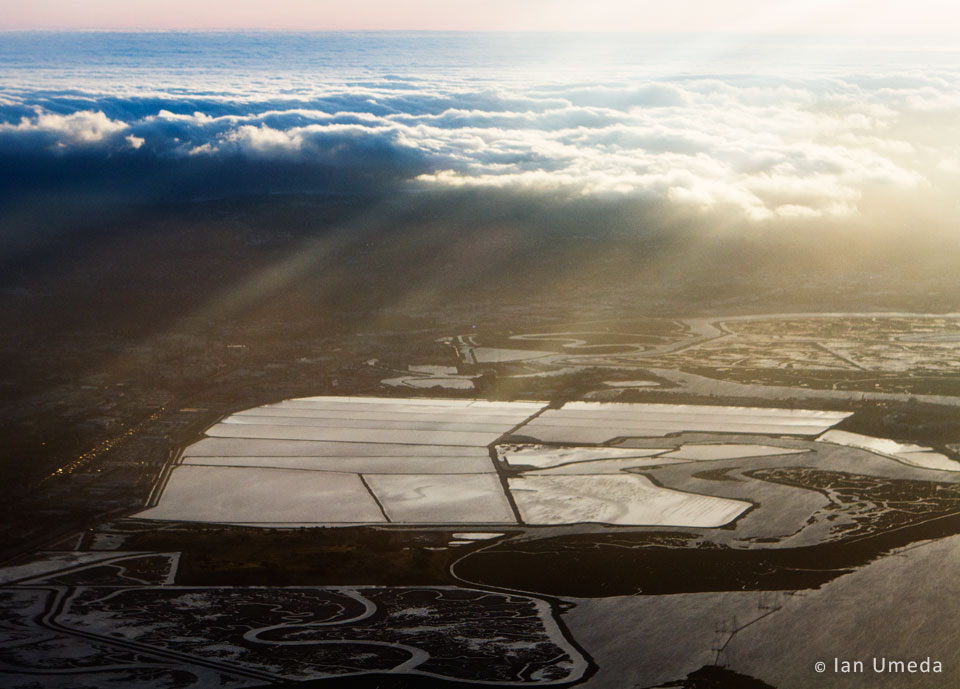 The Redwood City Saltworks project would develop 1,436 acres of old tidal salt flats on the edge of San Francisco Bay. Developers are pushing it as “transit-oriented” smart growth, but environmentalists oppose the plan in part because it will require levees to keep rising seas back. Photo by Ian Umeda/SF Public Press.

Maureen Nandini Mitra, Reporter |
LikeTweet EmailPrint More
Redwood City residents oppose a plan to build a massive development on a stretch of salt ponds beside the San Francisco Bay by a 2-1 ratio, according to new poll released Tuesday.
The poll found 57 percent of voters in the city were against Arizona developer DMB Associates’ proposal to build a mini-city by partially paving over 1,436 acres of low-lying salt ponds on the eastern edge of Redwood City. Only 28 percent of those polled supported the plan, while 15 percent were neutral.
“What the results show is that the Redwood City voters have already decided they don’t want the project,” said David Lewis, director of the environmental group that commissioned the poll, Save the Bay. “The more they learn about it, the less they like it,” he said. Lewis said that after hearing a short list of concerns about the project, opposition rose to 64 percent while support for the project remained stagnant at 28 percent.
Conducted by independent company J. Moore Methods and commissioned by Save the Bay, which is leading the charge against the proposed project, the poll is the latest salvo in what’s turning into a protracted and bitter battle between the Oakland-based conservation group and DMB, an Arizona-based developer. At stake are the 110-year old salt ponds owned by agribusiness giant Cargill. The two groups have been duking it out via local and national media and at public forums in the Bay Area for more than three years.
“The poll isn’t credible,” said David Smith, senior vice president at DMB Associates. “Save the Bay’s No. 1 objective is to shut down public consideration of the project.”
The expansive Redwood City Saltworks project, which DMB promotes as a “50/50 balanced plan,” envisions a mass-transit-oriented community about 12,000 low-rise energy efficient apartments, several schools and businesses, 368 acres of open space and 436 acres of restored wetlands. The whole thing would be built in phases over 30 years.
Apart from Save the Bay, the plan has drawn opposition from several other environmental groups, neighboring cities and elected officials who are concerned about its impact on the environment, as well as local traffic and water supply. The project area is susceptible to earthquakes and will have to be protected from flooding and rising sea levels by levees. Many, including activists at Save the Bay, prefer to have the salt flats restored as the wetlands the originally were. (The San Francisco Public Press carried an in-depth report on this development debate last year online and in its fall 2010 print edition.)
In 2008, Save the Bay and Friends of Redwood City placed a ballot measure that would require a two-thirds majority vote to allow developers to build on open spaces. But voters rejected Measure W.
Lewis is hoping the new poll results — which showed that 54 percent voters were likely to support a candidate who opposed the project — would prompt city officials to abandon the idea of the project since it wasn’t politically expedient.
But city officials held their ground today, refusing to take a position on the matter until a full environmental impact assessment was done.
“While the survey information is interesting it can’t be the sole source for the council’s decision-making process,” said Redwood City spokesman Malcolm Smith. “A transparent environmental impact review is important for any project, but especially this one.”
Redwood City recently ended a five-month comment period on the scope of an environmental impact review of the DMB proposal that drew nearly 900 pages of comments. A large majority of commenters, including residents, environmental groups, neighboring municipalities and state and federal agencies, voiced concerns about infrastructure and the environment.
DMB Associates is now refining its proposal, which will again be placed before the city and made public for a second round of comments.