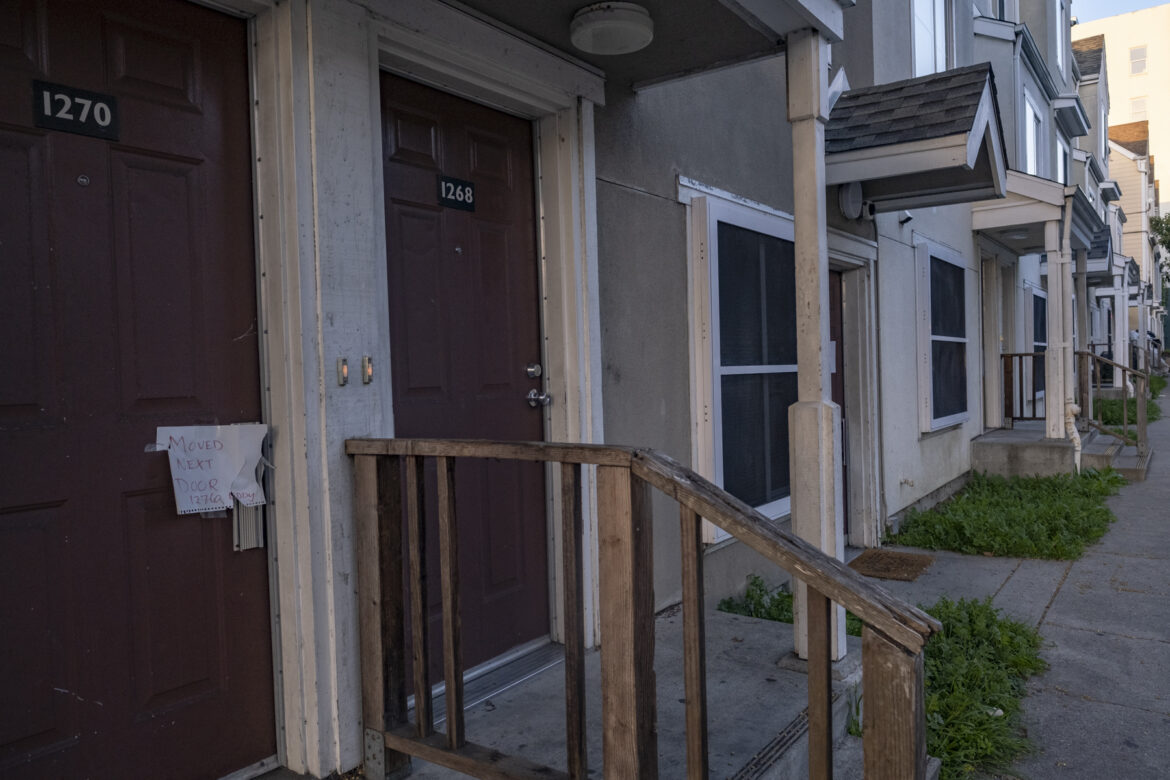 Tenants of the Plaza East public housing complex in the Western Addition complain of leaky pipes, pests and mold. Public officials questioned the owner and developer at a recent hearing about plans for the property.

The company that owns and manages the Plaza East public housing complex in San Francisco’s Western Addition neighborhood says it does not currently have a plan to tear down the property.

The shift in the firm’s message comes after the U.S. Department of Housing and Urban Development did not approve a $320 million request from the company and the San Francisco Housing Authority, which owns the land, to demolish and rebuild the existing public housing complex and potentially add hundreds of units.

The St. Louis-based company, McCormack Baron Salazar, clarified that it has no current plans to demolish Plaza East at a public meeting last week — marking a departure from a proposal submitted to HUD earlier this year.

Supervisor Dean Preston, who represents the Western Addition, called the hearing of the Board of Supervisors’ Government Audit and Oversight Committee to question company staff on their goals for the project, whose residents are entirely low-income. The majority of them are Black. “In my experience talking with the developer, and with different departments, it’s been very hard to pin down what the plans are,” Preston said.

“Is there a current plan that involves demolishing some or all of Plaza East?” Preston asked in the hearing.

“We are going to engage with the residents on what the reimagining process looks like for Plaza East,” he said. “Our first meeting is later this month.” Those conversations, he said, would influence the decision about whether to demolish the complex.

In the application the company and Housing Authority sent to HUD earlier this year, they had emphasized that full demolition was the goal, requesting approval to demolish and rebuild all 193 units, as well as add roughly 250 to 350 units.

Vincent Bennett, president of McCormack Baron Salazar, described the financial challenges the company faces with Plaza East, in particular the dwindling federal subsidies for public housing, in a November letter to HUD staff.

“There is a solution,” Bennett wrote. “By approving this application to replace all the existing public housing and add additional units at all incomes, HUD can help the residents and City create a new mixed-income community that redesigns a nurturing, walkable Plaza East where residents feel safe to be outdoors and in community.”

At last week’s meeting, Preston asked the company and the Housing Authority to map out a plan for engaging the community in the decision-making process over Plaza East’s future.

If they failed to give his office a written plan, it “would be totally unacceptable,” he said.

Preston said that only persistent political pressure will keep the dialogue open between the developer and the tenants of Plaza East.

“There’s not a structural requirement that says, you cannot submit your application for funding without this percent of tenants buying in,” Preston said, referring to applications for federal approval to do major work at public housing.

The developer drew attention in March over its application to HUD. The proposal discussed adding hundreds of market-rate and affordable apartments, which would generate more revenue.

McCormack Baron Salazar saw razing the 20-year-old complex as a way to address both a long backlog of repairs and the financial troubles at Plaza East. The property has been operating in the negative for years, according to the company, and many tenants live with leaking pipes, pests and mold.

“It’s inconceivable to me,” Preston said, referring to the living conditions.

“Neither our current mayor, nor previous mayor, nor the District 5 supervisor, nor the Housing Authority Commission — nobody has moved that conversation forward,” he said. “They’ve just let the Plaza East conditions get worse.” Preston and his staff have met with the developer, city officials and tenants several times over the past year in an attempt to address these problems.

Mayor London Breed, who grew up in Plaza East before it was torn down and rebuilt two decades ago, was District 5 supervisor for about five years before stepping into former mayor Ed Lee’s position upon his death in 2017. She later won the mayor’s seat in a special election. She was succeeded by Vallie Brown, whom Preston defeated for the district seat in 2019.

Now Plaza East tenants “have to really focus on political organizing,” Preston said, adding that exerting their power “includes demanding to be at the table and sign off on the plans.”

Sulaiman Hyatt, a community organizer for public housing tenants, said the first step toward a healthy dialogue between McCormack Baron Salazar and the tenants would be to establish an air of respect and trust — and characterized the public meeting as a missed opportunity.

Hyatt called the meeting “sanitized” because it failed to hold the company accountable or validate tenant frustrations over what tenants describe as substandard living conditions that have persisted for years. None of the scheduled speakers were tenants of the complex.

“They don’t have to deal with the sewage coming out of the walls or the rats in the walls. They can speak about it in the abstract,” he said.

During the meeting, some tenants called in for public comment.

Comelia, who did not give her last name, reported severe water damage in her unit.

“My back wall is basically coming apart, like tissue, and they cleaned it up and put a board over it,” she said. “So there’s more that needs to be done with the structure of the site.” She said the developer should hire maintenance staff “that actually know how to fix things — not just people that you guys are basically wasting money on to be on site, that can’t even change a hose on a washing machine.”

The Mayor’s Office has approved a $2.7 million loan to McCormack Baron Salazar for emergency repairs. That work was scheduled to begin this week, Lydia Ely, deputy director of housing at the Mayor’s Office of Housing and Community Development, said at the meeting.

Another Plaza East resident, named Assi, said she had “emotional traumas that have been part of living here” due to a “lack of security, a lack of concern for our well-being.”

She said she wanted to participate in the type of dialogue Nagraj had described.

“We also need the ability to have, again, transparency, so that we can help in the redevelopment of this property,” Assi said.