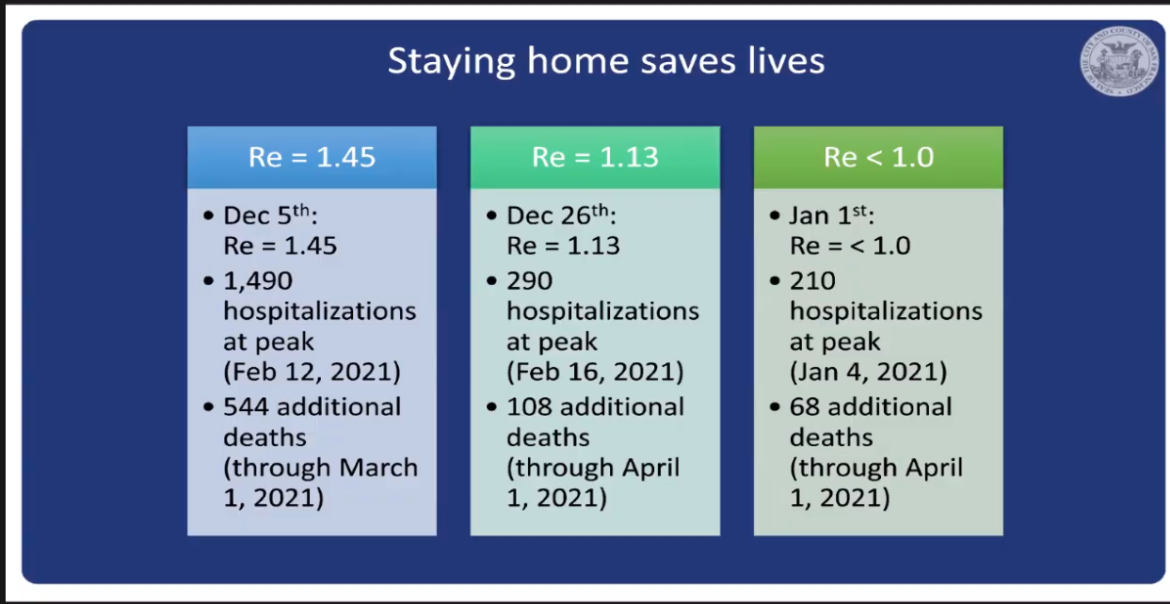 San Francisco remains in the most dangerous surge of the COVID-19 pandemic, but there are signs that people’s adherence to the recent stay-at-home orders are helping.

Dr. Grant Colfax, the director of the San Francisco Department of Public Health, said that a new trend means the city may yet avoid hundreds of additional deaths from COVID-19.

“The rate of increase is showing some signs of decline. We have managed to push the average number of new cases per day in San Francisco down to about 270 for the first time since Dec. 12.”

He said the previous rate of infections was projected to result in as many as 544 additional deaths in San Francisco by March 1. While the post Thanksgiving surge appears to be ebbing, he remains worried about the post holiday numbers and another, unexpected threat.

“We won’t have good insight into the impact of the Christmas holiday until Jan. 2 at the earliest and until Jan.ary 8 for the impact of New Years. And there’s also another new variable as you may have seen in the news. The United Kingdom has identified a variant strain of COVID-19.”

The variant is said to be more contagious than the better known strain of the novel Coronavirus, but there is no indication that it is more deadly or that it will not respond to the vaccines that have been developed. The Centers for Disease Control and Prevention announced today that the variant has been discovered in a man in Colorado who has not traveled outside the United States. The San Francisco Public Press asked Colfax if San Francisco or the state of California had the ability to detect the new variant.

“There are a number of labs, including at UCSF, that are sequencing — that means detecting the genetic patterns of the virus that are specific — that could identify this variant if and when it occurs. Overall, the United States does a very low number of sequencing of these viral strains compared to other countries. But UCSF and other labs across the state do sequence a proportion of samples of virus.”

It’s unclear how an outbreak of the new strain of the coronavirus could change the way California is handling the spread of the virus.