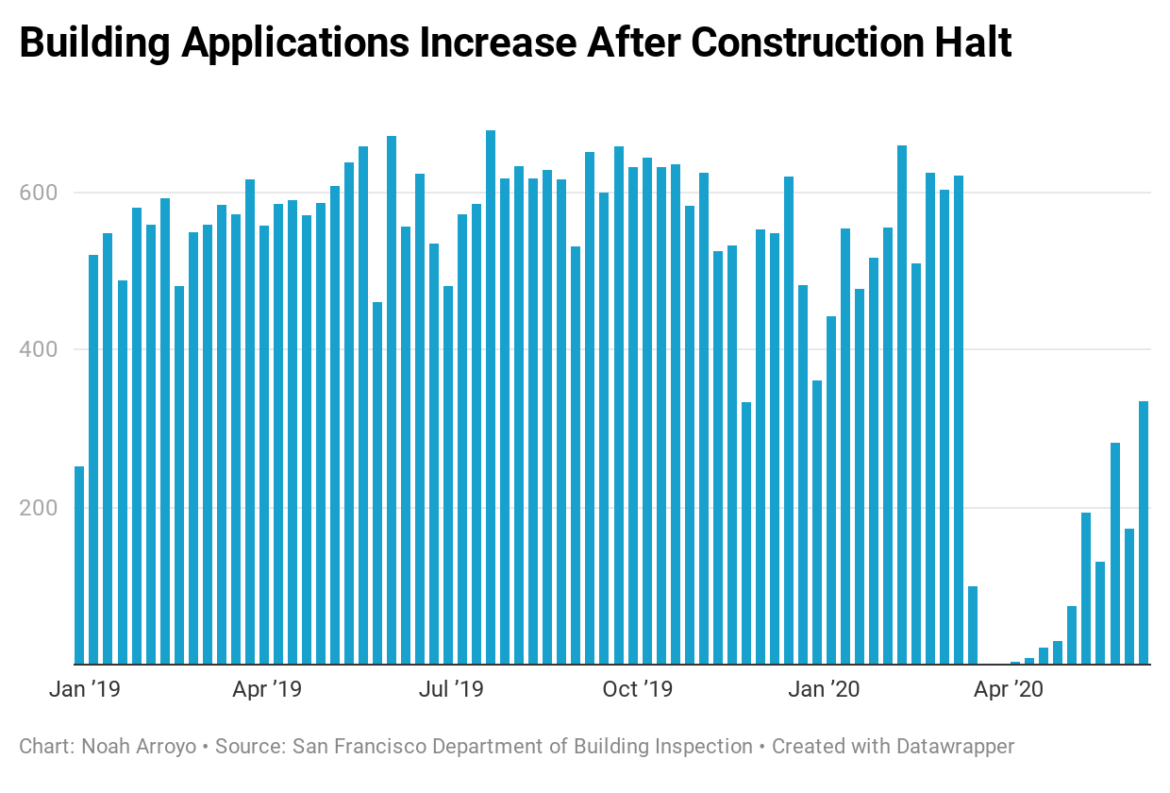 Applications for building permits have been rising since Mayor London Breed allowed construction to fully resume in early May. In this graph, each bar represents one week of permit filings. The first week of 2019 contains partial data because it began on a Wednesday.

Construction sites are coming back to life throughout San Francisco, but the surge in activity may not last long.

Builders pulled 334 permits last week, up from zero 10 weeks earlier as the coronavirus shutdown took effect. That puts construction activity at about 58% of normal. In the year leading up to Mayor London Breed’s mid-March order for construction to cease, City Hall received about 580 permit applications a week.

The number of permits has been on a slow climb since hitting zero, and began to accelerate on May 4, when Breed allowed construction to fully resume. The rise in activity largely reflects the revival of projects that were put on pause during the COVID-19 shutdown, some experts say.

Builders are getting permits for construction work that was almost ready to go by the last quarter of 2019, said Sean Keighran, president of the Residential Builders Association.

“If you’re in the construction business, you’re busy right now,” Keighran said. “You’re doing exactly what you were doing in February 2020; you’re finishing that project. And you probably have another lined up.”

The new applications have been for work like roofing, bathroom remodels, seismic retrofits and the installation of additional dwelling units.

While older projects are being revived, new projects could struggle to break ground this year due to the uncertainty the pandemic has brought to the real estate market. Residential property owners may delay construction because of concerns they won’t be able to afford it if tenants don’t pay rent. The U.S. entered a recession in February, and more than 5 million Californians have filed unemployment claims in the last three months.

Due to the ramp-up time for construction projects, “the economic impact of this won’t hit until 2021,” Keighran said.

Banks face similar uncertainty, which could stall larger construction projects, said David Garcia, policy director at the Terner Center for Housing Innovation at the University of California, Berkeley. “They’re dubious because they don’t know that the project is going to meet the financial assumptions that were in place pre-COVID,” he said.

“The problem is that I don’t think there’s a way to confidently predict that there will be a demand because there are so many unknowns now,” Garcia added. This month the median rent for a one-bedroom apartment in San Francisco dropped 9.2% from a year earlier, to $3,360, according to apartment-listing site Zumper. It was the biggest decline since 2015.

An April survey by social networking site Blind found that two in three tech workers given the option to work remotely would consider leaving the Bay Area, according to a report in Business Insider. Such an exodus could further shrink housing demand. In May, Twitter and Square CEO Jack Dorsey told employees at both companies that they could work from home permanently, even after the coronavirus pandemic passes. Facebook CEO Mark Zuckerberg later announced that up to half that company’s 48,000 workers could be working remotely within 10 years.

A drop in housing demand would do nothing to help renters already committed to leases and struggling amid the recession.

In April, almost 6% of city tenants were unable to pay rent because of financial hardships related to the COVID-19 pandemic and local order to shelter in place, according to an internal survey by the San Francisco Apartment Association. A study by the California Policy Lab found that nearly 18% of the city’s workforce filed for unemployment insurance benefits between March 16 and May 9.

And Garcia is skeptical the recent decline in rents will change market dynamics.

“I don’t think it’s going to be enough to solve our affordability issues,” he said. “We were so far out of balance from what is considered a healthy housing market that a temporary dip in prices is not going to make housing affordable to the vast majority of people who were struggling.”