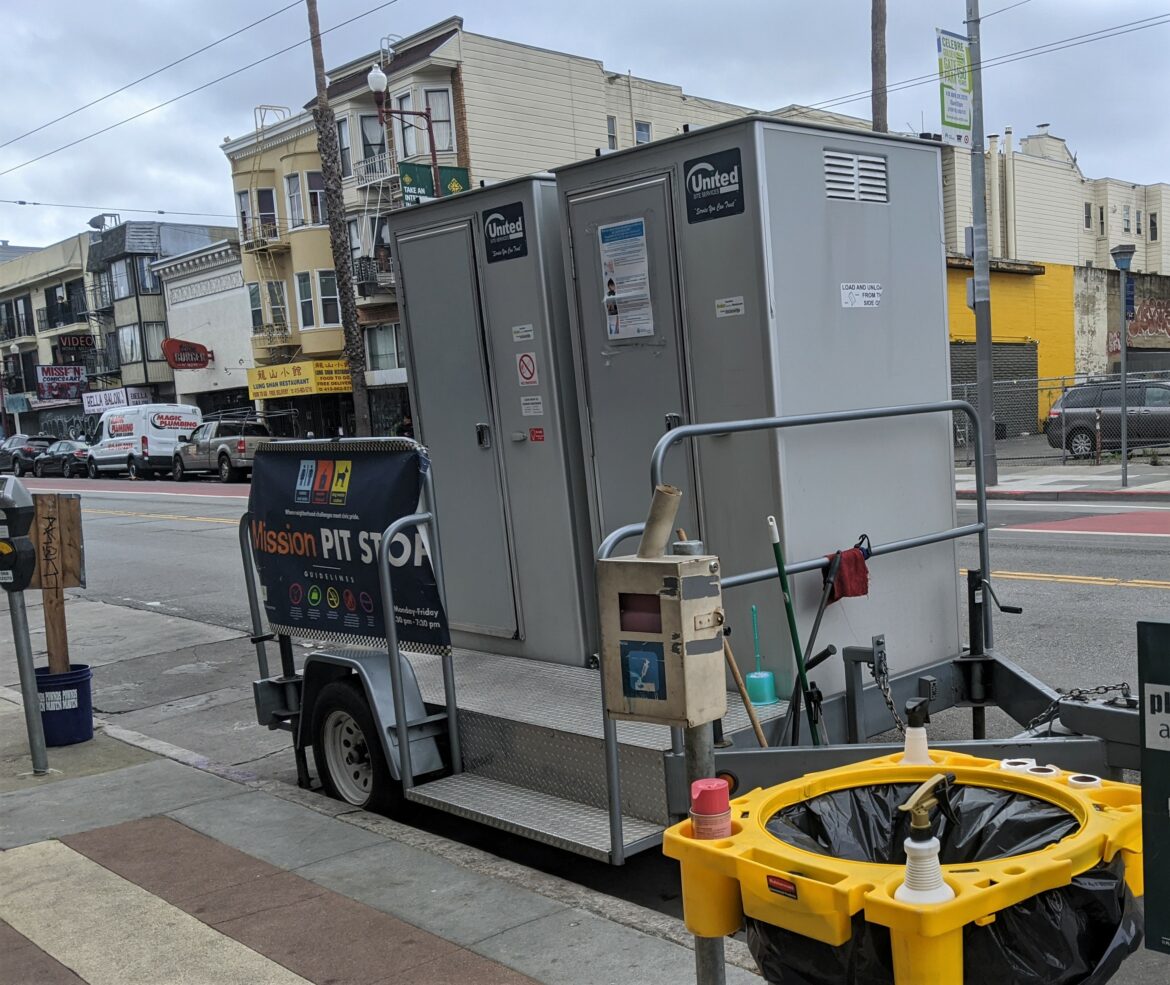 Two toilets sit on a movable trailer in San Francisco's Mission District in May 2020.

Edward Armstrong, who lives in his vehicle in the Bayview District, received an unexpected amenity shortly after the COVID-19 pandemic hit San Francisco. A mobile “Pit Stop” public toilet, complete with a hand washing station, was rolled up to the corner of Ingalls and Bancroft streets, one block from his RV. It was popular. In November 2020, people used it 1,557 times.

But then, with no notice, it disappeared. Now, Armstrong is back to trekking half a mile to a homeless shelter or several blocks to a park, where a toilet is open only a few hours a day. He has appealed for its return with staff from the city’s Homeless Outreach Team, which regularly visits the street he lives on to provide referrals and resources, with no success.

The disappearing Pit Stops are central to a Thursday hearing called by Supervisor Matt Haney, who has advocated for more public bathrooms — not just for the homeless, but for anyone. While the number of 24-hour Pit Stop bathrooms increased 16-fold at the beginning of the pandemic, keeping them in place has proven to be a challenge. Many high-traffic Pit Stops — some used more than 1,000 times per month — are being relocated, and Haney wants to know why.

“People rely on these bathrooms, they expect them to be there when they’re walking, or driving their taxi,” he said. “This is the most basic human function that people require access to for their own dignity, hygiene, and health.”

When it comes to why the availability of these bathrooms matters, Armstrong put it more colorfully: “Right now you got people who are like animals using the bathroom on the street,” he said.

The Board of Supervisors voted to expand the mobile Pit Stop program through an emergency ordinance in May 2020, in direct response to the COVID-19 pandemic. The program more than doubled from 24 toilets — with just three open 24 hours a day — to 49 toilets, all open both day and night.

But within months of the new toilets being rolled out, complaints began to roll in to the Department of Public Works from residents who live near the toilets.

Internal emails between Public Works staffers show a lack of consistency around how these complaints should be handled. Often, the conversation is spurred by neighbor complaints over Pit Stops, which are passed through community benefit districts or district supervisors’ offices to Public Works. Jeff Kositsky heads the Healthy Streets Operations Center, a multi-departmental program that addresses issues of homeless encampments through enforcement, street-cleaning, and outreach. Kositsky frequently makes recommendations on the toilets’ locations, with Public Works Acting Director Alaric Degrafinried looped in to make the final call as to which Pit Stops should stay and which should go.

This process has caused some confusion among staff. “We still have no clear understanding on what we are doing regarding removing and relocating units at the request of Healthy Streets Operation Center,” wrote Operations Manager Darlene Frohm in a Nov. 2, 2020 email to Degrafinried.

Degrafinried responded to Frohm with a list of eight Pit Stops that he said the Healthy Streets Operations Center suggested be moved.

The reasoning behind the Healthy Streets Operation Center and Degrafinried’s decisions is largely unexplained in emails between decision makers, though neighborhood complaints seem to play an important role in whether Pit Stops are moved.

In the dozens of internal emails reviewed by San Francisco Public Press, data on usage rates, or a surge in COVID-19, was never raised as a reason to keep or move a Pit Stop. City data from November 2020 on 28 Pit Stops shows they were used an average of 1,420 times a day, with monthly usage ranging from 11 visits at a station in Potrero Hill to 3,379 at Hallidie Plaza, just outside the Powell Street BART, Muni, and streetcar stops.

One of the eight Pit Stops Degrafinried approved for removal in November was at Jose Coronado Park in the Mission District. It was a popular location, used 1,758 times in November 2020. However, neighbor complaints forwarded to Public Works via staff at Supervisor Hillary Ronen’s office put pressure on the department to remove the Pit Stop. It appeared to have worked; the Pit Stop was moved in May, according to Public Works spokesperson Rachel Gordon. No reason was provided by the time of publication.

The Jose Coronado Pit Stop wasn’t the only one relocated in response to neighborhood pressure. Also in November, the East Cut Community Benefit District sent a string of emails to Public Works requesting removal of a Pit Stop at 110 Mission St., despite the fact it was used 924 times that month. Degrafinried promised the Community Benefit District it would be relocated, and the Pit Stop was moved to 23rd and Iowa streets shortly after Thanksgiving.

The release of Public Works’ internal emails discussing the Pit Stops — which were made available through an anonymous records request in December and posted on Twitter — spurred Haney to launch Thursday’s hearing, he said.

In particular, the involvement of Degrafinried in many of these decisions came as a surprise.

“It’s a pretty incredible that people who run departments that have budgets in the hundreds of millions are having back and forth email arguments about whether or not to take away bathrooms,” Haney said.

His goal for the hearing, he said, is to provide some clarity on what the Public Works process is for closing or relocating bathrooms. It could also lay the groundwork for future plans. Haney hopes to expand the Pit Stop program beyond the requirements of the emergency ordinance. He believes the city should have a certain number of bathrooms at any given time, and provide notice for residents — like Armstrong, in the Bayview — when they’re being moved.

“In many cases the supervisors of the district or community organizations are not notified,” he said. “That is a problem. There needs to be oversight of these bathrooms.”