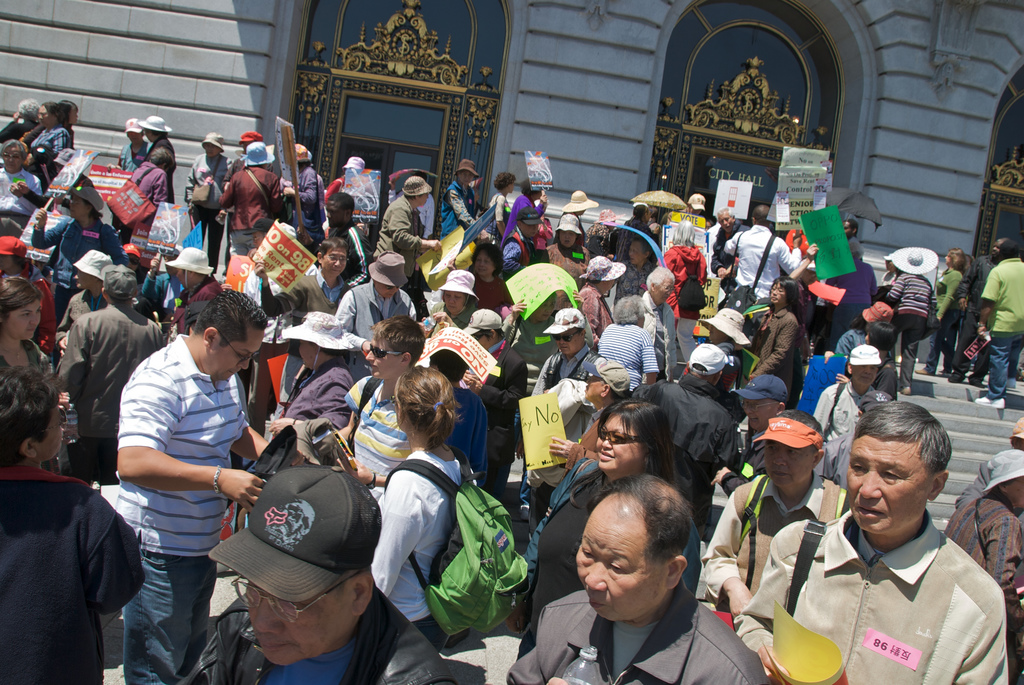 San Francisco voters voiced support for rent control at this protest against Proposition 98 in 2008, long before the current crisis escalated. (Prop 98 would have rolled back rent control statewide.) Creative Commons image by Steve Rhodes.

A city councilmember in San Jose has said he may propose strengthening his city’s loose rent controls in an effort to keep at least some housing there affordable for moderate-income residents.

But rents in Oakland continued to soar after it made the same move last summer, tightening its limits on rent increases and on the share of the cost of improvements that landlords can pass along to tenants in controlled housing. The median listing for a two-bedroom in Oakland cost $2,270 as of February, according to one ranking.

Few other solutions to the Bay Area’s housing crisis have emerged, and it’s clear that even San Francisco’s stringent controls haven’t kept a lid on evictions or rent increases. For one-bedroom units, San Francisco ranked highest, as the Public Press reported, beating out New York, Boston and Washington. Oakland took fifth place at $1,980 and San Jose sixth at $1,900. For two-bedrooms, San Jose ranked fifth with median rent of $2,380, behind Los Angeles and ahead of Miami.

And tightening controls here may not help, especially given the restrictions imposed by state law.

Other recent proposals in San Francisco for pursuing housing affordability include a moratorium on new housing in the Mission District and a tax on new home sales citywide to fund construction of affordable housing.