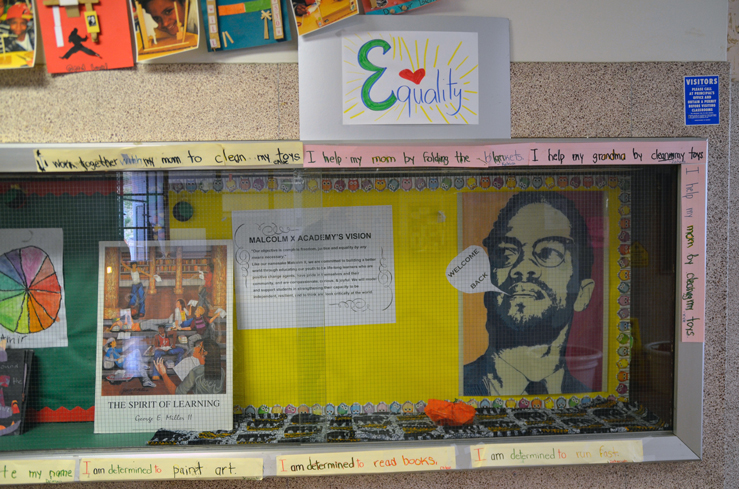 Malcolm X Academy in the Bayview is decorated with brightly colored murals of the school’s namesake, maps of Africa and the motto of both the slain black leader and the school: “by any means necessary.” Photos by Rob Waters // San Francisco Public Press

Malcolm X Academy sits atop one of the peaks that gives the Bayview district its name. It has commanding views of the bay and downtown San Francisco. The front of the school is decorated with brightly colored murals of the school’s namesake, maps of Africa and the motto of both the slain black leader and the school: “by any means necessary.”

That motto is being tested as the school and its 105 students — up from 90 last year — share space with 90 pre-kindergartners, kindergartners and first graders attending a new charter school in the same building, KIPP Bayview Elementary.

Thirty-one years ago — when teacher Gina Bissell began working at Malcolm X, and the district still bused children to achieve racial balance — it had more than 400 students and was ethnically diverse. For the past seven years, its census has fluctuated between 90 and 120, according to former principal Elena Rosen, who left the school in June. About 70 percent of students are African-American.

See: Charters vs. District: The Battle for S.F. Public Schools

On a Thursday morning before summer recess, a group of children in red shirts walked up the path to the school, holding onto a long belt and their teachers’ hands. They came from a neighborhood preschool to get a glimpse of the school they’d soon attend — a way to help them feel comfortable, Rosen explained. She welcomed them and led them down the hall to join a kindergarten class for circle time.

After a few minutes, the kids headed to recess, each kindergartener holding hands with a preschool buddy. While the kids romped on the large school playground, kicking balls, tossing Frisbees and jumping off a climbing structure, Bissell offered a reporter a school tour.

Bissell, a reading recovery teacher, showed off her room, a corner space with bookshelves, posters and a small table for working with kids one-on-one or in small groups. Every day, she pulls 15 to 18 kids who are reading below grade level out of their regular classroom to help them. While this work could happen on the sidelines of classes, that can cause “noise and interruptions — and students less focused on learning,” she said.

Since KIPP moved in and took over six classrooms, Bissell is sharing her space with a Malcolm X resource teacher who helps children with special needs. Their meetings are supposed to be confidential, so Bissell and her colleague must figure out how to manage the space and protect the children’s privacy.

As Bissell talked, a thin 8-year-old boy came in and gave Bissell a hug. He transferred to Malcolm X six months earlier and has since moved up four reading levels. “I get a lot of help from Miss Bissell,” he said. “She’s my favorite teacher.”

At his old school, he said, he had stomachaches and got in trouble for staying too long in the bathroom, ending up with six suspensions. Now, he likes coming to school.

Bissell worries that the strict behavioral rules employed in many charter schools won’t work for kids like the young boy. “It’s too rigid,” Bissell said. “He‘s thriving in a environment where it’s more engaging and activated. He’s built trusting relationships with adults and wants to be here.”

On the second floor, an outdoor education classroom used four days a week was lined with seedlings and potting soil. Two doors down, a therapist worked one-on-one with a child. These classrooms, and others used last year by Malcolm X’s after-school program, have now been turned over to KIPP.

Malcolm X has made progress in recent years. By the end of last year, 72 percent of Malcolm X students were reading at or above grade level, up from 55 percent in previous years, Rosen said, the result of experienced, collaborative staff members providing intensive resources and forging partnerships with community programs.

The sudden decision in May to place KIPP at Malcolm X left staff, students and parents feeling anxiety and worried that some of their fragile progress may be undermined. “It’s hard to share our space,” said librarian Deirdre Elmansoumi. “But we are trying to be cordial and make the most of it.”

Despite the tension, Malcolm X’s new principal, Marco Taylor, and KIPP Principal Allie Welch each pledge to be cordial, professional and positive. “We are committed to being good neighbors,” Welch said in an email. That may get more difficult in the years ahead as KIPP tries to expand, adding one grade each year for the next three years on the way to becoming a pre-kindergarten to 4th-grade school.