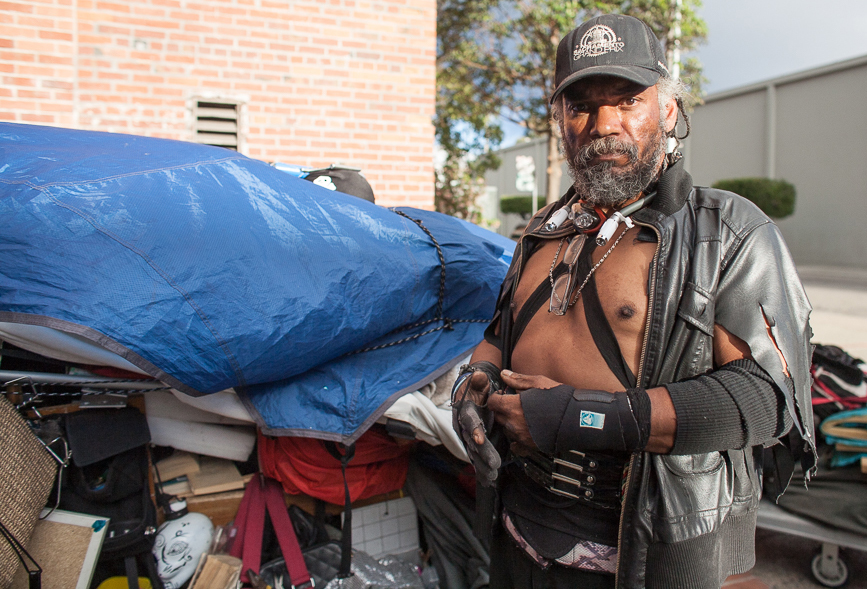 Kane, camping near Showplace Square at 15th and Utah streets, says police tell him to move from site to site. Sitting or lying on the sidewalk has been illegal in San Francisco since November 2010, when a majority of voters empowered police to fine, and sometimes arrest, people for the offense. Photo by Eric Lawson / San Francisco Public Press.

Part of a special report on homelessness and mental health in San Francisco in the fall 2014 print edition.

It started as the summer weather descended on the Mission District: Shabby tents popped up in clusters of three or four along residential streets at dusk. Then came the human waste. Then the drug dealing and the thefts.

The marked increase in homeless encampments in the Mission, Potrero Hill and nearby neighborhoods has led residents to complain of their sense of powerlessness and insecurity with the proliferation of extreme poverty, grime and crime on their doorsteps.

While the spread of the encampments is hard to quantify because of the nomadic culture on the streets, neighbors say they were unprepared for the change. Some say it was due to a mass migration from the Civic Center and Mid-Market areas as police step up enforcement of the “sit-lie” policy that restricts loitering and sleeping on the streets.

BART police have made efforts using the sit-lie policy to aggressively clear out the Powell and Civic Center stations to keep corridors safe for emergency situations, the San Francisco Chronicle reported in July. The paper also reported that Mayor Ed Lee has made it a priority to clean up the Mid-Market area. Police Chief Greg Suhr said he “takes orders straight from the mayor” and has doubled foot patrols.

So it is no surprise that efforts to clean up one neighborhood are shifting these problems to another, where residents say enforcement seemed relatively lax.

Dufty, director of the city’s Housing Opportunity, Partnerships and Engagement program, said the streets of the Mission District are more comfortable and convenient for outdoor living than areas closer to downtown. “It is safe enough, and seems to work for them enough that they are willing to move for an hour,” he said. The sense of frustration among residents is palpable. At the community meeting, residents expressed a complex mix of fear and disgust, and asked city officials and police to fix the problem. But not everyone is scared of the rising population of homeless people in the neighborhood.

Monica Pereira, an urban planner, owns a home in a three-story renovated Victorian building with her husband. While she agrees that the Mission has become a “dirty neighborhood,” she said she wanted to shift the conversation to generosity and community. She attended the meeting to see what options were out there for her new house guest.

Pereira did something few of her neighbors would contemplate: She befriended a homeless man, and ended up inviting him into a semi-detached room in her home so he could get back on his feet, apply for city and state benefits and interview for jobs. So far, she said, he seems to be making progress despite problems getting help through the slow and dysfunctional welfare system.

The town hall-style meeting, organized by residents of the Mission and Potrero Hill, filled an auditorium at Bonhams auction house near Highway 101. The gathering served as a platform for numerous complaints. While officials offered no firm ideas about solutions, they said they had stepped up policing, street cleaning and outreach.

On any given day, about six tents stand beneath the looming, noisy intersection of interstate highways 101 and 80, nestled at the junction of the Mission, SoMa and Potrero Hill. The freeway overpass offers some protection from the elements during the colder seasons.

“It’s quiet at night,” Dufty said. “The people who I talked to who have been camping here say it’s very safe here, and the people watch out for each other.”

Billy Bean, a Bonhams employee and co-organizer of the meeting, said that while the homeless find safety there, longtime residents feel the community overall is becoming less safe. He said he perceives the street population becoming younger and more aggressive.

“Now there are broken-into cars, stolen bikes, shady drug activity and growing fear,” Bean said. “It’s more a changing of population than an increase of encampments.”

Gregory Dicum, a resident of the Mission for 15 years, criticized police Capt. Daniel Perea of Mission Station for not providing enough foot patrols. He said Perea was “throwing up his hands” to absolve himself from responsibility.

Perea told Mission Local, a neighborhood news website, that “enforcement is ineffective, because it only temporarily displaces the encampments. Further enforcement is not going to correct this.”

“I could go to all these places every day and give tickets to everybody,” he said. “But if I give someone who’s homeless a citation, they’re not gonna stop. And nine out of 10 times they say ‘no’ to shelters. We just have no answer to this.”

But Dicum also conceded that Mission Station was understaffed, and that homelessness was a citywide issue that could not be addressed by police in just one neighborhood.

“At the end of the day, what we believe or suspect is not enough to place somebody under arrest or to take them away,” Capt. Robert O’Sullivan of Bayview Police Station told residents at the community meeting.

But one homeless man by the name of Kane said police often “insist” that he move from site to site, using the 2010 sit-lie law.

The police are also responding to poor sanitary conditions on the streets, which are distressing to residents. Problems include human feces, used condoms and drug needles, as well as increased vulnerability to sexual harassment.

Larry Stringer, director of operations at the Department of Public Works, said he is organizing “alley crews” to visit 50 sites a day.

“One of the biggest challenges when alley crews clean,” he said, is that “the homeless return to the 50 sites to make another mess.”

The crews work with the police and Dufty’s team at the mayor’s office to ask the homeless to leave so they can clean the sidewalks.

But Kane said that despite the increasing complaints from neighbors, not much has changed recently in terms of enforcement and cleanup.

“We’ve been here off and on for years. They’ve been doing it everyday,” he said, adding: “I wonder how much it costs for them to stand around while they watch us pack.”

Another Type of Response

But the range of discussion about options for dealing with the street population seems limited to Monica Pereira.

Early in the fall, she took in a homeless man who moved to San Francisco earlier this year. A Venezuelan native, he moved into a “glorified storage room” attached to the garage.

She invited him to stay after meeting him two or three times and learning that he had the potential to get back on his feet with a little bit of help. What convinced her was when he asked her to watch his dog while he attended a job interview. She said she hopes her assistance will help expedite his journey out of homelessness.

“He didn’t look homeless, he looked poor, just someone in a bad situation that needs help,” she said.

The man had been living in San Francisco for about four months. Trained as a boxer, he came to fight in the United States for a South American boxing club and stayed. Since then, he has worked odd jobs in pest control and casinos in Las Vegas. While he does have a green card, Pereira said, he does not have enough money to apply for citizenship.

Pereira acknowledged that the man’s situation was unusual, and she had a gut feeling that she could help him.

Pereira also bought the man a bus pass and a prepaid cellphone. In return, he sweeps the front yard daily and sometimes cooks traditional Venezuelan dishes for Pereira and her husband, Kevin.

The homeless man’s room had bright blue walls and low ceilings. The full-size bed was made up neatly. When Pereira opened the door, the man’s small black dog, Negrita, raced out and jumped on her shins.

The homeless man has been working with a case manager at the Human Services Agency to get public benefits, but it has been hard. She wrote to the case manager on the man’s behalf, saying she did not want to charge him for rent, urging the city to help him with housing, “and a job, so that he can support himself.”

City shelters are not an answer for everyone, said Jennifer Friedenbach, executive director of the San Francisco-based Coalition on Homelessness, an advocacy group. Most of the shelters scattered across the city are at capacity nightly, offering space only to about 1 in 5 homeless people, she said. Those who cannot secure spots must fend for themselves.

Sanne Bergh graduated with a degree in Literary Journalism from UC Irvine, where she was a staff writer and photographer for the New University weekly newspaper. She has also written for the San Mateo Daily Journal, Orange Coast Magazine, and she was editor for Kiosk Magazine, an online literary journal. Find her on Twitter: @sanne_bergh