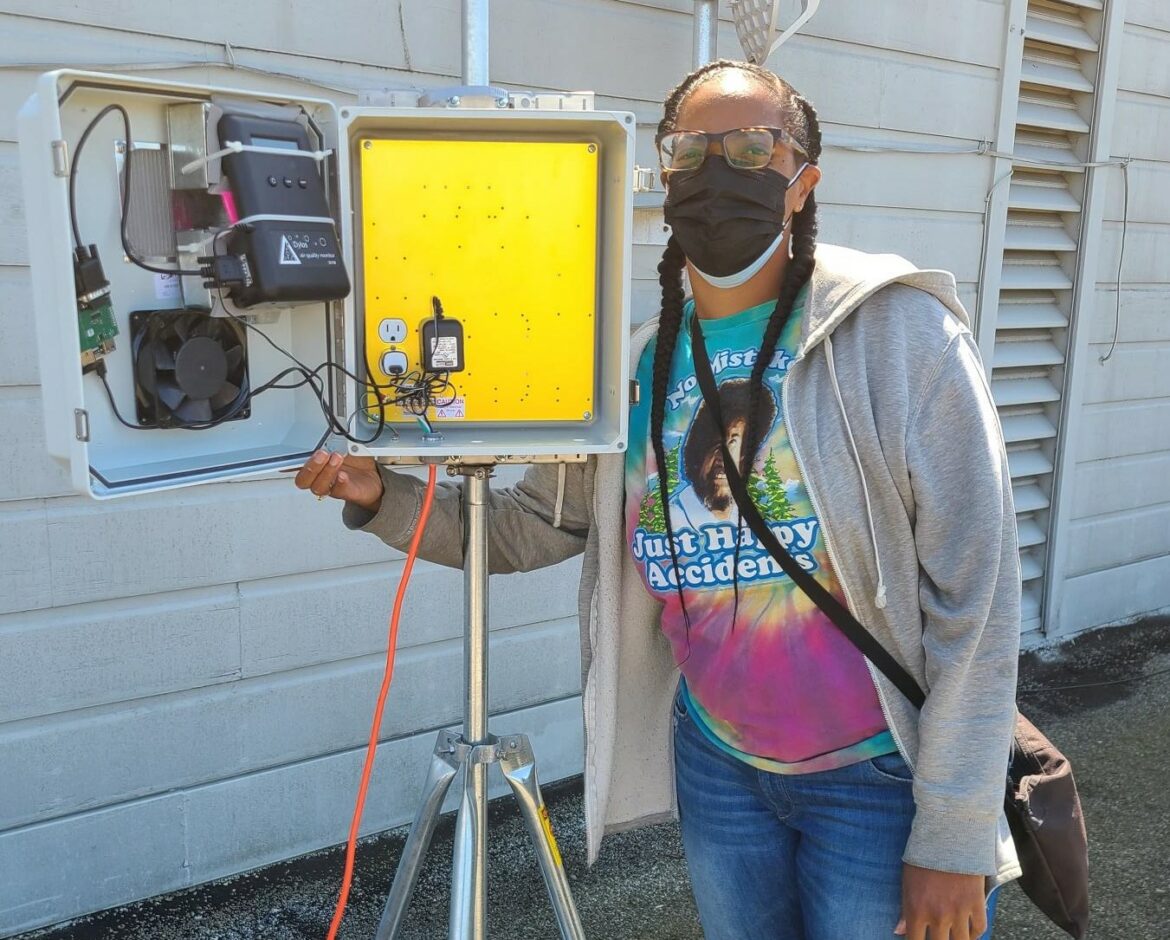 Environmental activists are about to launch an air-monitoring project to track pollution linked to high rates of asthma and other health conditions in San Francisco’s Bayview-Hunters Point neighborhood.

The first data readouts will likely be publicly available by the end of August, according to the organization running the project.

The results could play an important role in demonstrating the environmental harm residents suffer. State data show that the Bayview is the San Francisco neighborhood with the greatest pollution burden, based on exposure to harmful environmental substances and how vulnerable residents are to them due to socioeconomic and other factors.

“The people living here are more at risk than the rest of the city,” said Dalila Adofo, the project’s coordinator.

The Bayview lies east of Highway 101, in the city’s southeast corner, and is buffeted by freeway exhaust and other harmful pollutants. Other contributors include the many industrial operations that weave through the neighborhood, like an animal-rendering plant, a wastewater treatment plant, warehouses and smaller businesses like auto service shops.

The data is being gathered by Greenaction for Health & Environmental Justice, an environmental justice activist organization, in collaboration with community and technical partners. Greenaction is poised to use the data in its political activism to reduce pollution from current sources and oppose future industrial development that would bring more, said Bradley Angel, the group’s executive director. It will enable “direct action, jamming public hearings, filing complaints, getting media coverage, mobilizing communities, pressuring elected officials,” he said.

This is not the first air-monitoring project to happen in the city. Nonprofit Brightline Defense Project has set up sensors in other neighborhoods, including the Tenderloin and South of Market, and is tracking air quality in single-room occupancy hotels.

The new air sensors in the Bayview form the Marie Harrison Air Monitoring Network, named after a neighborhood advocate and environmental activist who died of lung disease in 2019. The group and partner organizations have installed seven sensors in the Bayview, with plans for two more, using a $500,000 grant from the California Air Resources Board.

Greenaction has done extensive community outreach and work with other local groups to select the sites and get the network operational. Tracking California, a nonprofit with expertise in compiling and analyzing health and environmental data, in cooperation with staff at the Bay Area Air Quality Management District, helped set up the project.

Members of the public will be able to access the air-quality information on the website IVAN Bayview Hunters Point, Adofo said. IVAN stands for Identifying Violations Affecting Neighborhoods; the site lets residents report illegal dumping and other environmental problems.

People who want to avoid bad air will also be able to sign up for email alerts triggered by sensor readings.

The network will monitor the air in residential areas for microscopic solid and liquid pollutants called particulate matter. The sensors detect tiny particles that can enter the body and exacerbate respiratory or heart issues.

“They’re really, really small. You can’t even see them, from dust, dirt, construction, even driving — not only exhaust but when your tires grind the road,” Adofo said.

Asthma afflicts about 10% of adults in the 94124 ZIP code, which contains the Bayview, outpacing all other parts of the city but Treasure Island, where the rate is about 11%, according to 2018 data published by the University of California, San Francisco. The Bayview also has the highest rate of emergency-room visits driven by asthma.

Health officials have known about these disparities for decades. A 1997 study conducted by doctors from UCSF and the city’s health department, found the neighborhood led in rates of asthma and other health conditions like congestive heart failure and hypertension.

In light of this health information, Adofo said groups were long overdue for new air-quality data that could better guide local land-use decisions.

“It’s ridiculous that we’re in 2021 and that the southeast sector of San Francisco is just now getting a local monitoring system,” she said.