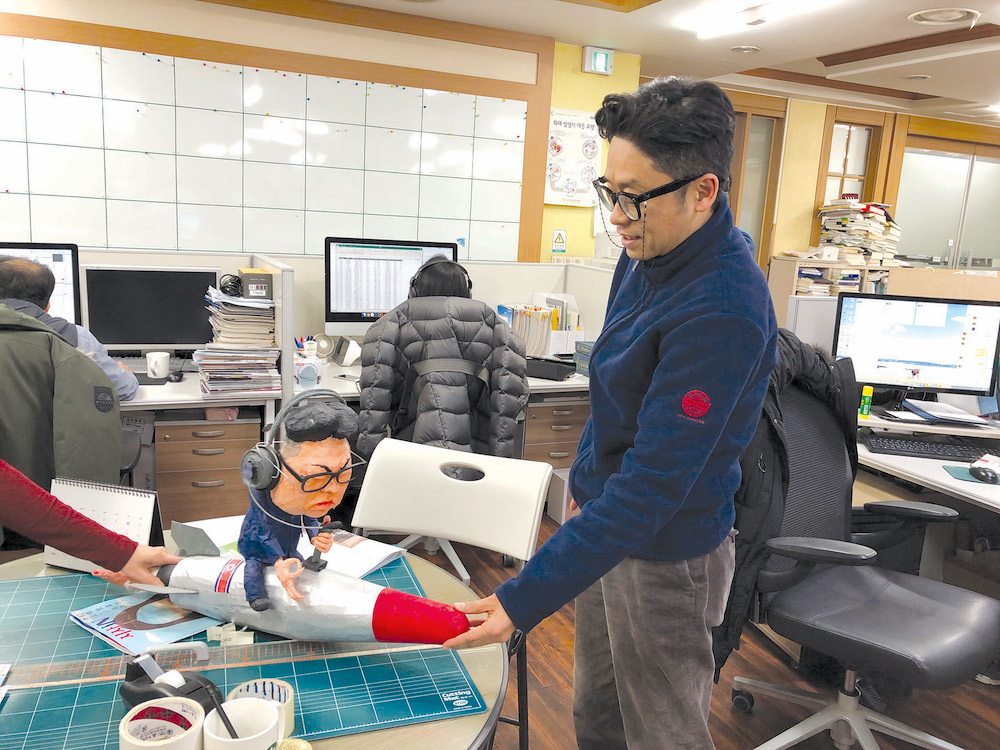 Top: Je Kyu Ko, editor of Sisa-IN, with a papier-mâché caricature of North Korean “Rocket Man” Kim Jong-Un. Below: Speaking at the Korea Press Center in December, and a visit to Sisa-IN’s headquarters with INN director Sue Cross.

Corruption of national leaders. A fragile democracy teetering between constitutional order and authoritarianism. A desperate populace leaning on journalists to hold the powerful to account.

While those patterns resonate in many countries — and the news cycle suggests the United States in early 2020 — it’s encouraging to know that journalists across the globe are working bravely to create independent muckraking institutions.

That is my take-away from a December trip to South Korea, where a vibrant new journalistic culture has taken hold despite the constant threat of government corruption and control by dominant corporations. Previously under an authoritarian military-led government, South Korea has in recent decades begun embracing democratic norms. That has eased constraints on the press, which in turn appealed to the public for direct support. The emerging civil society there has heeded the call.

I was invited by Sisa-IN, the largest-circulation weekly news magazine in the country, to give a talk at a half-day conference on investigative and nonprofit journalism at the Korea Press Center. Editors and reporters there were eager to hear how independent newsrooms in the U.S. have in the past decade attained a market niche that legacy media abandoned. I was joined by reporters Gwanyul Cheon from Sisa-IN, Inbo Sim from NewsTapa (aka the Korean Center for Investigative Journalism), Joonil Kim from fact-checking site NewsToF, and Sue Cross, executive director of the Los Angeles-based Institute for Nonprofit News.

Sisa-IN has a compelling story. The worker-run company started 13 years ago after Wan Soo Pyo and colleagues at another magazine, Sisa Journal, objected to the censorship of an article critical of Samsung. With Pyo as its CEO, Sisa-IN went on to overshadow its progenitor. It rocked the Korean establishment in 2017 by publishing a series of text messages between Jang Chung-gi, a vice president of the Samsung Group, and media executives who were requesting favors. It illustrated the cozy relationship among multinational corporations, the press and government, as well as the regular threats by corporations to withdraw advertising if journalists are too critical. “As the advertising revenue model, an axis that has sustained journalism for many years, is facing crisis, nonprofit journalism is often talked as an alternative,” Pyo said in his invitation to the conference. “‘Small but strong’ nonprofit media have confronted issues that mainstream media have given up or have failed to cover.”

The seven-year-old nonprofit NewsTapa has a budget of about $5 million and more than 31,000 individual donors. In a country with little culture of philanthropy, it operates without any support from foundations — something few U.S. nonprofit newsrooms could contemplate. It has dozens of staff, and has built a television studio, community theater and coffee shop in the complex where it operates.

In the U.S., as free speech faces increasing direct threats from those in power, alternative and nonprofit news startups can find inspiration and solidarity by looking to counterparts overseas that palpably underscore the role of the press as a defender of democracy.