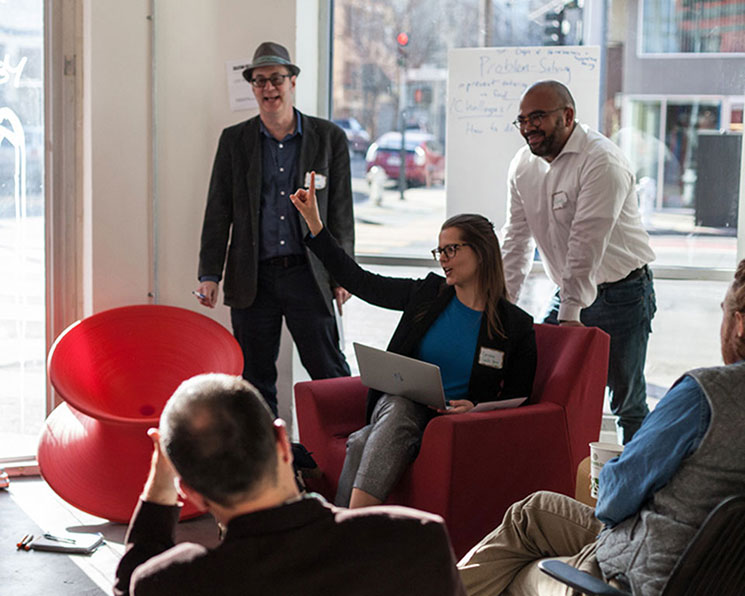 At the Impact Hub in the Mission District, a workshop tackled problem-solving for initiatives by the Department of Homelessness and Supportive Housing. Photo by Garrick Wong // San Francisco Public Press/Renaissance Journalism

It was a dizzying day at our Jan. 25 conference, Solving Homelessness: A Community Workshop.

With dozens of speakers and hundreds of side conversations among the 200 attendees, it was clear that the reporting we’ve done at the Public Press to gather and investigate just a few of the most intriguing ideas for solutions to the human rights crisis playing out on our streets daily has just scratched the surface.

By engaging the community, we opened ourselves up to criticism but also reaped the reward of an activated public. Many attendees — neighbors distressed by the sight of people living on the sidewalks and in marginal shelters, as well as subject experts who have devoted their lives and careers to helping stabilize people’s lives — said they learned new things and got inspired to follow up with proposals for fixes to broken systems.

I was surprised to learn a few things too. Here are 10: Did you attend “Solving Homelessness: A Community Workshop” on Jan. 25? Did you come away with other assessments? What made a big impression for you? What are the most promising — and most problematic — proposals for solutions? Add your thoughts in the comments below, or on our Facebook page. And sign up for our email newsletter for updates and follow-ups on the event.