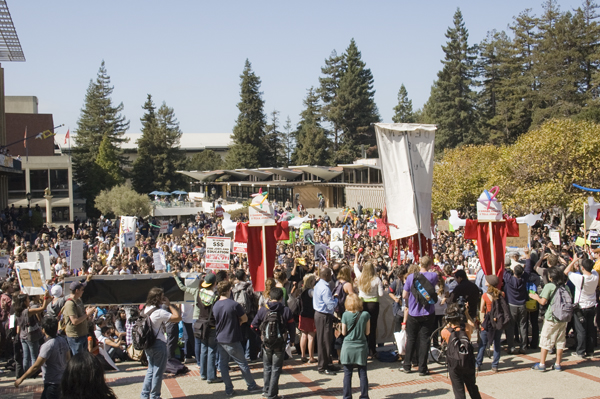 Rosemary Macaulay, Intern |
LikeTweet EmailPrint More
Students and workers at the University of California continue to protest against the accumulated budget cuts to public education, but it has been harder to galvanize this year’s crop of would-be education activists, in part because a last-minute budget restoration in early October meant the cuts, at least this year, would not go any deeper.
The apparent success of last year’s rallies may in part be responsible for this year’s relatively low-key demonstrations. The hundreds of students, faculty and staff who gathered in Sproul Plaza for a Day of Action last Thursday at UC Berkeley got a morale boost when they were reminded that Gov. Arnold Schwarzenegger’s chief of staff said their protests last year were a deciding factor in restoring millions to the UC’s budget.
The state Legislature had cut the university system’s 2009-2010 budget by $637 million. The 2010-2011 budget restores $305 million. Of that, $199 million will come from the state’s general fund, and $106 million from American Recovery and Reinvestment Act funds. In total, funding for the university is $370.4 million more than last year. The $370.4 increase is made up of the $305 million restoration, $51.3 million for current students previously not funded by the state and $14.4 million for increases in health care costs for UC retirees.
“But you shouldn’t be too happy,” said student organizer Ricardo Gomez at the rally, “because they’re getting that money by cutting K-12 education.” (In the 2010-2011 budget, funding for primary and secondary education has been slashed by almost $2 billion.)
The effects of last year’s deep cuts are still being felt. In addition to student fee hikes and the 200 staff layoffs at Berkeley to be completed by January 2011, the cuts have resulted in many classes being full, preventing some students from taking the courses they needed to graduate. The university also reduced childcare subsidies for student parents, cut pension plans of campus staff and increased outsourcing of workers.
Though hundreds of students ended their protest with a sit-in at the university’s Doe Library, many said the day was quieter than last year’s events, which followed a 32 percent student fee hike.
“There was a more visceral reaction last year,” senior Nathan Laurie said. “It was a gut reaction from the student body.”
Top university administrators acknowledged the protesters’ demands, issued earlier that day, with a letter: “Although we cannot respond to all of the demands for which you are fighting, we do support the cause of continuing to raise your voices to inform the California public of the need to continue to invest in public higher education.”
“It’s important to show that cuts are making a difference in the daily lives of students,” Laurie said.
In an acknowledgement that this year’s budget poses less of an immediate crisis for the school, instead of focusing just on the current budget, students, staff and faculty brought up a wider range of problems, many structural.

Among the demonstrators were campaigners for Proposition 25, a proposal to restore the majority vote in the state Legislature for passing a budget.
“If Prop. 25 passes,” graduate student Emily Gerth asserted, “it will restore funding for the UCs.”
She acknowledged that while many of the funding problems were interrelated, the variety of issues being discussed at the protests might be confusing. “We have similar goals but there’s a mixture of demands and it complicates the message,” Gerth said.
Philippe Marchand, president of the Graduate Assembly, held a class, or “teach-out,” to discuss Operational Excellence, a review of the Berkeley campus’ administration and services. The report, conducted by consulting firm Bain and Co. and adopted by chancellor Robert Birgeneau in April, identified potential savings of $93 million to $135 million on top of last year’s cuts. The initiative includes the recommendation to eliminate 200 staff positions at Berkeley.
Marchand said the real problem now was not state budget cuts, given the amount of money being restored, but structural change on campus.
Other protesters said they felt differently. Michael Cohen, a lecturer in American and African American studies, said Berkeley administrators did not control their own destiny.
The UC regents and President Mark Yudof “run the show,” Cohen said. “Those on the Berkeley campus — the chancellor and vice-chancellors — are caught in the middle.”
Many other issues played significant parts in demonstrations. The demands issued to Berkeley administrators included calls to increase enrollment of students from underrepresented communities, provide funding for undocumented students, fully fund ethnic studies, and rescind the 2012 admissions policy. They also discussed the labor rights of graduate student instructors, who earn $16,000 a year — $600 of which they pay back in campus fees — and are currently embroiled in contract negotiations with the UC.
To others, the budget restorations are potentially a distraction from the diminishing vision of more open access to public education.
“The University of California should be free,” Cohen said. “It was once, and it can be again.”

Rosemary is from London and graduated this summer with a B.A. in Classics from Oxford University, where she was Editor of the student newspaper, The Oxford Student.