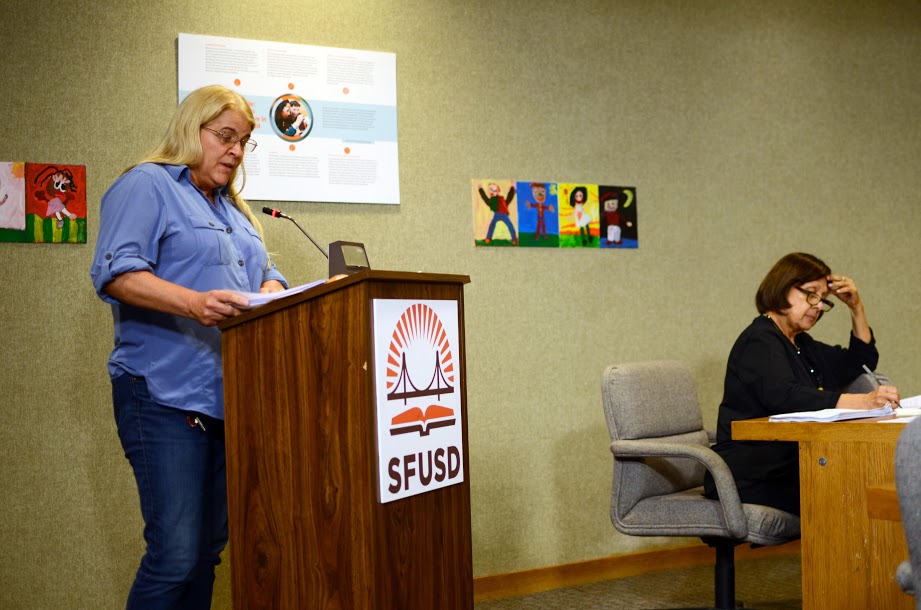 Lisa McMillan, a parent, told school board members on June 9 that she disapproved of the current school assignment policy, which requires some children to travel alone on public transportation to schools across town.

All the members of San Francisco’s Board of Education agree that the city’s public schools should be more racially, ethnically and economically diverse, but they have not been able to settle on the first steps to take.

The Public Press reported in January that already pervasive segregation has increased in San Francisco public schools in the five years since the newest school assignment policy was implemented in 2010. At the beginning of that period, there were 24 schools where at least 60 percent of students belonged to a single race or ethnicity. Now, there are 30.

Board members addressed racial isolation during their last two open meetings, but they also struggled with parents’ desires to send their children to better and more convenient schools.

On Tuesday, they voted 4-3 against a change in the school assignment system that co-sponsor Sandra Fewer said would give “parents a little bit more assurance about” how the process works.

The change would have ensured that, in assigning students to a given elementary school, the district gave preference to those who live nearby over those who live near a school with low average test scores. Titled “Support for Equity in Student Assignment,” the proposal would have moved away from the current assignment system’s emphasis on offering all families choices of schools that perform well and giving preference to children from neighborhoods with underperforming schools.

A doctoral student at Stanford University named Matt Kasman ran simulations last year of what would happen if the resolution were implemented. Kasman concluded that it would increase racial isolation but only slightly because it would affect only a few dozen students.

Board member Rachel Norton, who co-authored the resolution, said that she did not give much weight to the simulations because they were based on choices available in the current system, while parents might behave differently if the resolution were adopted.

Members who opposed the resolution said that they wanted the district to take bolder steps.

“It would be a small change that would make it worse for the disadvantaged,” board member Jill Wynns said.

Board Member Shamann Walton, who also voted against the resolution, suggested that the district instead make underperforming schools more attractive to all parents by introducing language, science, technology and arts programs.

Norton said she was disappointed and surprised that the board could not reach agreement. “We tried to articulate that we don’t want to have schools of last resort anymore,” she said.

“Instead of encouraging people to leave the area where they live,” Fewer said, the group wanted to “encourage them to look first at those schools in their areas and help us build those neighborhoods while we’re helping to build the strength of the school community.”