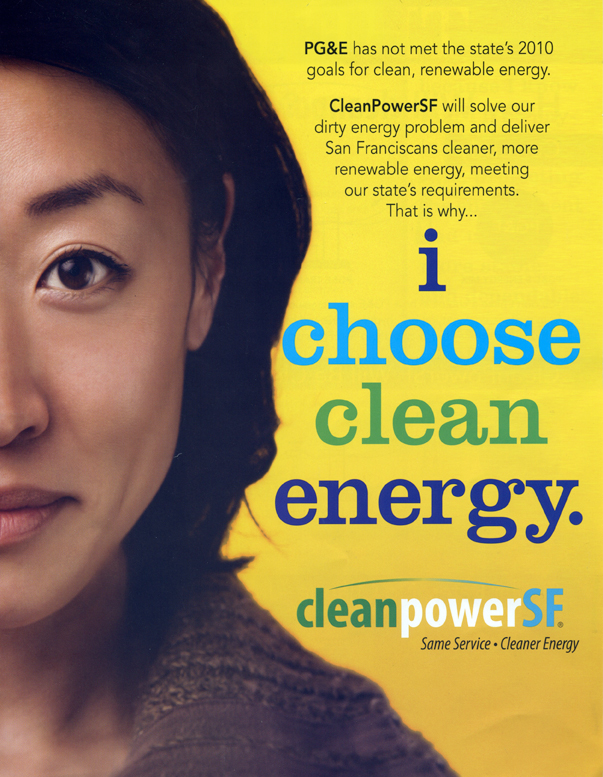 CleanPowerSF is the city’s name for a community choice aggregation program. It would supply consumers with power generated from sustainable sources and be delivered via PG&E’s electrical grid. Image: CleanPowerSF mail flier.

San Francisco’s budding green-energy program, having survived a statewide initiative that would have killed it, seems clear of all roadblocks, except one: economics.

After the failure of PG&E-backed Proposition 16, which would have required two-thirds voter approval for local power programs, the city pushed forward with community choice aggregation, which would replace PG&E power with a locally run alternative.

But finding a way to meet or beat PG&E rates has been a challenge. That task falls to the San Francisco Public Utilities Commission, which two weeks ago failed to come up with a contract with the company chosen to implement the city’s clean-energy program.

Power Choice, a startup consortium that includes GE Energy, Oracle Corp. and real-estate giant Grubb and Ellis, among others, wanted the city to back a $400 million loan to help kickstart the CleanPowerSF program. One of its goals was to keep rates close to PG&E’s.

San Francisco, which faced a $483 million deficit for the past fiscal year — and a possibly larger hole next year — did not want the risk.

Last April, as the utility was scrambling to have a contract finalized before Proposition 16 went to the ballot, commission General Manager Ed Harrington tried to play down any expectations that renewable energy would be cheaper than traditional sources: “You can’t charge PG&E rates and get wind and solar.”

Supporters say CleanPowerSF would provide a cleaner alternative to PG&E. But it will be difficult to meet its goal of 51 percent renewable energy by 2017, while keeping prices near PG&E’s. If not, San Francisco residents may simply opt, through their individual choices of power providers, to stay with PG&E.

In an effort to keep costs down, the program is looking to using renewable energy credits, which allow energy providers to make their portfolio greener without actually using the renewable energy.

“You can have your resource commitments be all brown power,” said Barbara Hale, assistant general manager of the utilities commission’s Power Enterprise department. “And you can green it up by purchasing RECs.”

The city may also lose in-city energy clean-power generation because of concerns about the time-consuming process of meeting California Environmental Quality Act guidelines for each project.

“That will take some time,” Hale said. “We want to be sure to launch the program as early as we can.”

Members of San Francisco’s Local Agency Formation Commission are worried that the power program will lose much of its appeal if it relies on energy credits and loses another selling point — job creation in the city for clean-energy-generation projects.

Use of bonds urged

Michael Bornstein, former director of the Sierra Club’s Bay Chapter and current formation commission member, said the Board of Supervisors should issue revenue bonds for renewable energy projects, which voters authorized with the passage Proposition H in 2001.

“Whatever we can do through this program to create jobs today,” Bornstein said, “is really going to be a big benefit.”

Without energy generation in the city, the percentage of energy credits needed goes up. Supervisor Ross Mirkarimi, chairman of the formation commission, said that he wanted to “lessen the role of RECs as much as possible.”

But the problem of meeting or beating PG&E’s prices persists.

The utilities commission is rewriting guidelines for prospective energy companies, and hopes it will have a contract by the end of 2010. If all goes as planned, CleanPowerSF will be delivering power to San Francisco residents sometime in early 2011.

Any energy company applying to run the city’s program must be able to assume the financial risk of delivering green energy while keeping rates near PG&E’s. And it should be prepared not to see a return on the investment for a few years.

The utilities commission is requiring any company bidding for the project to establish an energy portfolio and tell the city what rates will be.

The failed $46 million Proposition 16 has been a cause for celebration for city commissioners, and they are planning a party to celebrate its defeat. But that does not make the task of figuring out what comes next any easier.