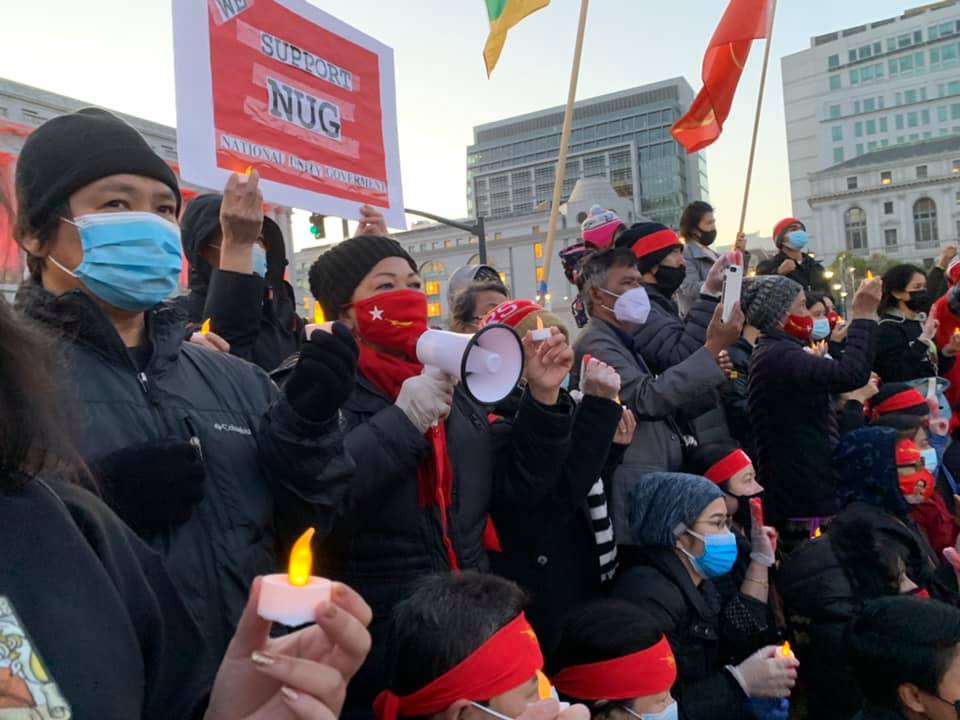 When Ko Ko Lay has managed to speak to his 86-year-old mother living in Myanmar under a military regime, she has told him she cannot sleep through the night. Like many civilians, she fears armed nighttime raids.

On Feb. 1, after a democratic election, Myanmar military forces seized control of the government and declared a year-long state of emergency. Civilians have been protesting that takeover, and the military has responded with deadly use of force, killing hundreds, including at least 40 children. Organizations like Free Burma Action Committee, which Lay co-founded, have been holding demonstrations in solidarity in San Francisco. He and Jane Pak, an adjunct professor at the University of San Francisco and Lay’s colleague on the board of the local aid nonprofit Refugee and Immigrant Transitions, joined “Civic” to talk about the coup’s effects in Myanmar and the Bay Area. Lay refers to the nation by its previous name, Burma.

“We are so upset about what’s happening in Burma,” Lay said. “More than 10 people a day are paying the highest price for freedom and justice and democracy.”

As of April 11, NPR reported, more than 700 civilians had been killed in Myanmar.

Lay was a student leader in the 1988 demonstrations known as the 8888 Uprising, included a general strike and weeks of protest that were met with a violent military crackdown. For him, the Feb. 1 coup is a repetition of a bloody cycle he has witnessed before.

“We do believe that they’re going to do it again, too,” he said.

News of violence breaking out in Myanmar again is taking its toll on people from Myanmar living in the Bay Area.

“These are your neighbors here,” Pak said. “Our bodies, our minds, and our efforts are here. But our hearts and our souls are also in places of origin for those who have migrated here. And we can’t forget that, because by extension, we’re all global neighbors. And I think that’s really important. We live in a global world. We live in a transnational world, we’re not these separated silos anymore. We know that, and COVID has made that abundantly clear.”

Those with loved ones overseas have had to work around internet shutdowns to keep in touch.

“Burmese people heavily rely on Facebook and messenger, but internet is not available all the time,” Lay said. Connections are available only in certain time windows, usually in the mornings.

Many refugees and immigrants from Myanmar in the United States have been unable to return to their home countries for years. Lay is among them. Though he returned to Myanmar once in 2012 at the invitation of the then democratically elected president, during periods of military control, it was too dangerous to return. Other student leaders who had remained in the country after the 8888 Uprising had been sentenced to long prison terms.

“I couldn’t go back to pay my last respects,” he said.

Part of the reason he is organizing demonstrations to bring attention to the ongoing violence in Myanmar,is to spare future emigrants that same isolation.

“I don’t want it to happen again in new generation,” he said. “That is why we are working hard to help the new generation who want to stop this cruel military coup in Burma.”