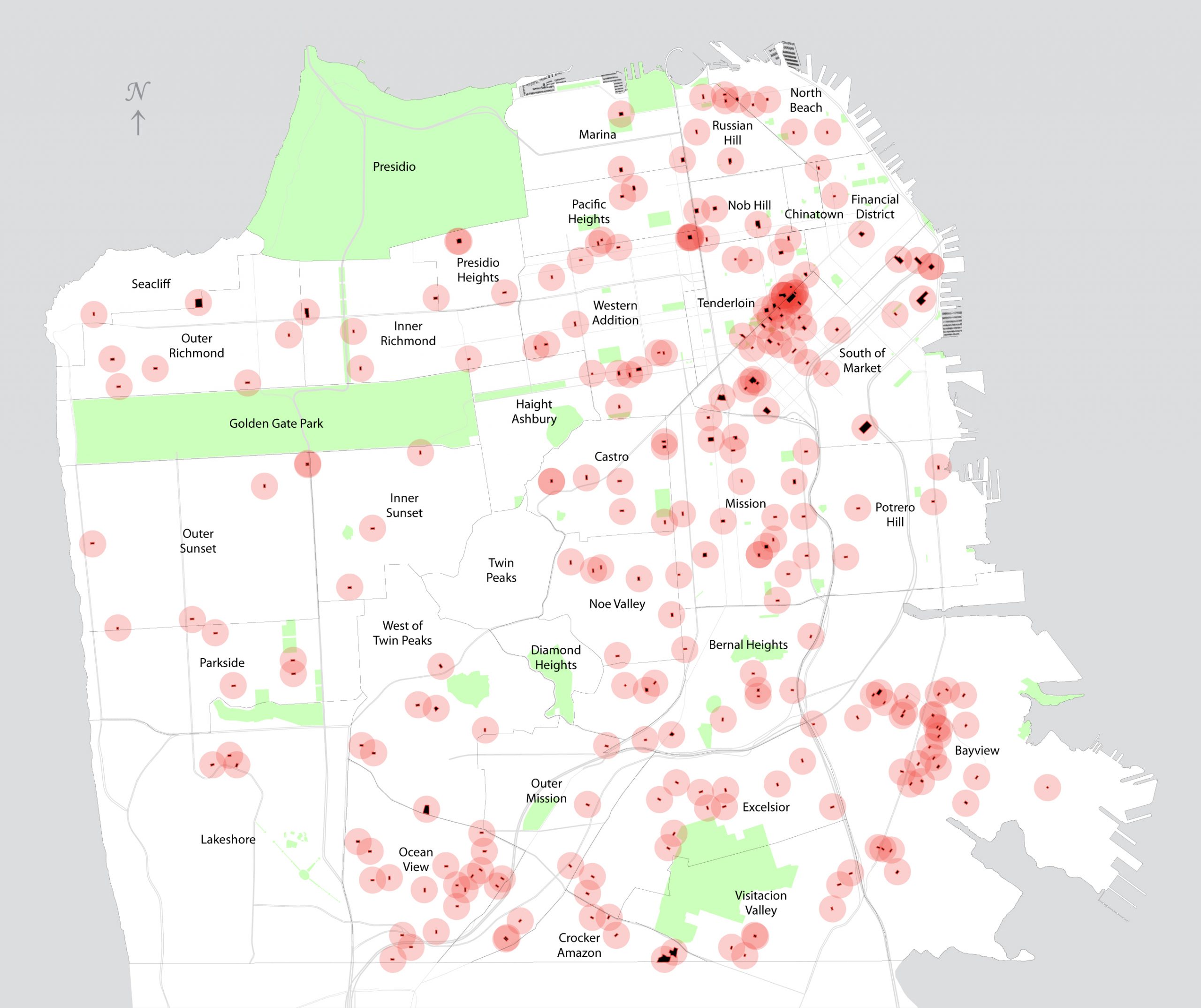 What makes blight? The San Francisco vacant and abandoned buildings targets blighted properties. A building is blighted when the property owner fails to actively maintain and manage it. Blighted buildings are described under the ordinance as boarded buildings, substandard or unkempt properties, long-term vacancies that retard their appreciation, lower property values and discourage economic development. Also, properties are blighted if they are overgrown with weeds, used as a dumping ground for debris or hazardous substances, properties that attract vagrants and gang members. Also included are properties that are deteriorated enough that the building must be demolished or neighboring people and properties could be endangered. In addition to the 2009 law, the city has another anti-blight ordinance on the books. In 2008, the Board of Supervisors approved legislation that gives the Department of Public Works the authority to designate properties as blighted and mandate that property owners make needed repairs. Under this law, public works staff can fine property owners $250 for each violation. Graphic by Shawn Allen, Stamen Design.

More than half a year after the Department of Building Inspection launched an ambitious effort to catalog unused and blighted properties in the city — a process that ultimately could bring in millions of dollars in property and transfer taxes and developer fees — the effort has been hobbled by layoffs in the department.

The Board of Supervisors passed an anti-blight law unanimously in November 2009. It requires property owners whose buildings are vacant or abandoned to register them with the city and fix up their dilapidated exteriors. The law is intended to reduce crime, clean up neighborhood blight and stimulate economic and social activity.

Building inspectors are still trying to figure out how to validate the city’s stock of vacant and abandoned buildings, and it is increasingly difficult, they say, because this is the first time San Francisco has attempted this feat. Inspectors must investigate each property to determine the validity of the blight complaint, the majority of which come from citizens — though some result from fire and police officials responding to crime or a fire in one of the empty buildings.

“Everything fell off the cliffs last October in terms of meeting our budget,” said William Strawn, a spokesman for the building inspection department. “We shrunk to about 230 employees from 300 last year, so we don’t have enough code enforcement to vigorously pursue every reported situation.

“I think the bottom line is that until this ordinance, we had not acquired reliable vacant-building data,” Strawn said. “Even when I spoke to district police and fire stations in an attempt to obtain verified vacant building addresses, none of them kept such data.”

The list of abandoned and vacant properties continues to grow. Although some properties have been removed because the complaint turned out to be bogus, the number grew to 314 buildings in June from 214 in February.

So far, the estimated assessed value of the city’s vacant and abandoned property and land has exceeded $341 million, though that number is low because the actual number of blighted properties could eventually exceed 500, according to building inspectors, and because of Proposition 13.

Under Prop. 13, property tax rates can only increase 2 percent per year, and in San Francisco, the rate is slightly lower than that, at 1.159 percent. And buildings are not reassessed unless they are sold or major improvements are made.

“Those values are probably understated even versus today’s depressed real estate market,” said Ben Rosenfield, the city’s controller, responsible for reports on San Francisco’s fiscal condition. “The actual value of the property is probably significantly higher.”

In neighboring cities such as Oakland and San Jose, there are laws that attempt to track and clean up blight. In Oakland, the city pays for some privately owned properties to be cleaned up to help minimize blight. In San Jose, the Code Enforcement Division tracks blighted buildings and residents can report a property they think is blighted on the city’s website.

Three complaints, most recently May 18, have been filed with the city’s Department of Building Inspection about the old Pagoda Palace Theater — the gutted five-story building that is completely engulfed in plywood on the corner of Powell and Union streets in North Beach.

The Planning Commission approved a plan in January 2009 to redevelop the old theater that is most famous, perhaps, for showing kung fu movies in the 1980s. Having been closed since 1994, the new plans call for 18 units of new housing with ground floor retail and 27 off-street
parking spaces.

The developer, Joel Campos, who owns a chain of La Corneta Taquerias in the Bay Area, is awaiting approval for a $10 million business loan before he can begin renovation.

“It’s very hard,” Campos said. “The banks are asking for a lot of requirements to get the loan and I’m a smallbusiness man, but I’ll keep trying.”

Campos also needs to secure additional building permits in order to begin construction, according to Tim Frye, the North Beach historic preservation specialist for the San Francisco Planning Department. San Franciscans are calling building inspectors about rundown buildings in neighborhoods across the entire city from Pacific Heights and North Beach to the Mission and Hunters Point.

Brett Howard is the building inspector who responded to the citizen complaints about the old Pagoda Theater. He called the gargantuan shell of a building a health threat and an eyesore.

“The upper part is exposed to the elements and pigeons and the exterior of the building is all tagged up,” Howard said. “The whole thing is falling into disrepair.”

On a scale of one to 10, Howard rated the building a five of the worst he’s seen while inspecting the city’s blighted buildings.

In the past, said Ed Sweeney, deputy director of the Department of Building Inspection, his staff would “wing it” because there were no laws on the books to track these empty or blighted buildings.