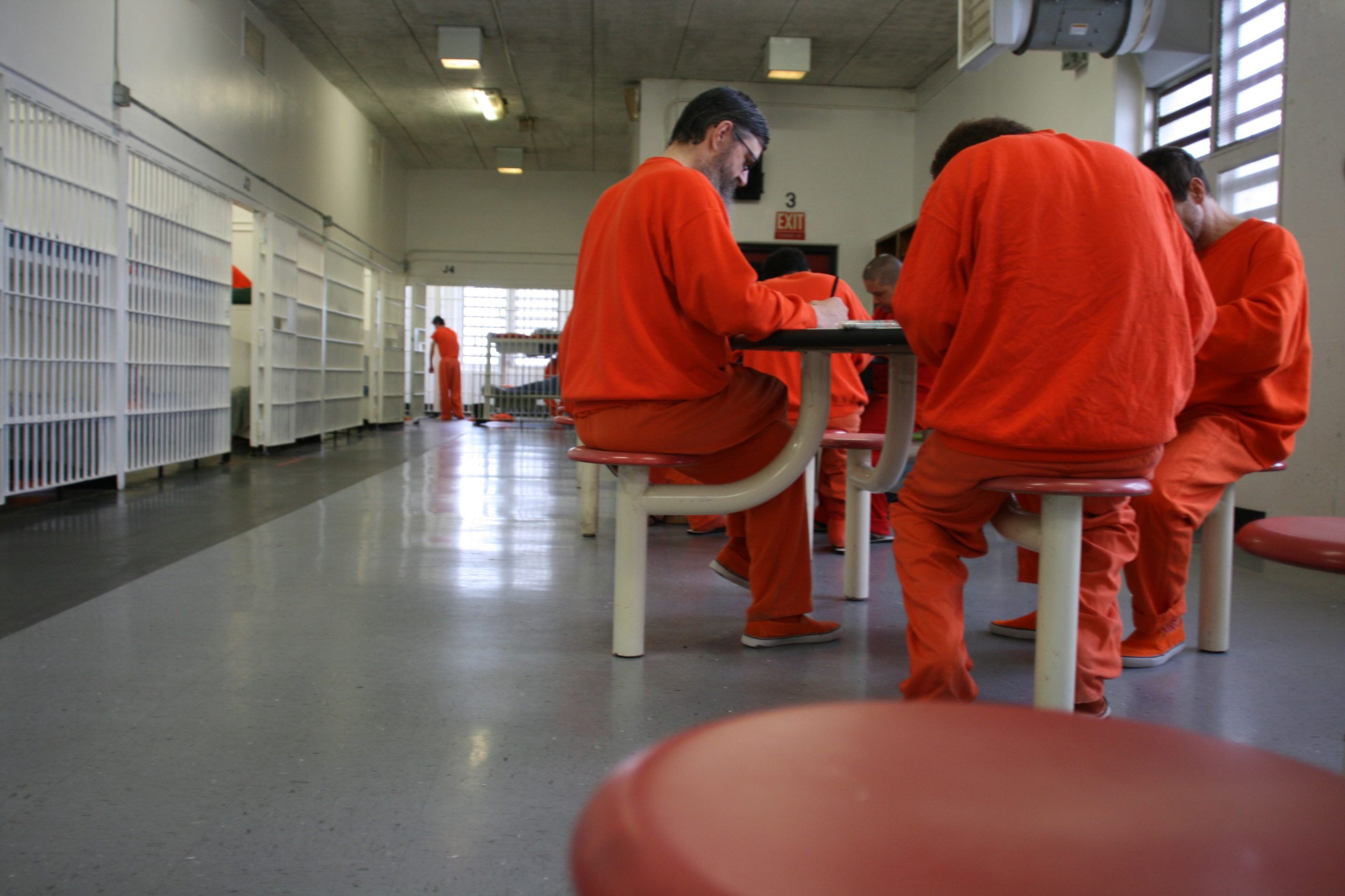 When the city jail at 850 Bryant St. is torn down, the replacement building will have an updated psychiatric unit. Photo by Anna Vignet / San Francisco Public Press.

While the overall inmate population in San Francisco is declining, the percentage of inmates with serious mental health problems — schizophrenia, bipolar disorder and schizoaffective disorder and others — has climbed.

From 2004 to 2013, Sheriff Ross Mirkarimi says, the time psychiatric staff has had to spend with inmates nearly doubled. Evaluations, medication planning, therapy, discharge planning and case management — what the jails call units of service — soared from 40,000 to 72,000 over a decade.

In February, when Mayor Ed Lee convened a task force of mental health leaders to generate ideas for treating the drug-addicted and mentally ill homeless population, Mirkarimi showed up uninvited. He said the city has failed to appreciate that the jails have become, “the largest mental hospital in the city.”

The San Francisco Public Press sat down with Mirkarimi twice to talk about how the jails are dealing with a more seriously ill inmate population. What follows is a selection of his responses.

Q: You said the city has not yet recognized the burden the jails are carrying. What’s going on?

Sheriff Ross Mirkarimi: What’s called for is a master plan. The municipal criminal justice leaders have been focusing on recidivism. They’re doing much better. The homeless are cited and released quickly. But they don’t have a handle on the mentally ill population. Our jails should not be a substitute for mental health treatment. Absent a comprehensive citywide plan, the knee-jerk response is to criminalize mental illness.

Q: Is the mayor paying attention to these issues?

A: It was a mistake that he just blessed the new San Francisco General Hospital without new psychiatric units. Any time a new hospital is built, it should have to provide psych beds. We have the new California Pacific Medical Center that has no psych beds. I met with the mayor’s staff. This should be a very top priority of the city. I know we can do better.

We’ve got Mobile Assistance Patrol. You can call 311 and they’ll send out the MAP — which is a lousy, hit-and-miss approach to dealing with mentally ill homeless. We must be looking for a permanent solution. There needs to be more of a continuum of care.

Q: Some inmates with mental illnesses were homeless before their arrest, sleeping in stairwells, storefronts, elevators and under cardboard. At San Bruno Jail, they sleep indoors, eat regular meals, learn yoga, participate in recovery programs, engage therapy and get medication.

A: Our jail psychiatric services are hands-on. San Francisco is renowned for its psychiatric therapy and medication therapy. We’re the first county jail system in the country to be qualified to sign up people under Obamacare. And the reason for doing that is 80 percent of the people who leave our custody have no health insurance, or access or resources to health insurance.

Q: What’s the difference between the main city jail at 850 Bryant St., which will be replaced with a seismically secure facility, and the city’s other jail in San Bruno?

A: 850 Bryant is a stark, inhumane, deplorable building. When I came into office, the proposal was to replace it with 903 beds, and I said that that’s unnecessary, far too big. And so, the plan was replaced with 640 beds. It will be a facility unlike any facility, in downtown San Francisco. It’s about accommodating a smaller population with a more humane detention facility, with a lot more emphasis on re-entry and rehabilitation programming.

Q: The governor talks about the need for mental health services and doing it through realignment — moving inmates from state to local responsibility. That hasn’t translated into dollars?

A: It hasn’t translated. I met with the governor about this very issue with some of the other elected sheriffs from around the state. I asked him point-blank: What is after realignment? We want to understand what is going to be his priority in this next term.

Q: Is there an alternative funding source?

A: We appealed to the mayor and the Board of Supervisors to go in this direction, and that just did not happen. One thing we want to do is go beyond what I think is the insufficient training that is required by the state of our deputy sheriffs, who work the jails and attend to post-release populations with mental illness, by instituting Critical Incident Training. I want to make it mandatory.

Q: Do you work with other city agencies?

A: The Department of Public Health, San Francisco General Hospital and Jail Psychiatric Services link up with Healthright360. We have a very focused intake and scripted regimen for somebody who’s suffering from mental illness for while they’re in our custody, and discharge planning for when they’re about to be released.

I really think we need to up our game in preparing them for release. And that is really the overarching strategy that I’m trying to institute here.

Rebecca Rosen Lum is a veteran journalist and educator. She is president of the Pacific Media Workers Guild, where she co-founded its flagship freelance unit. She was nominated for a Pulitzer Prize while at the Contra Costa Times. Her series on the financial abuse of elders resulted in changes to California state law, and her reporting on conditions at residential hotels led to criminal charges and the closure of a facility. She recently contributed to a series on prison realignment.