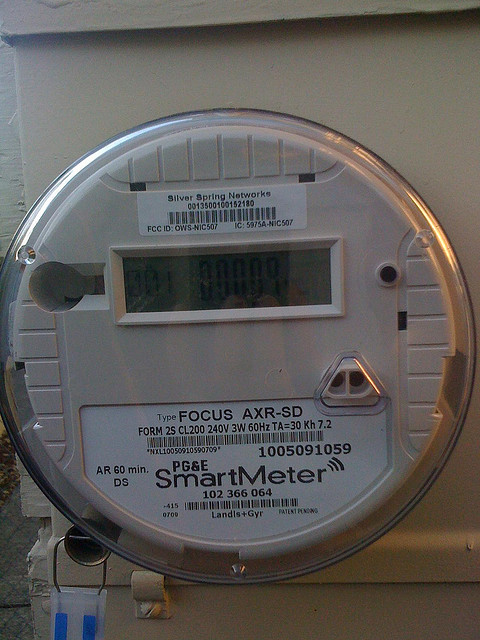 PG&E is rolling out smart meters, but you can ask them to skip your house. Creative commons photo by Flickr user jnichols959.

Alison Hawkes, Online editor of BayNature.org/Freelance writer |
LikeTweet EmailPrint More
PG&E has proposed charging residential customers to opt out of having wireless transmission of electric meters turned off at their homes.
The proposal announced Thursday would allow the utility to recoup the expenses it says are associated with running an opt-out program by charging participating customers. The utility has come up with a rate program with one-time charges of either $135 or $270, plus either monthly fixed charges or a surcharge on hourly rates for gas and electric.
Opponents of the wireless devices objected to the fees and instead called for an outright moratorium on Smart Meters. They previously requested that they have the option to opt-out, citing perceived health impacts from the electromagnetic radiation emanating from the pulsating meters. But PG&E’s proposal offered little consolation.
“It’s extortion,” said Sandi Maurer, founder of the Sebastapol-based EMF Safety Network. “It’s discrimination, as well, against poor people. They can’t afford the opt-out so they have to be exposed. It’s discrimination against sick people and the uneducated.”
PG&E maintains that the wireless devices are safe, and the radio technology common to a number of household devices, including cellphones, microwave ovens, baby monitors, and garage door openers.
In the opt-out program the utility would deactivate the wireless transmitter to the Smart Meter and regularly send out a meter reader to record electrical use, much like it has done in the past with analog technology.
In addition to the start-up and monthly fees, the utility also proposed an “exit charge” for leaving the opt-out program but did not specify the amount. PG&E proposed a 20 percent  lower fee structure for income-qualified households in the CARE program. And to move a Smart Meter from an existing location to another, say further from a home, would cost between $2,500 to $4,500 for above ground meters, and between $6,000 to $11,000 for underground meters, according to the proposal.
PG&E says the fees would cover personnel costs as well as costs associated with modifying the wireless meters to a manual system, and  ”to compensate for any network degradation resulting from turning the radios off.”   It expects 145,800 customers to chose the”radio-off” option.
The utility reported that it had installed 7.7 million gas and electric Smart Meters as of March 1 as part of a sweeping program to streamline operations and improve efficiency in the electrical grid. The Smart Meters are a key part of implementing this so-called smart grid.
“We are building a smart grid and part of that is building two-way digital Smart Meters,” said PG&E spokesman Greg Snapper. “If you now introduce something that was never engineered to work that way, you have to modify the way things work.”
Snapper said there is a cost associated with modifying the program to accommodate opt-out customers and that it would not, under the proposal, be “socalized to the rest of customers.”
The California Public Utilities Commission ordered PG&E to come up with an alternative to mandatory Smart Meters as pressure mounted from opposition groups throughout Northern California. More than 30 towns have banned Smart Meters in the last year, although their decisions carry questionable legal standing. Meanwhile, commission meetings in recent months have become a forum for anti-Smart Meter protests.
Still, Smart Meters remain a debatable topic within the environmental community. Environmental Defense Fund attorney Lauren Sommer said she supports PG&E’s move to allow customers to opt-out of the program, but hopes they choose to keep the devices turned on.
“We understand customers have heard a lot about potential risks, but study after study shows radio frequencies pose no human health risk,” Sommer said. “On the other hand, burning fossil fuels has long been known to generate a lot of pollution and has long been known to be a public health threat.”
Sommer said Smart Meters connected to a smart grid will enable the utility to create a more efficient electrical system that makes use of more renewable energy. In the long run that means syncing appliances via wireless transmissions to run during off-peak hours. More immediately, customers will be able to see in how much energy they’re using and how much more it costs at peak times of the day, prompting them to conserve.
“The dirtiest fossil fuel plants are the ones brought on during peak times,” Sommer said. “In California that’s 4-6 in the afternoon in the summer.”
PG&E says it’s allowing customers with Smart Meters to sign up for a notification that alerts them when they’re entering a higher electrical tier by email, SMS, or voicemail. Additionally, those customers can view hourly electrical use and daily gas usage, says Snapper.
Such potential benefits are little consolation to Smart Meter opponents who believe the technology poses real health risks ranging from dizziness to cancer.
“[PG&E is] responsible for providing safe, affordable, and reliable electrical service and we should not have to pay to make it safe,” said Maurer.
California PUC President Michael Peevey said it will hold a hearing on the PG&E proposal before making a decision whether to approve it or not.
Below are the details of PG&E’s opt-out pricing structure that residents can choose: