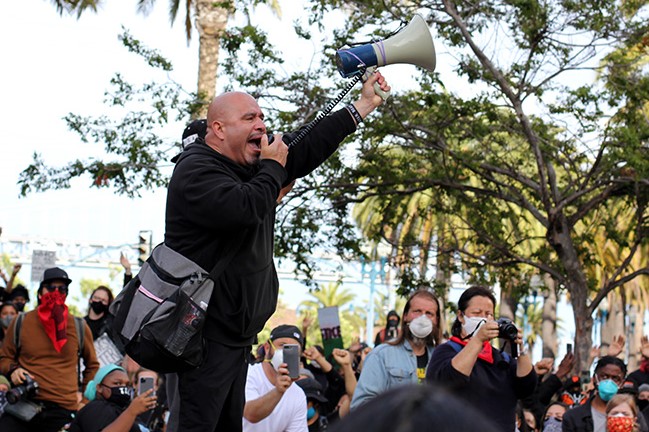 On Sunday in San Francisco, local organizer Oscar Salinas addressed the throngs of people who had shown up in protest over the killing of George Floyd — the latest instance of white officer taking the life of an African American man. Photo by Laura Wenus / San Francisco Public Press

Noah Arroyo, Assistant Editor |
LikeTweet EmailPrint More
The past week has seen a nation pushed near its breaking point. Political demonstrations and unrest have gripped cities across the U.S. — and in other countries — in protest over the police killing of George Floyd in Minneapolis. It was just the latest instance of a white officer taking the life of an African American man.

The frustration took hold in San Francisco this weekend. Following peaceful demonstrations on Saturday, looting and vandalism that evening spurred Mayor London Breed to declare an 8 p.m. curfew and warn of calling in the National Guard.

The next day, thousands of people marched in solidarity along Market Street, ultimately converging at City Hall. There they met law enforcement officers, who later arrested a small group of people who remained after curfew. San Francisco Public Press reporters were in the thick of it, documenting Sunday’s events on Twitter right up to the moment the bus full of detainees departed for the county jail.

In the late afternoon, a protest that began at City Hall migrated onto Market Street. Marchers made their way to the Embarcadero. The marchers turned onto Bryant Street, heading east. They looked ready to enter the I-80 freeway onramp but encountered a line of law enforcement officers. Blocked, they continued toward the Ferry Building. At Embarcadero Plaza, speakers addressed the crowd, saying that this political moment required a clear strategy and a unified focus on justice.

Several people said they were tired of the injustice of police killings, and of having to demonstrate against them over and over again. The crowd offered a moment of silence in honor of George Floyd. The mass of protesters then remobilized and made their way back to City Hall as evening started to set in. They were joined by protesters coming from at least one other demonstration — in front of the Hall of Justice at 850 Bryant Street. People spoke with Public Press reporters and told the stories of what brought them there. Sheriff’s officers stood on the steps of City Hall, behind barricades barring entry to the building. They carried tear gas guns, pepper spray and zip ties, and watched solemnly as the people raised their hands in unison and shouted: “Hands Up! Don’t shoot!”

The crowd was invoking the iconic call that demonstrators began using in 2014 to protest the killing of Michael Brown.

Then the attendees all knelt, and urged the officers to “take a knee.” The officers did not. One of the marchers, who said her name was Charmaine N., took the bullhorn and addressed the crowd:

She urged them to take to the streets again later in the week. As the 8 p.m. curfew approached, most of the crowd dispersed and left. Some people, like Takia Morgan, remained. Stragglers became increasingly confrontational with officers, who advanced on them and warned that they would be arrested if they did not leave. Some protesters attempted to light a dumpster on fire, but after a few flares, the flames quickly died out. Protesters may have differing viewpoints about property damage, but share the belief that racial injustice must be addressed.

“This is somebody’s life, somebody’s child,” said Kathy Mills, who lives in an apartment nearby. “We have tried peaceful movements — it hasn’t worked. If you need to tear it up, tear it up.” Police began to make arrests as those outside the cordon looked on. At the end of the evening, police loaded arrestees on a bus headed to the county jail.