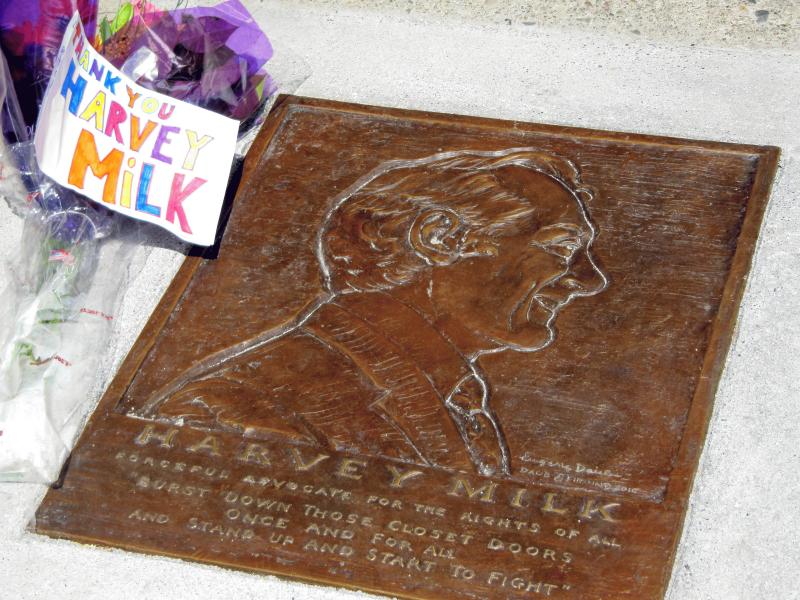 San Francisco dedicated a new Castro Street plaque to Harvey Milk on the state’s first official Harvey Milk Day, which would have been his 80th birthday. Photo by Matej Praprotnik.

About 200 people gathered on Castro Street Saturday for the dedication of a plaque honoring slain San Francisco Supervisor Harvey Milk, the first openly gay politician in California, on the state’s first official Harvey Milk Day, which would have been his 80th birthday.

Supervisor Bevan Dufty led the unveiling ceremony at 575 Castro St. in front of the former Castro Camera, which Milk owned with Scott Smith. As Milk emerged as a vocal gay rights advocate, the shop became an epicenter of neighborhood activism and the hub for Milk’s political campaigns.

A bronze plaque set in the sidewalk in front of the store features Milk’s profile in bas relief with the words “Harvey Milk/ Forceful advocate for the rights of all/ ‘Burst down those closet doors/ once and for all/ and stand up and start to fight.’”

Dufty was joined for the dedication on a sunny, windy afternoon by Assemblyman Tom Ammiano; Milk’s friends and key members of his political campaign Daniel Nicoletta, Cleve Jones and Anne Kronenberg; current Supervisor David Campos; and Natalie Jones, a seventh grader who last year was backed by the ACLU when her school in Ramona (San Diego County) tried to prevent her from presenting a report she had prepared on Harvey Milk for a homework assignment.

Ammiano made the crowd laugh by conjuring Milk in the current political landscape.

“Could you imagine Harvey Milk meeting Sarah Palin? Hate your politics, love your shoes,” he said.

Jones said he was happy to join the celebration: “I’m glad to be here to see Harvey being remembered,” Jones said. He added that among all the tributes to Milk’s life, including the Academy Award-winning movie “Milk,” “I have the feeling that the one that would mean the most to him is that school,” referring to a nearby Harvey Milk Civil Rights Academy.

Kronenberg, who was campaign manager when Milk won his supervisor seat, recalled her first day in the camera shop and Milk’s vibrant personality.

“Harvey said to me, ‘I yell a lot, and the only way you’re going to make it here is to yell back,’ and I learned to yell back,” she said.

Campos said that Milk spoke out not only for gay rights but for all disenfranchised people, noting the anti-immigrant legislation recently passed in Arizona, and a current proposal to outlaw sitting or lying on public sidewalks in San Francisco — similar to legislation Milk fought in the 1970s.

“Harvey Milk fought against that law because it was targeting people,” he said.

Campos said Milk represents a “call to action” and is pleased that Milk’s memory is being broadly considered in those terms.

“Harvey is now becoming slowly part of the mainstream,” he said. “There was really very little about him that was mainstream.”

“There’s something really special coming into City Hall and seeing that bust of Harvey Milk in front of the chamber of the Board of Supervisors,” Campos said.

As the plaque was unveiled, the crowd cheered and the San Francisco Lesbian/Gay Freedom Band began playing “San Francisco.” A group of young men in the apartment above the former camera shop reached their arms through open windows and dropped handfuls of large, brightly colored confetti onto the crowd. A strong breeze carried the rainbow leaves toward 18th Street.