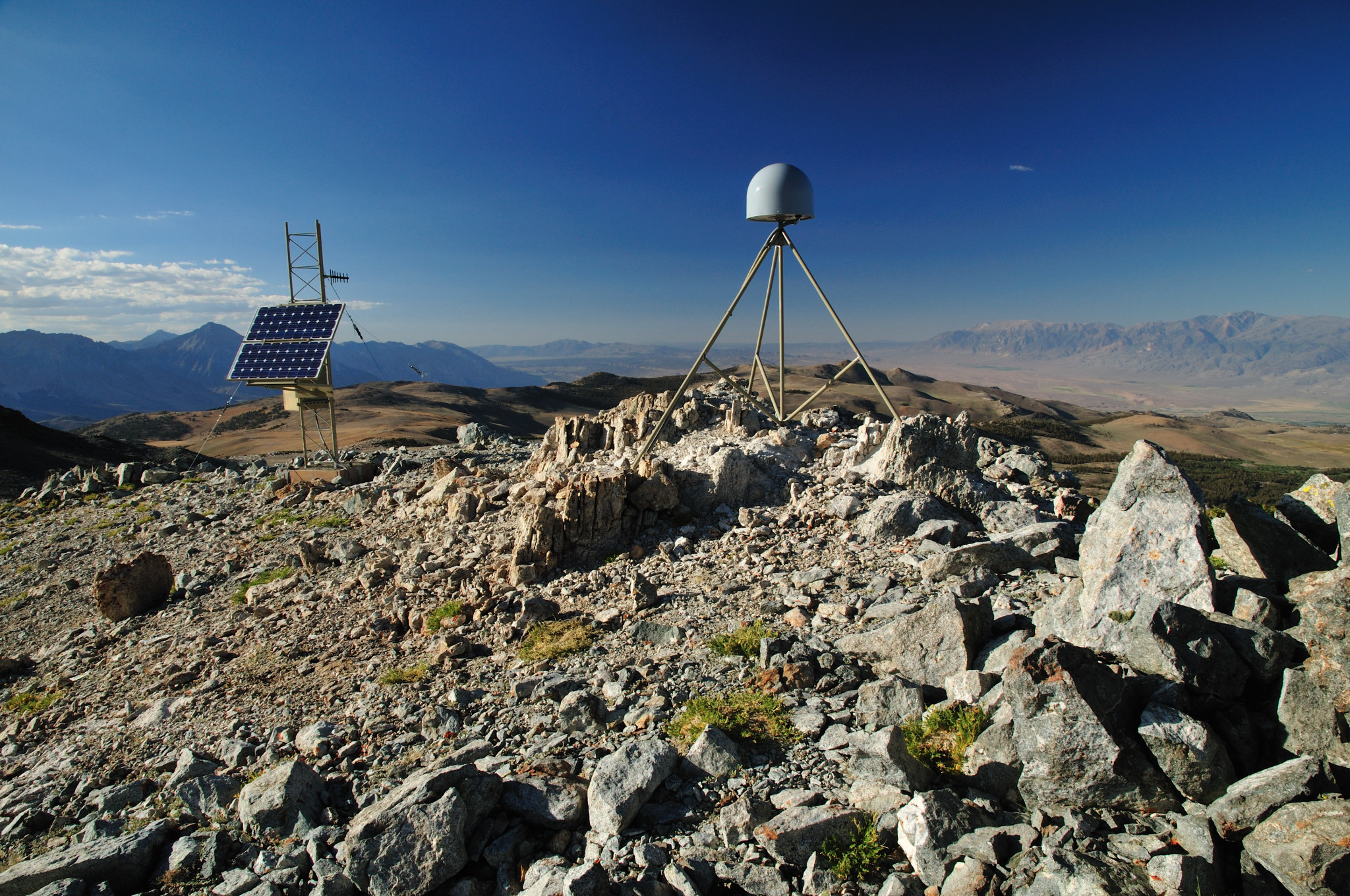 In a newly published scientific paper, researchers attributed modest uplift in areas of the Sierra Nevada and Coast Ranges across central California to human-caused groundwater depletion in the adjacent San Joaquin Valley. GPS stations such as this one, P311 in the eastern Sierra Nevada, are administered by the EarthScope Plate Boundary Observatory. Photo courtesy of UNAVCO

Depletion of groundwater in the San Joaquin Valley is having wide-ranging effects not just on the agricultural industry and the environment, but also on the very earth beneath our feet. Massive changes in groundwater levels in the southern Central Valley are changing the stresses on the San Andreas Fault, according to research published today.

Researchers have known for some time that human activity can be linked to localized seismic effects. In particular, much of the debate about fracking in California in the past few years has centered on evidence that the process of injecting large volumes of liquid underground can lubricate fault lines and increase local earthquake risk.

Now geophysicists in Washington, California and Nevada have gathered evidence that human activity can have much farther-reaching seismic consequences.

This research was spurred by the observation that the southern Sierra Nevadas and the Coastal Ranges are rising by 1 to 3 millimeters a year. Geologists have been observing this movement, which they call uplift, using a network of GPS sensors planted along these mountain ranges. They’ve batted around theories about why it might be happening, with no clear answer.

“It looks like there’s a big bullseye of uplift in the mountains surrounding the south Central Valley,” said Colin Amos, a geologist at Western Washington University in Bellingham.

Ten years of satellite data show that groundwater use in the Central Valley is outpacing its replenishment, a trend that is intensifying in the current drought. Amos wondered if the two things might be connected. “What if uplift in the mountains is a response to sucking water out of the ground?” Amos said.

Amos and his collaborators found something that goes deeper than that — something that could look to a paranoid environmentalist like a grand unified theory of California problems: drought, water use, and earthquake risk. “We found a link between what humans are doing on the ground and the rate of earthquakes,” Amos said. His data and model are published today in the international scientific journal Nature.

There are trends on two timescales. First, there’s a seasonal one. In the late summer and early fall, it rains less and people use more water. During this time, Amos’s group discovered, there is a corresponding peak in the height of the Coastal Ranges and the Sierra Nevada. There is also a long-term trend: Over time, as the groundwater is being depleted, these mountains are growing taller.

To picture how water can play a role in this, think of the Earth’s surface like a flexible sheet of plywood with a weight on it. “The upper portion of the earth is elastic, and the ground water is weighing it down like a brick,” Amos said. Removing groundwater is like lifting that brick. The earth’s crust literally flexes up. As it moves up, it pushes up the Sierra Nevadas and the Coastal Ranges.

The researchers also looked at how this movement might stress the San Andreas Fault, which runs parallel to the San Joaquin Valley. The San Andreas Fault runs roughly the length of the state, stretching from the Palm Desert in the south, up through San Francisco, and north nearly to Eureka. It marks where two of the Earth’s tectonic plates meet. Friction and stress are currently holding the plates locked in place.

When the balance shifts and the faults slip, it leads to tremendous earthquakes, including the 1906 San Francisco earthquake. And even decades after the smaller but still deadly Loma Prieta quake of 1989, Bay Area cities are still grappling with the need to brace billions of dollars worth of vulnerable infrastructure against the Big One. (Read more on San Francisco’s retrofitting efforts at sfpublicpress.org/earthquakes.)

Last year, researchers at the U.S. Geological Survey estimated a 28 percent chance that an earthquake of at least magnitude-6.7 would hit the Bay Area within 10 years. But the ground could shift at any time, and the risk increases the longer the pressure builds in a fault.

If massive changes in groundwater are big enough to move mountains, might they also change stresses on the fault? Amos has calculated that yes, they can. Again looking at short-term and long-term trends, the researchers found that patterns of seasonal microseismicity — rashes of tiny earthquakes — track with yearly changes in water use.

And they suggest a major long-term change: destabilization of the San Andreas fault over time.

“Long-term withdrawal of water in the San Joaquin Valley is leading to a decrease of stress on the San Andreas fault, and this promotes earthquakes,” said Paul Lundgren, a geophysicist at the NASA Jet Propulsion Laboratory in Pasadena. Lundgren is familiar with the research but is not associated with the project.

Andrew Michael, a geophysicist at the United States Geological Survey in Menlo Park, who was also not involved with Amos’s research but has read the results, said that for now it gives scientists a fuller picture of how faults like the San Andreas work. But it is not that useful for predicting earthquake risk in the short term, he said.

This linkage between water and seismic effects is not a new idea, nor is it unique to California. In 2001 and 2003, researchers led by Kosuke Heki at Hokkaido University in Japan showed that variations in snow loads in that country’s mountains tracked with variations in seismic activity.

What is unique in the current research is the link to human activity. California’s groundwater depletion is certainly tied to the drought. But it is also driven by the state’s thirst for drinking water and irrigation, said James Famiglietti, an earth systems scientist at the University of California, Irvine.

Famiglietti directs the University of California Center for Hydrologic Modeling. The center now has about 10 years’ worth of detailed satellite data tracking groundwater depletion in California. From October 2003 to March 2010, the Sacramento and San Joaquin River basins lost nearly 31 cubic kilometers of fresh water. That’s almost the volume of Lake Mead. The latest data show that since the start of the current drought, the decline in groundwater storage has sharpened. From November 2011 through November 2013 alone, an additional 20 cubic kilometers have been depleted. And that does not yet include this year’s record-dry winter. (The center’s latest water advisory, from February, is available in a PDF.)

Geologists’ working assumption is that human activity is too insignificant to play any role in whether large quakes happen. But the new model shows that may not be true, Lundgren said.

That is not to say that this research can give us any fine-grained predictions about when the next big one will be. “Right now we’re considered overdue for an earthquake, but the statistics aren’t good enough that we have a clock,” he said. The time between major earthquakes, he explained, is like time spent going up an escalator where the top is not visible. What the new groundwater model shows, Lundgren said, is that human factors have put us another step or two closer to the next big quake.

For more on local earthquake safety measures, see “BRACING FOR THE BIG ONE,” a special report in the Winter 2013 print edition of the San Francisco Public Press, which showed how thousands of homes remained vulnerable to earthquakes due to of delays in mandatory retrofitting for problematic “soft-story” buildings.

Katherine Bourzac, a freelance journalist based in San Francisco, writes about materials science, nanotechnology, energy, computing, medicine, and physics. After almost a decade as a science journalist, her favorite nanomaterial is carbon nanotubes and her favorite quasiparticle is the plasmon. If you don’t have favorites of your own yet, you should read some of her work in Technology Review, Nature, Chemical and Engineering News, and elsewhere.