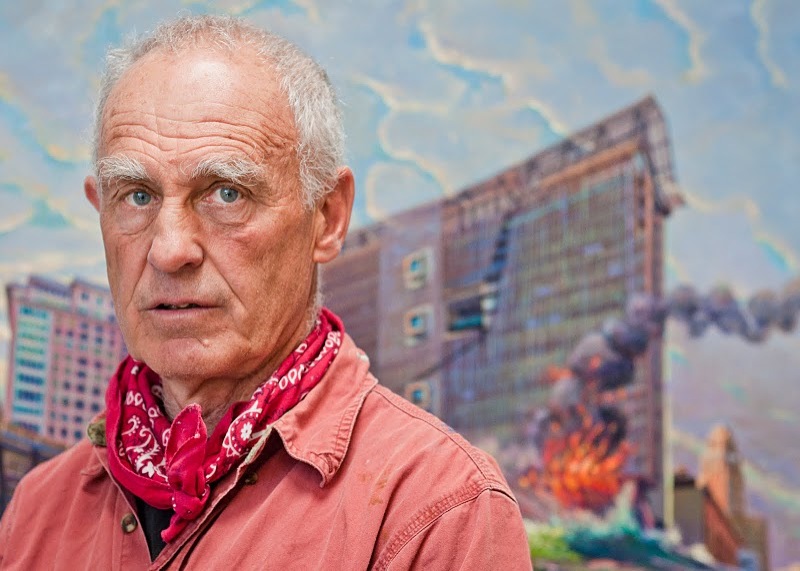 RADIO DOCUMENTARY/SLIDESHOW: Artist Anthony Holdsworth, who painted a series of urban landscapes that depicted a future San Francisco flooded by rising seas, was invited to show his work last year inside the new “green” San Francisco Federal Building at Seventh and Mission streets.

But before the opening reception, the show was ordered taken down. He said the image in one of his paintings, of oil burning on a flooded sidewalk in front of the building was too similar to the news footage of the BP oil spill in the Gulf of Mexico for federal authorities to bear.

Undeterred, Holdsworth is mounting a new art show — and he’s doubling down on the climate change theme. He is painting pictures of buildings that would be familiar to anyone who has walked the streets of San Francisco and Oakland, and imagining what those streetscapes would look like after sea levels rise and the cities are abandoned.

Listen to Anthony tell us his story while he paints this very picture and as he is interrupted by all manner of friendly folks on the street:

In this radio documentary, “The Censored Climate Change Streetscapes of Anthony Holdsworth,” first aired on KPFA Radio in Berkeley, Eric Klein spent a morning with Holdsworth as he worked on one big oil painting, on the sidewalk in downtown San Francisco, as well as a in his studios in West Oakland.

Eric Klein works at KPFA Radio in Berkeley. He podcasts at www.crowsnestradio.com.

Justin Beck is a journalism lecturer at San Francisco State University, a media consultant and photographer. He previously worked for the San Francisco Chronicle as a multimedia producer, the National Radio Project as a reporter, host and producer, and as a public affairs director and DJ for KDVS-FM in Davis, Calif. His work in radio has been heard on 200 public and community stations around the U.S. His photography has been featured in San Francisco Magazine and on numerous Bay Area blogs, including SFist and Curbed SF.