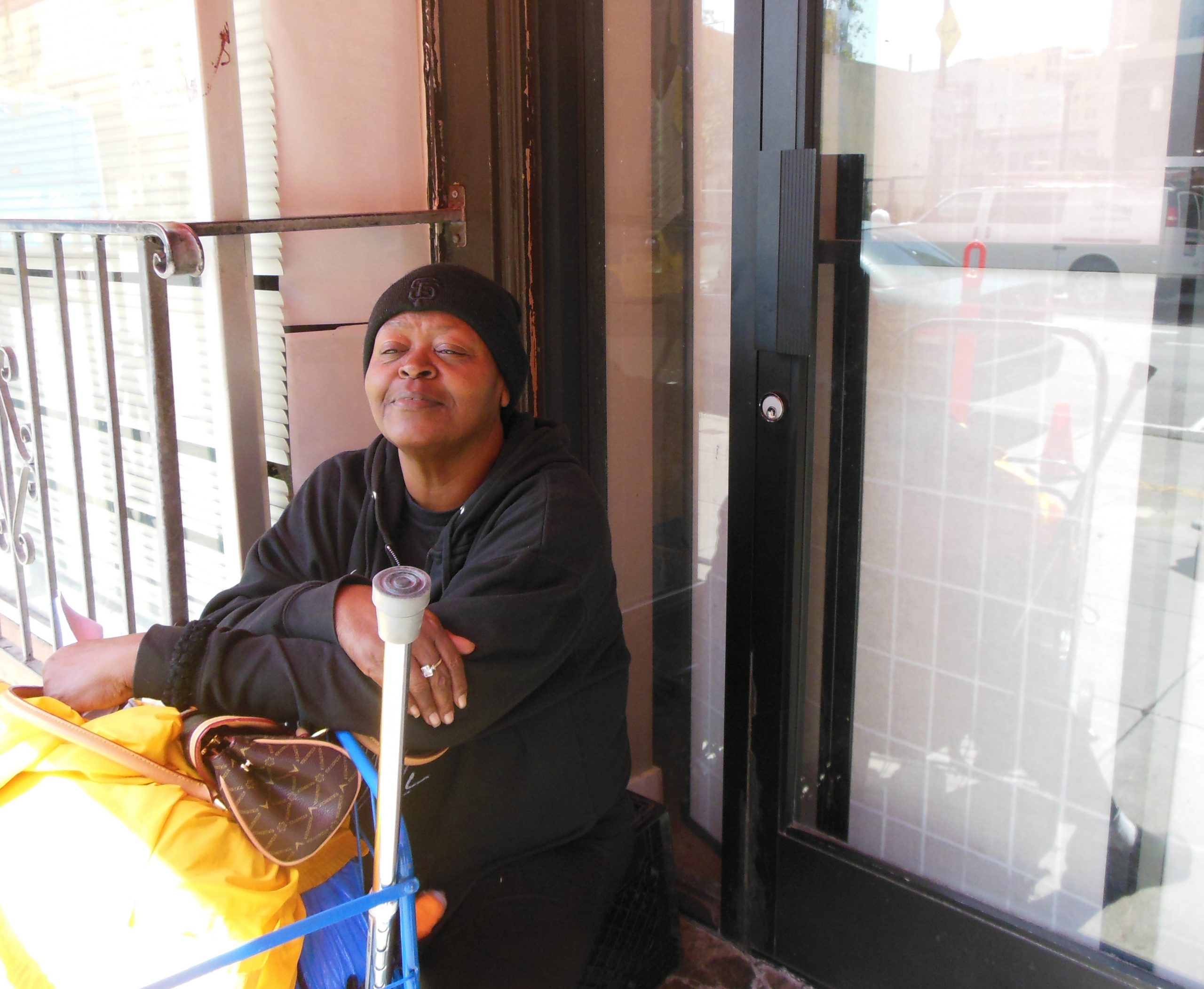 Julia Smith, 64, waits for a chance at a shelter bed at Glide in the Tenderloin. Photo by Paayal Zaveri / San Francisco Public Press.

Julia Smith sat on an overturned crate for five hours outside Glide Memorial Church in the Tenderloin, hoping to reserve a bed in a homeless shelter. She was reeling from the experience just two days earlier of losing a coveted spot in a city-subsidized supportive housing program.

The supervised living space in a residential hotel in SoMa was supposed to be permanent, and represented a route to stability and health. With a history of severe depression, Smith, 64, said the threat of returning to the streets scared her.

“I try to keep a positive attitude,” Smith said. “Living on the street, it takes its toll.”

Tenants in the supportive housing system, especially those who possess debilitating mental or physical handicaps, too often face the threat of eviction, staff and tenants said. Residents in these facilities make up a disproportionately large slice of those who seek legal assistance to fight eviction threats.

The Eviction Defense Collaborative provided this service to 1,913 people last year. Tyler Macmillan, the group’s executive director, said that 389 of them, or 20 percent of the total, were living in supportive housing at the time. By contrast, only about 1 percent of renters citywide live in these residences.

Many supportive housing residents face eviction for nonpayment of rent. Tenants often rely heavily on government assistance, including Social Security disability. To keep the checks coming, they continually meet with a caseworker. But if a tenant misses a meeting, because of a debilitating injury, for example, or a sudden bout of depression, it could mean interruption in payments and loss of housing.

The prevalence of mental illness can make it hard for formerly homeless people to adjust to supportive housing because they often have trouble caring for themselves.

“Many of these people are coming into housing after being homeless for many years and have faced years of trauma,” said Michael Gause, deputy director of the Mental Health Association of San Francisco. “It takes time to get acclimated again to housing.”

Personal disputes often snowball out of control. In the months before her departure, Smith came into increasing conflict with her building’s manager at the Canon Kip Community House, a converted single-room occupancy hotel on Natoma Street in SoMa. Smith said the manager refused to pay to fix her heater, even though it had been broken when she moved in.

When Smith stopped paying rent in response, the manager threatened to evict her. She decided to move out voluntarily, she said, from sheer battle fatigue.

In the aftermath, securing a shelter slot is a tedious endeavor for Smith. With a bad back (she has three fractured vertebrae) and her depression diagnosis, she worried about the consequences if she could no longer make time to see her doctor.

Her goal now is to save money to find a new place to live. The bulk of her income comes from $867 per month in Social Security benefits. To get off the street, she said, “I need more money.”

Overworked staff at supportive housing programs say they face conflicts regularly, often because of inappropriate behaviors that homeless people bring indoors and need to be dealt with.

Some tenants struggle with hoarding and cluttering. Amelia Rudberg, a case manager at the Seneca Hotel on Sixth Street, said managers must evict hoarders to maintain a “standard of habitability” demanded by the Department of Public Health.

Tensions can even turn violent. Samara Miller, a case manager at the Raman Hotel on Howard Street, said she and her colleagues first try to keep problems from becoming physical by informally conversing with tenants who threaten others. If the problem continues, staff makes the tenants agree in writing to desist. Eviction is a last resort.

“We want to keep people housed, we don’t want them to go back onto the street,” Miller said, “The other balance is keeping the community safe as well.”

In April, the Eviction Defense Collaborative proposed altering that dynamic by creating a new, $200,000 city program to mediate disputes between landlords and tenants.

By setting standards for conflict resolution, a mediation service would “dramatically reduce the number of formal evictions,” Macmillan said. That, in turn, could offset the costs of court proceedings for about 400 people.

The Board of Supervisors rejected the proposal as written last spring. But Macmillan is working with District 2 Supervisor Mark Farrell to revise the proposal for another attempt at funding.

To the mentally ill, eviction lawsuits can be especially challenging.

Richard Merriel, 48, spent a month in jail this summer on the charge that he violated his parole. Meanwhile, he racked up $1,400 in unpaid rent at the Mission Hotel on South Van Ness Avenue, one of the Tenderloin Housing Clinic’s city-sponsored supportive housing sites.

When the organization sent him an eviction notice, Merriel did not realize he could seek legal advice, he said. He signed the papers without question.

His oversight might be explained by his medical diagnoses. Merriel said he suffers from paranoid schizophrenia, bipolar disorder and antisocial personality disorder. He also has difficulty reading and writing.

It was his overlapping set of disabling conditions that qualified him for a supportive housing program in the first place.

Merriel, who collects a monthly Social Security check of $961, said he was renting rooms in hotels immediately following his eviction. But by September, his money was running out. His fear was that soon he might have to resume sleeping on the streets.

But with a case manager’s help, he said he was hopeful that he could get into a new room through a supportive housing program at Hotel Isabel on Mission Street in SoMa.

The goal for the city and outside advocates should be to provide enough help for people in supportive housing to remain housed, said Deepa Varma, a staff attorney at the Eviction Defense Collaborative. “Both sides lose if this person becomes homeless.”