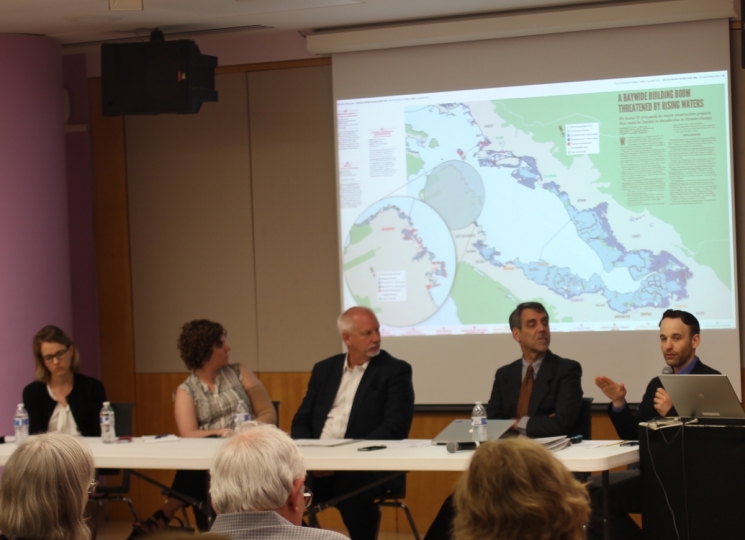 The Bay Area is a long way from being prepared for impending sea level rise.

That was the assessment from experts in City Hall, regional government agencies and environmental groups at a discussion convened by the San Francisco Civil Grand Jury Association. The meeting, held at the San Francisco Public Library’s main branch, was moderated by Michael Stoll, executive director of the Public Press.

“The good news: Everyone is paying attention, now and I’m struggling to figure out what to do,” said Gil Kelley, director of citywide planning for the city.

The other panelists at the July 13 event were J. Letitia Grenier, senior scientist at the San Francisco Estuary Institute; Beckie Zisser, policy campaign manager for Save the Bay; and Steven Goldbeck, chief deputy director of the Bay Conservation and Development Commission.

Officials have long been aware of the need to fortify urban areas against rising seas but have taken years to begin to study the problem. The city’s civil grand jury, a volunteer panel convened by the state courts to independently audit local government, criticized the city’s anemic response to the threat in a report in 2014.

The Public Press published an investigation on sea level rise in the summer 2015. Through an independent mapping project, the report documented 27 megadevelopments that were in the permitting process or already under construction in areas under 8 feet of elevation — a plausible upper-range zone of flooding by the end of the 21st century, according to scientific models. The report concluded that San Francisco, dozens of other cities and counties and regional agencies had few tools to plan for climate change or prevent or alter the most problematic development on the waterfront during the current building boom.

In March, an interagency panel in San Francisco published the Sea Level Rise Action Plan highlighting properties at risk and summarizing possible methods to protect them, from levee construction to wetland restoration.

The city acknowledged the importance of both local and regional cooperation. It also estimated the cost of inaction: $77 billion in the case of a 100-year flood (an event estimated to have a 1 percent likelihood in any given year).

The report offered some potential ways to address sea level rise, but it was not comprehensive and did not propose changes to building regulations. That leaves the Planning Department to grapple with what Kelley called “a design challenge”: to develop a citywide plan by 2018.

A good plan might include “retreat” — moving development zones further inland, Kelley suggested. But that and other solutions could be unpopular.

“For example, who would be in favor of a 9-foot concrete wall along the Embarcadero?” Kelley asked. “But what else should we do — build offshore? Raise buildings on shore?”

While the Planning Department prepares to adapt, some regional coordination efforts are underway.

The San Francisco Bay Conservation and Development Commission was created in 1965 to prevent builders and local governments from overfilling the bay. Any development project within 100 feet of the shoreline needs the commission’s approval.

But four years ago, the commission’s procedures shifted and it began requiring all projects to plan for midcentury estimates of sea level rise. The estimate in 2011 was 16 inches; it has gone up since.

“We were established to stop the bay from shrinking,” Goldbeck said. “Now we have to address an expanding bay that is going to come up on the shoreline.”

Wetland restoration is another major regional response. With the passage of Measure AA in June across the nine-county Bay Area, a flat $12 parcel tax on all properties — homes, businesses and industries alike — is expected to generate over $500 million in 20 years to restore wetlands and create new ones.

Grenier, of the San Francisco Estuary Institute, suggested that these projects could be a long-term and inexpensive way to mitigate the combined effects of sea level rise and storm surges, since wetlands can dampen large waves and give communities more time to evacuate in an emergency. The restoration is an alternative to maintaining concrete walls and levees, she said.

Wetlands buffer shores from higher and stronger tides. New sediment deposited by wave action allows them to grow vertically as the sea rises. However, it is uncertain whether wetlands can grow fast enough to keep up.

“We have to gamble that sea level rise will slow down,” Grenier said. “No one has a 30-foot plan. But if you wait too long, you can’t have the wetland option.”

Stoll questioned the fairness of a flat tax to cover the cost of wetland restoration. Measure AA will apply to all landowners, whether they are low-income residents living miles from the shore or multibillion-dollar companies with newly built waterfront headquarters.

“It was an unfortunate political reality that we had to compromise,” said Zisser, of Save the Bay, a leading proponent of the measure. “If we didn’t compromise with these economic interests, we wouldn’t have been as successful. Nothing polled as high as a flat parcel tax. It’s something we all benefit from, regardless of where we live.”