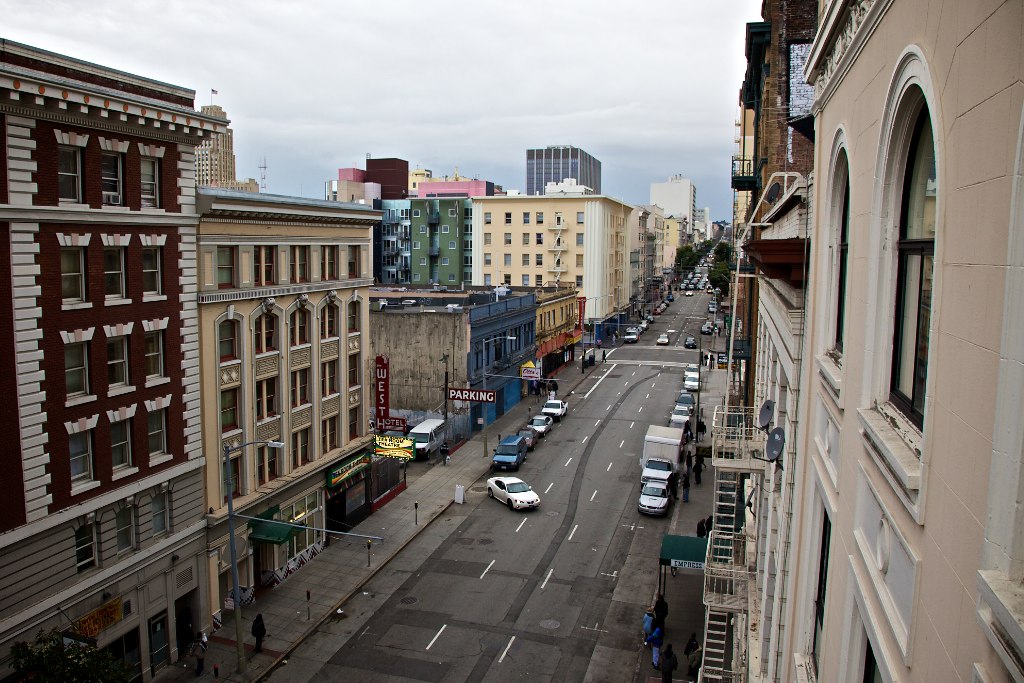 The San Francisco city attorney's office is fighting in court for the right to ban alleged drug dealers from 50 square blocks, or 21 acres, of the Tenderloin neighborhood.

The nation’s largest public interest law firm is battling the San Francisco city attorney’s office over its plan to block 28 alleged drug dealers from setting foot in a 50-block area of the Tenderloin.

Last week, the American Civil Liberties Union of Northern California filed a response to the city attorney’s appeal of a May 2021 ruling that blocked the proposed injunctions. It’s the latest legal step in what’s becoming a drawn-out fight over drug dealing and the rights of people to move freely through San Francisco, and it could have far-reaching implications.

“If the city has the ability to exclude individuals from an area, they could expand that into a tool of social control for any number of disfavored groups,” Chessie Thacher, a senior attorney with the ACLU, said in an interview. “That, I think, is very scary and should get everyone’s attention.”

City Attorney Dennis Herrera first announced plans to issue the injunctions in September 2020, as part of an effort to reduce drug dealing in the neighborhood.

“These actions are aimed solely at criminals who are coming from around the Bay Area to prey on the people of the Tenderloin,” Herrera said at the time. “It’s time for that to stop. We know who these predators are, and we will not allow them to victimize Tenderloin residents with impunity.”

The 28 individuals targeted by the injunctions — most of whom are immigrants from Honduras — were arrested on suspicion of committing low-level drug offenses, and have been charged but not convicted. The court is considering only four of these injunctions. One of the original 28 people died of an overdose and three have had their cases paused. The court has not been able to locate the remaining 20 individuals to serve them.

The case may hinge on whether the injunctions are unconstitutional infringements on the right to travel within the state that appeals courts have recognized as protected by the California constitution. San Francisco Superior Court Judge Ethan Schulman ruled in May 2021 that the injunctions would violate that right.

“We respectfully — and strongly — disagree with the view that our injunctions are beyond the court’s power to grant,” said City Attorney spokesperson John Cote. “Our injunctions would keep known drug dealers out of a single neighborhood that has suffered enough at their hands.”

A major leadership change looms for the city attorney’s office, however. On Nov. 1 Herrera leaves the position he’s held for 20 years to lead the San Francisco Public Utilities Commission. His replacement, Assemblymember David Chiu, was appointed by Mayor London Breed. A spokesperson for Chiu declined to comment on whether he will continue Herrera’s work on the injunctions.

The ACLU — in partnership with law firms Swanson & McNamara LLP and DLA Piper LLP — filed a 59-page brief in response to the appeal last week, arguing that the city attorney “should not be permitted to override statutory language or constitutional safeguards in exchange for political expediency.”

“We thought the city, after reading Judge Schulman’s order, would drop this, because it was right,” Thacher said. “This does feel unconstitutional. The city has no precedent to support their exclusion order. Instead, the city decided to spend more resources on this litigation strategy that’s very misguided, and appeal it.”

While the legal battle continues, the four defendants — who face criminal charges in addition to the civil injunctions — have kept quiet out of their lawyers’ concern for their Fifth Amendment rights against self-incrimination. However, the four did write declarations against the preliminary injunctions in April. Victor Zelaya, 27, was arrested three times between July 2019 and May 2020. He said he has two daughters who live in the Tenderloin, and he fears a restraining order from the neighborhood will prevent him from seeing them.

“I would like to visit my daughters in the Tenderloin and take them to school, to

soccer matches, or to get food in the neighborhood,” he wrote. “I would also like to use San Francisco’s parks and other facilities with them, including within the Tenderloin, to ride bikes and spend time together. I would like to take them to the doctor when they feel sick. I would like to come whenever they call and be able to spend the night at their apartment.”

Guadaloupe Aguilar-Benegas, 28, was in her third trimester of pregnancy when she wrote her declaration in April. The mother of two was arrested five times for alleged drug dealing after her husband died. She expressed a fear of losing access to low-cost medical services in the Tenderloin — such as an ultrasound for her baby — if the injunctions were approved.

The complicated plight of Honduran immigrants in the Tenderloin is one advocates have raised as a critical issue when faced with possible injunctions, and many are going on the record. In April, 15 individuals who work closely with Honduran immigrants in the Tenderloin — from St. James Infirmary, GLIDE Foundation, Legal Aid at Work, and the Drug Policy Alliance, among others — also wrote declarations to the judge in opposition to the city attorney’s request for a preliminary injunction against the four defendants.

Aradhana Tiwari, an immigration attorney with Dolores Street Community Services, frequently handles cases involving human trafficking. In her April declaration, she wrote about a 25-year-old Honduran man she represented who she said was a victim of human trafficking. He was arrested for allegedly dealing drugs in the Tenderloin, but his deep-rooted fear of those he worked for stymied Tiwari’s progress on the case.

“He did not trust speaking on the phone and was scared to engage in any legal process despite being entitled to protection and being qualified for immigration, civil and criminal legal redress as a victim of trafficking,” she wrote. “Most of our meetings focused on reassuring him that we were going to support him in establishing stability.”

He died before the case went to trial. Tiwari said she “strongly believes” his death was a direct result of trauma and stress.

“Through my clients, I have seen deleterious effects of punitive actions being taken without considering the full circumstances of the situation,” Tiwari wrote in her declaration. “It does not make sense to expend already limited resources in this way when such measures do nothing to address the root cause of this problem.”

For now, the injunctions are still tied up in the courts. If the city attorney’s office does continue its appeal, three justices will hear oral arguments for the case before issuing an opinion.

CORRECTION 10/27/21: This story has been corrected to say that the 28 defendants in question have been charged but not convicted.