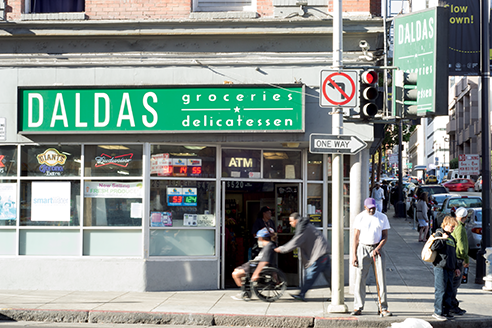 Daldas, at the corner of Eddy and Taylor streets, has a new produce section, courtesy of a healthy food program. Photo by Sara Bloomberg / Public Press

Food justice. It’s a buzzword for access to wholesome, fresh foods for people with limited budgets and nutritional options. The contrasting corner stores that now serve both sides of Market Street show that disparities persist in San Francisco.

In January 2015, the $4 million, 28,000-square foot supermarket called simply The Market opened in the Twitter building at the southeast corner of 10th and Market, across from the new NEMA apartments that rent for $4,200 a month and up.

At the same time, the Tenderloin is getting its best shot at emerging from its historical food desert with the publicly financed greening of traditional mom-and-pops. The latest remake in what will become a string of updated stores, Daldas, has gotten an uptick courtesy of the Tenderloin Healthy Corner Stores coalition.

Daldas, about 1,800 square feet of basics at Eddy and Taylor, near Tenderloin Neighborhood Development Corp.’s way-below-market-rate Curran House for low-income families, has converted to an oasis of healthy options displayed in new bins and on shelves provided through Supervisor Eric Mar’s 2013 ordinance creating the Healthy Food Retailer Incentives Program. A branch of the mayor’s office and the Department of Public Health coordinate with the coalition to encourage all 70 or so of the neighborhood mini-markets to offer fresh, healthy food.

With an annual budget of $60,000 to fund the program, Gloria Chan of the Mayor’s Office of Economic and Workforce Development said her department finances physical renovations with “up to $15,000” for the effort on any given store. The Department of Public Health handles administration and makes expert consultations. The coalition handles community outreach.

So the incentive to bring those mangos, ginger, tomatoes, apples, bananas, cucumbers, tomatoes, potatoes, lemons, onions, garlic, peppers, lettuce, grapes and the occasional watermelon to the front of Daldas’ busy liquor store is a part of City Hall’s nod to food justice.

The majority of the Tenderloin’s corner stores had no fresh produce for sale, and all but eight carried alcohol and cigarettes.

In the nearby refrigerator are waters, teas, juices, aloe, coconut beverages and kombucha, replacing wine and champagne. Deeper in the store are nuts, dry goods such as rice and beans and, in the deli case, blocks of cheese and a selection of meats — chicken and beef links, about a half-dozen different Oscar Meyer sandwich meats, hot dogs, sausages, bologna, bacon, breakfast sandwiches and barbecued beef heroes.

Chips and wine, candy, tobacco, liquor, lottery tickets and sundries as varied as batteries, toiletries, bug spray, condoms, phone chargers, headphones, cat food and even watches are all still readily available. Daldas still sees a steady stream of customers for such things, and beer distributors continue to roll in hand trucks stacked high with their products.

But nowadays, according to the development corporation’s Ryan Thayer, co-coordinator of the coalition, at least these stores’ humble selection of fruits and vegetables sell well enough that they need constant replenishment.

“Anything for the community,” said Satwinder “Bill” Multani, the always smiling, turbaned owner, who bought Daldas eight years ago.

Daldas is rocking from 7 a.m. till 2 a.m., seven days a week, Satwinder said, staffed by him, his wife and two employees. Satwinder is Punjabi from northern India. He said the store, named by his predecessors, means “friendly place” in Arabic.

Although the cash register at Daldas is ensconced behind what appears to be a bullet-proof, shoulder-high partition, and security cameras and strategically placed mirrors are plainly visible, Multani said that crime is not much of an issue for him, and that he can usually shame the occasional shoplifter with reminders that his is a community store and should be treated respectfully.

Meanwhile, across the streetcar tracks on the south side of Market Street, past the ever-present Admiral security guard at the front of The Market, its spacious aisles lead past sumptuous displays of fresh fruit and vegetables and high grade coffee and craft beer offered at commensurate prices. There’s a butcher, baker, fishmonger and a wine shop, too.

Customers can take a seat to eat from steaming trays of prepared foods such as barbecued chicken, Cajun potatoes and roasted vegetables, all for $8 per pound. At the rear of the market is concessionaire Azalina’s, offering Malaysian food. There is also a pizzeria, a taqueria and a tapas bar with beer on tap and televisions overhead. Several other food concessions operate from alcoves — each nearly as large as Daldas’ entire space — where shoppers can peruse chocolates, ice cream and other sweets made by the local company Nuubia, which describes its “amazing signature confections” as “the best artisan indulgences in the precise French discipline” made by “the first food producer in the world to earn the right to be labeled ‘Wildlife Friendly,’ ‘Gorilla Friendly’ and ‘Palm-Oil Free.’” Beauty products maker EO Exchange operates from another alcove, at the front of the store.

“Love Life. Live Clean,” its pitch on The Market’s website urges, is so over-the-top PC that it smacks of satire: “Indulge your senses with EO natural & organic personal care, crafted with pure aromatherapeutic essential oil blends … natural, GMO-free, gluten-free, and cruelty free,” sourced from organic ingredients “whenever and wherever” possible and “formulated and manufactured” in, you guessed it, Marin County.

There’s a sushi and oyster bar where the happy-hour bivalves go for a discounted price of $1.50 each and each glass of wine is $1 off, Market spokeswoman Elaine Trierweiler said.

In the south corner, accessible from 10th Street, is the uber-high-end Blue Bottle coffee concession.

A survey conducted by the coalition in 2013 found that the majority of the Tenderloin’s corner stores had no fresh produce for sale, although all but eight, mainly the halal markets, carried alcohol and cigarettes.

The coalition arose out of community frustrations over the inability to attract a full-scale supermarket into the neighborhood despite years of advocacy. The coalition began working with Tenderloin merchants to provide readily available fresh food.

The resultant Healthy Retail S.F. program this year is transforming three Tenderloin stores, another in the Bayview and one in Oceanview.

In 2014, as the program finally got under way, Radman’s, at 201 Turk St., was the first corner store to get made over. Supervisor Jane Kim in 2015 presented owner Fadhl Radman with the Brother Kelly Cullen Service Award for emphasizing fresh produce, adding a meat counter and bulk bins for dry goods.

The coalition also has been working with Amigo’s Market at Ellis and Leavenworth to improve its produce display with new shelving, signage and architectural consultation on how best to use the limited space. In the summer of 2015, the MidCity Market in the 900 block of Geary also underwent changes, most noticeably in an impressive U-shaped refrigeration unit the store helped pay for itself, along with consultation on store design, product placement and improved signage.

Jobs at the Market

At Amigo’s, the coalition also helped coordinate with the EatSF program to enable its clients, typically those at risk of chronic diseases, to use its produce vouchers, becoming one of just four stores in the Tenderloin to accept them.

The Market, adjacent to the opulent Dirty Water bar, is the site of what the mayor’s office touts as its biggest success in providing jobs for San Franciscans — those here before the tech boom, that is. A dozen District 6 residents from the Office of Economic and Workforce Development’s training programs were among the 43 hired at The Market early this year.

The jobs pay San Francisco’s minimum wage, except for one or two line cook or lead line cook spots, where the pay ranges from $15 to $17 per hour, according to city data.

That might be enough for them to afford The Market’s grass-fed ground beef at $5.99 a pound or one of its pound-size mangoes at $1.49 each — they cost 30 cents more at Daldas — but maybe not the organic tomatoes that run up to $5.49 per pound.

The Market, whose owners plan to open two more such stores in the city in 2016, is of a scale and location to be the neighborhood’s longed-for supermarket. But it’s not.

The city’s meager subsidy of the Tenderloin corner stores’ transformation to healthier fare is in keeping with other City Hall policy on the Tenderloin–tech interface.

Twitter and related businesses moving into mid-Market got a tax break worth tens of millions. If the bottom line is your target, Mayor Lee and Supervisor Kim hit a bull’s-eye and the Tenderloin way of life is simply collateral damage. Their giveaway lured a consumer base affluent enough to finally be able to support a neighborhood supermarket.

But The Market is a seven-digit resource, out of reach for most of those who live in the Tenderloin. Their corner stores, like Daldas, will phase in healthier fare one market at a time under the city’s investment of $15,000 per store.

Central City Extra is a monthly newspaper that covers San Francisco’s inner-city neighborhoods — the Tenderloin, Sixth Street and Civic Center. It is published by the San Francisco Study Center. This article is part of a special reporting project on the cost of living in the Winter 2016 print edition of the Public Press.

Mark Hedin is a news journalist, editor and distributor who lives in San Francisco. He plays upright bass for several bands.

Geoff is the executive director of the San Francisco Study Center. He is also the editor and publisher of the Central City Extra, a monthly newspaper for the Tenderloin, Civic Center and Sixth Street corridor.