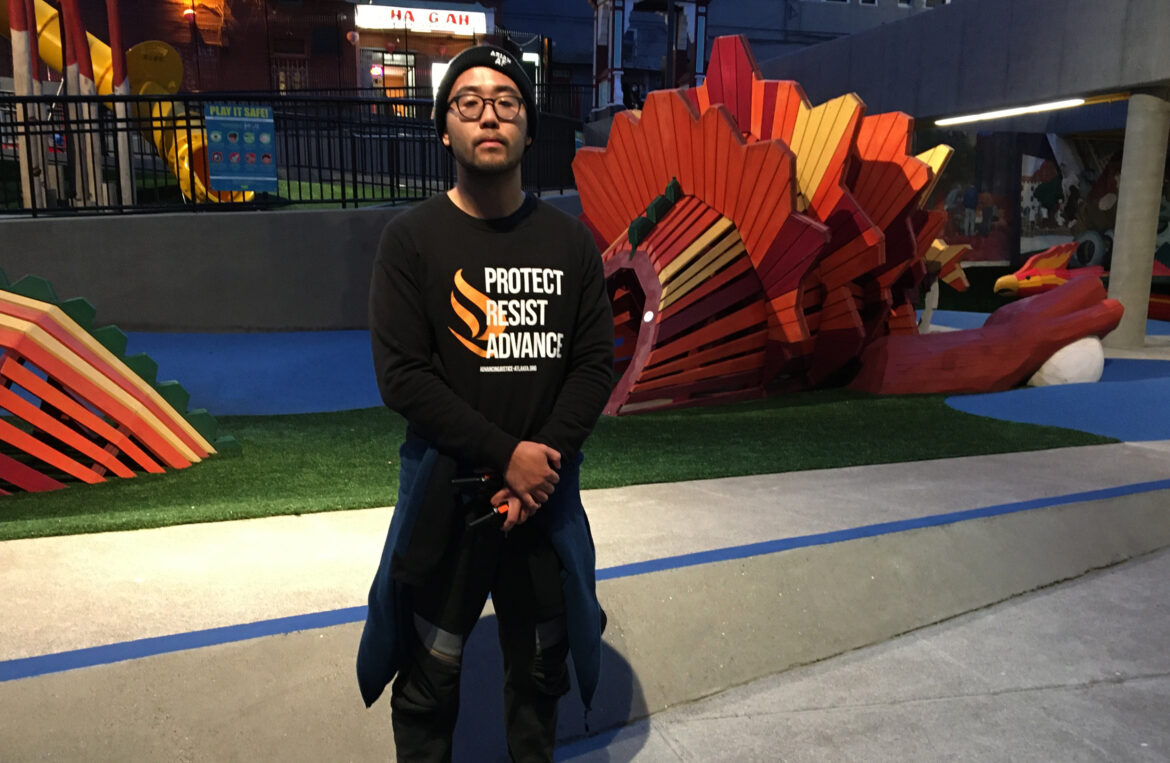 Scanning the street as he walked, Forrest Liu, a group leader with the Chinatown Safety Patrol, stopped occasionally to scrutinize a car or a person. The protocol he had laid out for the handful of volunteers walking with him that day was “stop, observe, record, report.”

“Just keep an eye out for anything that looks suspicious,” Liu said. “The end goal is to not patrol but to use, you know, our manpower and our resources to make these people safe.”

The spate of violence against Asian Americans, particularly seniors, has spurred communities around the Bay Area into action. In Chinatown, several groups of volunteers can regularly be seen patrolling the street, keeping an eye out for trouble. “Civic” tagged along with one group on their recent evening rounds.

The stop, observe, record, report acronym was taught to Liu by more seasoned activists, he said.

“We’re not trained law enforcement professionals. We don’t have martial arts or self defense training,” Liu said. “My group safety is just as important to me as the safety of the community.”

The patrols have no official collaboration with the police department, he said, though they do know some officers who patrol the neighborhood and those officers know about the patrols.

Among Liu’s companions that evening were a few newcomers, from all over San Francisco, and a few repeat volunteers.

“I like to think of each patrol as kind of like a training for future patrols, and the people who are going to come now, they’re going to lead patrols in the future,” Liu said.

His own involvement with the patrols only began about a month and a half ago. Though Liu is not a Chinatown resident, he was spurred into joining a safety patrol by the killing of 84-year-old Vicha Ratanapakdee, who died after he was pushed to the ground, striking his head on the pavement, while out on a morning walk in San Francisco in January.

“There’s a lot of stuff that happens that’s awful, but I mean, to see somebody who looks like someone that could be, like, your friend’s dad…I felt like I knew him, you know?” Liu said.

Through his involvement with the local Yang Gang — supporters of former presidential candidate Andrew Yang — Liu connected with the people who he would eventually go on patrols with. That group also led to a connection with Max Leung, who started a neighborhood safety patrol .

“The goal is to deter and prevent these attacks from happening. And my hope is that just by us being out here, first and foremost, that we’re a deterrent,” Leung said.

Liu said he has already seen how a little probing can defuse a tense situation.

“There is really a power of just showing up,” he said. “When three or four people file in behind you, it really kind of dissipates the tension.”

Once, he said, someone who appeared to be homeless was screaming at a local merchant. Liu went inside to see what was going on and asked the man if he was OK.

“Which is extremely disarming question, by the way, right? Like, ‘What are you doing?’ is an aggressive question,” he said. “Then my group came in behind me. And he, you know, you could see him maybe run a mental calculation, you know, like, ‘how am I gonna respond?’ He ended up running away.”

Ultimately, Leung said, it would be nice for the patrols to no longer be necessary.

“It’s not about how many situations we encounter or we can assist with. For me, it’s all about if nothing happens, that’s success,” he said.

But it may be a while before that becomes a reality.

“These problems, it’s not going to go away anytime soon, in the foreseeable future,” he said. “Take care of yourselves and one another. And let’s all together, try to create the world that we want to live in, you know, play our part and play our role.”