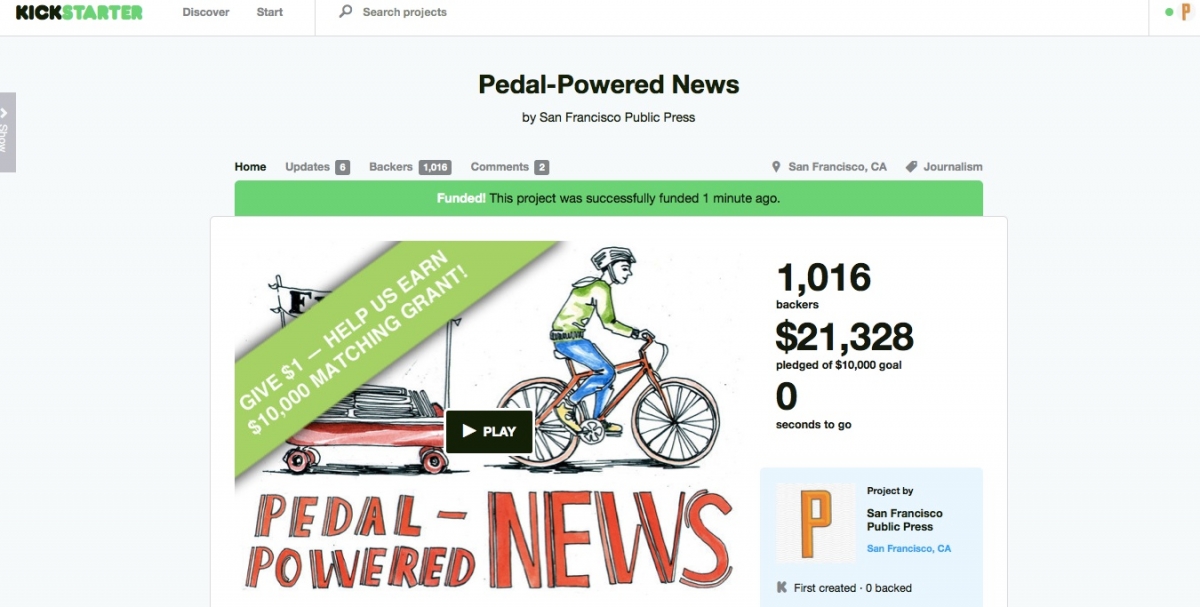 We did it! And it all happened thanks to you. Throughout this campaign, we were amazed by your generosity in backing Pedal-Powered News and by your contagious enthusiasm for supporting local public-interest journalism.

With your help, we raised $21,328 — more than double our Kickstarter fundraising goal — and recruited 1,016 backers, which unlocked an additional $10,000 in matching funds from the John S. and James L. Knight Foundation.

If you followed the last few hours of the campaign, you know that we were showered with support on social media. The campaign went viral and reached 1,000 backers at 10:46 p.m. — just in the nick of time.

We love that 16 of you joined us even after we reached our participation target! If you wanted to back Pedal-Powered News and ran out of time, you can always support this effort by becoming a member on our website.

From all of us at the San Francisco Public Press, we can’t thank you enough for supporting this nonprofit, noncommercial news organization and our efforts to produce in-depth, data-driven, consequential investigations on under-reported topics.

We look forward to launching our team of newsies-on-wheels to deliver our summer issue later this month! Watch for a follow-up survey to verify the spelling of your name for publication on thank-you pages online and in our summer print edition, which is set to arrive at the end of July.

Special thanks to Knight Foundation and to the Investigative News Network for taking a chance with our offbeat idea for engaging the community and getting the Public Press into the hands of more local readers.

With sincerest thanks and great appreciation,

Lila LaHood, Michael Stoll and everyone at the San Francisco Public Press