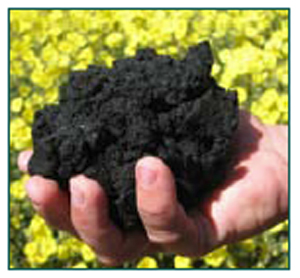 A sample of the city’s biosolids compost. Photo from the San Francisco Public Utilities Commission.

When activists dumped processed sewage compost on the steps of San Francisco City Hall in March, the stunt was meant to draw national attention toward a supposed hypocrisy afoot in the greenest city in America.

San Francisco, activists claimed, was poisoning its residents by giving away “toxic sewage sludge,” a mixture of treated sewage and yard waste for use on home gardens that’s a stew of all that goes down the city’s drains and sewers.

Reeling from the controversy, the San Francisco Public Utilities Commission immediately suspended the giveaway program and this summer completed a series of expensive tests in an effort to prove its safety. Results in hand, the commission pronounced the “biosolids compost,” as it is officially called, no worse than the packaged fertilizers sold at commercial garden stores. The giveaway program, however, remains in limbo until a September commission meeting.

The controversy, which is far from over, is part of a national debate on what to do with the country’s 3 million dry tons of sewage sludge produced each year. Proponents see biosolids as a resource that improves soil nutrients and recycles waste back into the natural system. Yet a growing number of communities are opposing the use of biosolids out of fear that it spreads harmful contaminants and pathogens, and in some cases smells bad.

“Toxic sewage sludge shouldn’t be used, period,” said John Stauber of the newly formed Food Rights Network and author of the 1995 book “Toxic Sludge Is Good for You.” “We’re not talking about human manure. We’re talking about everything that goes down the drain is ending up in sludge.”

In California, concerns have been notably fierce. In Kern County, the state’s breadbasket, a county ban on the land application of processed sewage sludge from Los Angeles was upheld by the U.S. Ninth District Court in a precedent-setting case. (The U.S. Supreme Court refused to take Los Angeles’ appeal in June.)

Meanwhile, communities like San Francisco that have permitted its use have been doing so under federal regulations. Some independent experts, however, say that the U.S. Environment Protection Agency’s regulatory rule, to which San Francisco is abiding, is inadequate and outdated.
“The EPA rule came out in 1993 and was based on science from the 1970s and 80s,” said Murray McBride, a soil chemist and head of the Cornell University Waste Management Institute.
McBride, who studies biosolids, said that many other chemical compounds appearing in the waste are not routinely tested before land application. The EPA requires testing for nine heavy metals, but not dangerous and long-lasting chemicals like DDT and PCBs, which have been phased out for more than three decades but still appear in the environment.
Nor do the testing requirements take into account a host of emerging chemicals of concern that have been introduced into the environment in higher concentrations over time, like endocrine-disrupting flame retardants, phthalates and the antibacterial agent triclosan.
McBride said part of the problem with processed sewage sludge is that you cannot separate out the bad chemicals from those that have value, like nitrogen and phosphorus.
“It’s like going to the supermarket and finding out there’s glass in my box of cornflakes,” he said. “It’s perfectly good food but it has no value.”

Since the early 1970s, the EPA and the wastewater treatment industry have promoted the recycling of sewage sludge on land. The practice intensified in 1992 when a ban on ocean dumping, a previously common method of disposal, freed up a volume of extra sewage sludge. The options? Incinerate it, cover landfills with it, or apply it to land to bolster soil nutrients.

These days more than half the U.S. supply of sewage sludge ends up on land, which commonly includes farmland, gardens, golf courses, parks and forests, according to the EPA. It goes unlabeled in many commercially sold composts. A common brand is Milorganite, made from sewage sludge from the city of Milwaukee.

For farms and garden application, including the San Francisco program, the sludge must be heat treated to destroy harmful pathogens like salmonella and E. coli, but no additional precautions are taken for chemicals and metals that may appear in the food supply.

A 2002 National Academy of Sciences report critically reviewed the EPA’s regulations and concluded that, on balance, biosolids are “a widely used, practical option for managing the large volume of sewage sludge generated at wastewater treatment plants that otherwise would largely need to be disposed of at landfills or incineration.”

However, the academy report also noted areas of concern. Though there is no documented evidence that the EPA rule has failed to protect public health, the existing science does not prove the safety of biosolids either. To clear up the “persistent uncertainty” surrounding human and environmental exposure, the report called for more studies on chemicals and an up-to-date risk assessment analysis. It also urged the EPA to consider new categories of chemical compounds for testing, including flame retardants, surfactants, chlorinated paraffins and pharmaceuticals that have made their way into the nation’s sewage supply.

Given an inundation of anecdotal evidence on adverse health effects from biosolids exposure, the academy report advised the EPA to begin epidemiological studies on vulnerable populations like biosolids appliers, farmers and communities near sites where biosolids have been spread.

Seven years after the academy report, an EPA spokeswoman said the agency’s rule on biosolids remains unchanged, although the agency is conducting additional studies on 15 chemicals (the agency cites “budget constraints and competing priorities” as reason why it can’t implement the rest of the Academy recommendations). In 2009, the EPA released an updated national survey of the sewage sludge emanating from 80 of the country’s 3,500 public wastewater treatment plants. It found what opponents had feared: flame retardants in all but one sample, pharmaceutical residues in more than half and 27 metals in virtually all samples. Antimony, a toxic metal that affects humans in ways similar to arsenic poisoning, was found in a majority of samples.

One aspect of the study that stood out to McBride was the variations in chemical concentrations and heavy metals across samples. That means an individual’s exposure could be really high, he said.

“An individual who picks this stuff up, they’re applying this on rather small gardens at high rates of application. These are levels that amount to 50 to 300 tons per acre equivalent,” McBride said.

Such concentrations are far beyond what would be allowed on farmland because of restrictions governing runoff in the Clean Water Act.

San Francisco does not apply biosolids to public land, according to the Public Utilities Commission. But beginning in 2007 it sought to raise awareness of the city’s annual production of 80,000 tons of sewage sludge by bringing a small fraction of it back from the treatment facility in Merced. Every fall, the city has been distributing 20 tons of biosolids compost to residents to use in home gardens.

“It’s really just an educational tool and an opportunity for us to tell the public that this stuff doesn’t disappear,” said commission spokesman Tyrone Jue.

The commission sees the biosolids compost program as a way to recycle waste. Jue points out that whatever is in the surrounding environment in San Francisco eventually ends up down the drain.

“All the chemicals we are talking about are ubiquitous in the environment,” Jue said. “They are everywhere and not unique to biosolids compost. They are floating in the dust, on the streets and in the everyday products we use. We wholeheartedly believe there are ways to improve the quality of our waste stream. It starts with how we choose to live our daily lives.”

A scientist employed by the Food Rights Network to test four classes of chemicals of emerging concern says he was not surprised by what he saw in San Francisco’s results.

“This is very similar to what we’ve seen in other materials,” said Robert Hale, a professor at the Virginia Institute of Marine Science. “I don’t think there’s anything particularly special about San Francisco.”

Present were flame retardants at levels “similar to what you find in indoor dust” (731 parts per billion). DDE, an eroded form of DDT, was found as well but “not a lot of it” (41.8 ppb), Hale added. The antibacterial additive triclosan was there, too, in degraded form (145 ppb) although no one really knows how much of it passes from soil up the food chain. (Jue said the triclosan found in that study is up to 10,000 times less than what is found in antibacterial soap.)

Though the numbers do not look alarming, Hale said the science that is cited for safety considerations has its limits.

“We typically get little pieces [of information] at a time and sometimes our initial viewpoint on chemicals is flat out wrong,” he said. “Flame retardants were used for 30 years on the assumption that they were in plastics and would never break down. Then we started finding them in wildlife and humans. The highest levels are found in children because children have more intimate contact with dust.”

A growing body of evidence is now showing that flame retardants disrupt the nervous system, especially problematic in the developing bodies of fetuses and infants. In 2005, the EPA initiated a phase-out of some types of flame retardants present in furniture, mattresses and other items in the home after a decade of data showed that the chemicals were accumulating in breast milk.

Although individual sources of exposure may be small, Hale said the accumulation of chemicals like flame retardants — from dust in homes, gardens spread with biosolids and food — would be significant. Flame retardants take an eternity to degrade, Hale said.

“You can hit substantial levels in soil when you apply it multiple times. The second time you apply you just double it,” he said. “They assumed that everything but the heavy metals broke down. That’s a naïve viewpoint.”

Stauber of the Food Rights Network advocates the “precautionary principle” — better to be safe than sorry. With chemicals all around us, this is where the major fraction in the two sides of the biosolids debate divides. How do you make decisions with so many unknowns? What is an acceptable level of risk? As Jue points out, the logic of the precautionary principle eventually can lead to “everything is a potential health hazard.”

Such a debate will surely unfold at a public meeting scheduled next month about the biosolids compost program. In the meantime, for more on the political debate between the Food Rights Network and the utilities commission watch for an upcoming blog post on Way Out West.

This story was co-published with Way Out West, a Bay Area environmental news website.