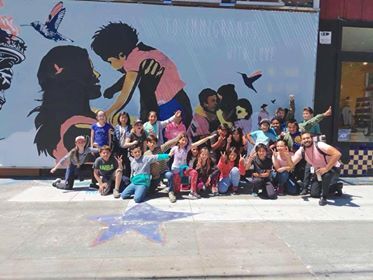 Teachers in San Francisco have begun pledging their federal coronavirus relief checks to undocumented members of their communities.

“Our union has fought to defend immigrant rights, to support families in need,” said Frank Lara, a teacher at Buena Vista Horace Mann school in the Mission who proposed the idea to the union. “As educators when we get trained on issues of equity and social justice, we know that we have to give more attention, more resources, more support to the people who have the most need.”

Within about a day of bringing the idea to the union, Lara said some 100 educators had responded, pledging around $35,000. Ten had pledged their entire anticipated relief check. Lara calculates that if half of the union’s 6,000 members give 10 % of their stimulus checks, the union could pool some $360,000 in funds, enough for about 300 stimulus check equivalents to go to undocumented individuals.

Lara and other members of the United Educators of San Francisco still have jobs and health insurance through at least the end of the school year. “We feel very privileged in being able to still receive a check in these very difficult times,” he said. “We know that that’s thanks to our advocacy and the support of our families.”

He has pledged $1,000 of the check he expects to receive from the federal government.

“Nobody has said, well, teachers should be helping to support immigrant families,” said Susan Solomon, president of the United Educators of San Francisco. “It’s because we are choosing to do what we think is the right thing.” Contribution is entirely voluntary and educators are being asked to give only what they can afford. Most paraeducators, she said, do not normally work full time and many have second jobs.

“We also know that some of our members are struggling as well, and they really need that $1,200,” Solomon said. “We also want to make sure that we are compassionate among our own members, and if somebody can’t do it, it’s understandable.”

Another contributor is Jael Castro, who teaches fourth-grade students at Buena Vista Horace Mann. She said she texts their parents every day and hears directly about the upheaval the coronavirus pandemic and measures to contain it have caused.

“I’m getting calls from families and they’re like, maestra, what do we do?” she said, using the Spanish word for “teacher.”

Castro and others also see deep injustice in the decision to exclude workers without social security numbers from receiving stimulus checks despite their contribution to the economy and their acute vulnerability to contracting the virus and losing their incomes.

“Many people now are losing their jobs, are getting fired, and will not get a stimulus check like others. It’s unjust,” said Luz Rodriguez, president of the Parent Teacher Association and English Learners Advisory Committee at Buena Vista Horace Mann. “Our community needs it, and year after year they struggle.”

Undocumented renters often live with their whole families in a single bedroom, subletting without the protection of a lease, Castro said. Families she works with are worried about money for food, rent, and childcare. As Mission Local reports, undocumented families are facing an especially grim future as the pandemic progresses, barred from accessing aid because of their status.

Castro said she is pledging $500 of her anticipated check to undocumented San Franciscans, and the rest will go to her mother.

Details about the distribution of the funds are still being developed, Lara and Solomon said. Rodriguez suggested fund administrators could try to identify beneficiaries for the money without exposing their status through the numbers they use to file taxes, known as ITINs.

The union has been coordinating with Supervisor Shamann Walton, who on Tuesday proposed the creation of a fund specifically for undocumented families that could be used to distribute the money from educators’ stimulus checks.

Lara said getting lawmakers involved is crucial. “This has to be a political movement that demands rights for immigrant families,” he said.

Solomon said she has already received inquiries from employees in other sectors who want to know if the pool is open to contributions from non-teachers, which it is. She hopes the union’s strategy will catch on elsewhere.

“We would hope that this is something that other educator unions and other unions in general could look at and see as a model,” she said.

CORRECTION: This article has been updated to correct the calculated amount Lara expected union members might raise. His estimate reflected the amount raised if half the membership pledged 10 % of their checks, not all 6,000.