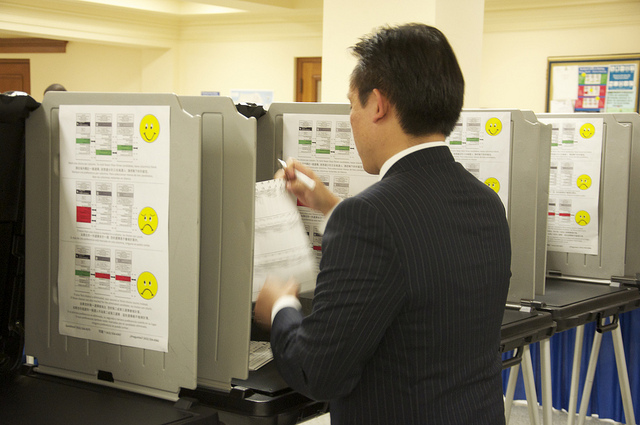 Earlier this year, the Board of Supervisors wrestled with changing the way the city elects mayors, district representatives and other officials. Two proposals would give San Francisco voters a choice: expand the instant – runoff voting system, in use since 2004, or return to a general election with a possible later top two runoff.

On Feb. 14, the Board of Supervisors tabled Supervisor Mark Farrell’s proposal to repeal ranked-choice voting on a 6-5 vote.

At the same meeting, Supervisor David Campos’ measure to amend the system was sent back to the Rules Committee on a unanimous vote. On March 6, Farrell introduced a modified proposal that would abolish ranked-choice voting in all citywide races, except for district supervisors. Both measures could see a vote on the November 2012 ballot.

Why does this matter? Opponents of ranked-choice say the relatively novel approach still confuses voters. Opponents of the two-election approach say it wastes money.

Experts disagree about the numerous strategic political merits of each system. But the method used to decide city races could affect the tenor of campaigns and timing of elections, as well as voter turnout.

A voter-approved ballot measure in March 2002 brought the city ranked choice voting. Ballots allow voters to select up to three candidates in order of preference. An immediate “runoff” occurs, eliminating candidates with the fewest votes and redistributing the voter’s next choices until one office-seeker passes 50 percent.

Previously, candidates in November elections needed a majority to win, but races with three or more candidates often precluded the “50 percent plus one” requirement. So the top two would enter a December runoff. The problem there was that turnout typically dropped 30 percent from the month before.

San Francisco is not alone in the Bay Area: Oakland, Berkeley and San Leandro have adopted ranked-choice voting. Nationally, Portland, Maine; Minneapolis; and Ann Arbor, Mich., use the ranked-choice method.

Two plans were initially proposed for the June 2012 ballot. Two members of the Board of Supervisors, representing different blocs, introduced them late last year.

Campos, one of the self-identified progressive members of the board, proposed a measure to increase the number of ranked votes on each ballot from three to as many as votes as candidates in the race — a method similar to Portland’s.

Campos’ proposal was a counterattack to a plan by Farrell, one of the board’s more politically moderate members. Farrell wants to abolish ranked-choice voting and move the election cycle to September general elections and November runoffs.

“We’ve found out we have a system that works well,” Campos said. “What we’re producing is a way that keeps the system, but with tweaks to it. The answer is not to throw it out, but to make it better.”

The additional costs to amending ranked-choice voting would be negligible, Elections Department Director John Arntz told the board’s Budget and Finance Committee at a hearing late last year. He said the only new cost would be a software vendor’s annual fee, about $70,000.

Farrell filed his proposition last Nov. 8, the same day the city elected its mayor, district attorney and sheriff using ranked-choice voting. He argued that the system complicates the electoral process. He cited an ABC 7 News segment in which four voters gave varied (and mostly wrong) explanations about how ranked-choice voting worked.

“I don’t think we should promote a way that confuses the voter,” Farrell said. “People should be concerned about who to vote for or what to vote for, not how to vote.”

Farrell also points to two recent developments as evidence of the system’s failure: rising public sentiment against Jean Quan, the embattled Oakland mayor who was elected under ranked-choice voting; and overvotes, in which two votes are cast in the same column or the same candidate is marked in more than one column. Although Elections Department data from 2011 show only 0.3 percent invalid ballots out of a total of 197,242 cast, Farrell argued that overvotes were more likely to occur in low-income districts.

Advocates for ranked-choice voting say it saves the costs a traditional runoff, while deciding a winner in shorter time.

“In today’s climate, where cities are struggling,” said Stephen Hill, author of ranked-choice voting measures in San Francisco and Oakland, “saving $7 to $10 million is not insignificant.”

However, economic arguments are not swaying opponents. In 2009, Ron Dudum, a former supervisorial candidate in District 4, sued the city, alleging that the system violates principles of “one person, one vote” and equal protection under the law. Dudum, with financial support from the California Apartment Association, lost the suit in state court and an appeal in federal court.

Hill said the failed legal challenges and continued critical news coverage and editorials create and feed public sentiment against ranked-choice voting. While the plaintiffs failed in litigation, Hill said, “They could win in the court of public opinion.”

The opposition does not surprise election law attorney Alix Rosenthal.

“It’s always been the grassroots who support RCV and the moneyed interests who opposed,” she said. “The runoffs were where the more moneyed candidates would win after the grassroots campaigns would burn through their cash in the runoff. The candidates with more money would do better because of more access to cash.”

As a former San Francisco elections commission president and staffer in the Oakland City Attorney’s Office, Rosenthal had an up-close look at ranked-choice voting implementation in both cities, and accused detractors of political opportunism.

“The interesting thing about their argument is the opponents waited for a couple of election cycles” before  launching a campaign against the system, she said.

As mandated by the ranked-choice voting law, the Elections Department conducts a public outreach campaign for every city election. Staff talk with voters at street fairs, partner with community organizations, give presentations at civic meetings and publish printed and online how-tos. In addition, the department uses TV, radio and billboard campaigns. But it also does a lot of one-on-one.

For the 2011 election, which included a high-profile le mayoral race with a dozen serious candidates, outreach liaison Denise Van Alstine estimated that 12,411 people attended voting presentations at community meetings between June and November.

“We had much more requests this period, because it was much more in the public eye,” she said.

Yelena Kravtsova, a training supervisor in the department, tutored poll workers on potential voter queries: How are ballots marked? Do all three choices get marked? What happens if the machine spits the ballot back?

The workers responded with scripts, posters in polling places and flip charts on voting machines. When asked if voters understood the explanations, Kravtsova said, “I would think yes, because it’s not just a verbal explanation. There’s an illustration on the machine. It’s trilingual — English, Chinese and Spanish. They have visual representation and verbal and written explanations that are available. For any further questions after looking at the info, hotlines are available for more in-depth questions.”

Van Alstine said voters walk away able to figure out the system.

“They understand by the end of the presentation,” she said. “They might need an analogy here and there, but by the time we discuss it, they understand.”

After the city’s first election using the system in 2004, an exit poll from the Public Research Institute at San Francisco State University found that 86 percent of voters favored this method over traditional runoffs. Another poll in 2005 yielded similar results.

The institute found that most voters — crossing ethnic and economic lines — made the transition with ease. According to polls, voters were aware of, understood and used this method to rank their preferences.

The study also determined that local voters were less likely to see their ranked-choice ballots as “wasted” and found improvements in political discourse.

Rich DeLeon, a retired political science professor at San Francisco State University, wrote that in his opinion, ranked-choice voting “is particularly well-suited to cities like San Francisco that have a high degree of racial, ethnic, social and cultural diversity, a high level of political activism and mobilization, and multiple axes of political conflict.”