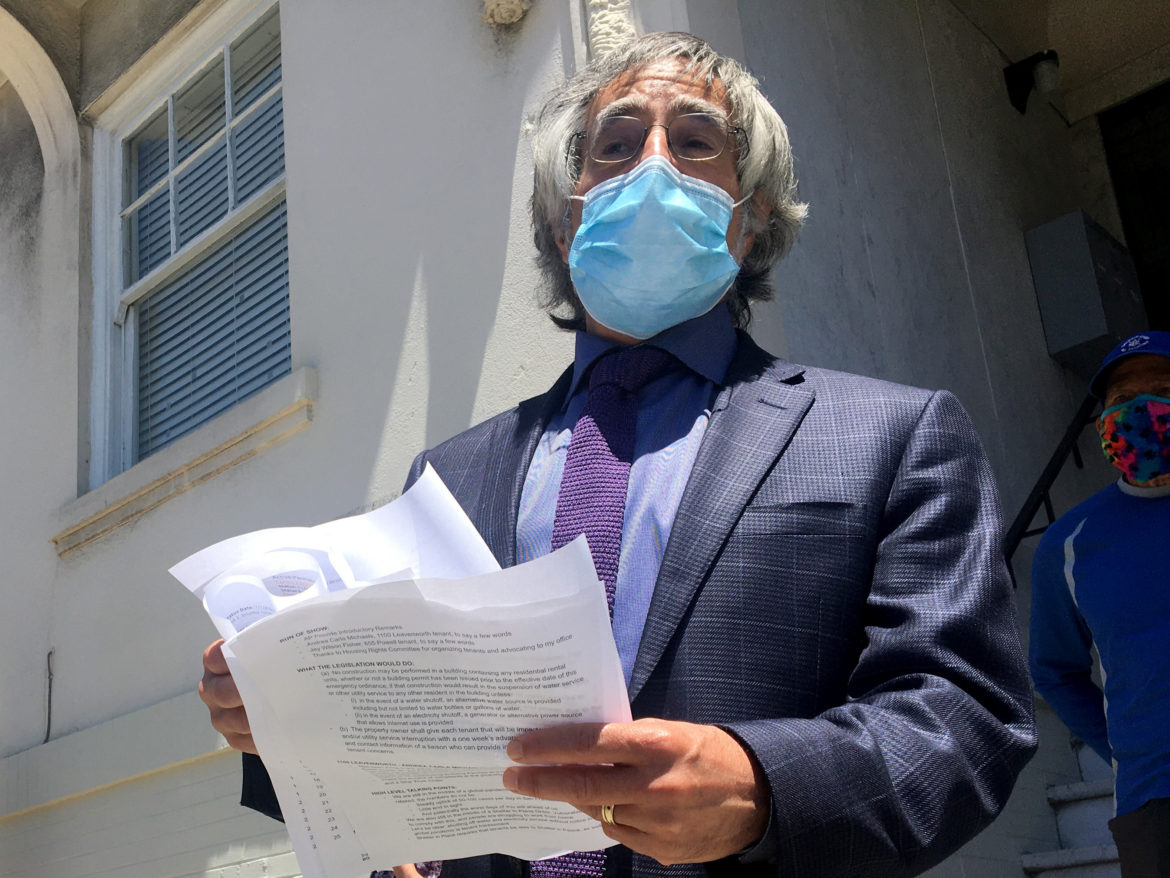 Supervisor Aaron Peskin has introduced legislation that aims to keep landlords from engaging in construction work in ways that disrupt the lives of their tenants who are sheltering in place. For example, it would require that landlords provide alternative electrical and water supplies if the construction they’re doing results in either being shut off.

“While we are sheltering in place, it is profoundly important that the residents of these buildings can shelter in peace,” he said.

Peskin announced the proposal in front of a Nob Hill apartment building, where one tenant says construction is constant and most residents have left. Andrea Carla Michaels, a professional namer and crossword puzzle creator, is best known in San Francisco as “the Pizza Lady” for her practice of distributing pizza to homeless people.

Michaels says construction in the building has been significantly disruptive to her life.

“From literally the day, every time he moves someone out, he begins floor-to-ceiling renovations without permits. When he’s forced to get a permit, they’re — he exceeds the scope of them,” she said. “My electricity goes out without notice. If I’m lucky, I don’t lose … my work for the day.”

She also said things have gotten ugly between her and the landlord, and that she is filing a harassment lawsuit against him. Among other things, she alleged he has cursed at her, has broken the cart she uses to distribute pizza, and has used constant construction and neglect of major repairs to coerce other tenants to move out. She said the building is empty but for her and one other tenant, who is not currently at home.

Reached for comment by the Public Press and “Civic,” the landlord denied having harassed or bullied anyone, and said tenants are always given the required 24-hour notice before water or power are shut off. A recorded interview was scheduled, but when reached a second time to conduct it, the landlord said on the advice of his attorney and due to ongoing litigation, he had to decline to comment.

A long string of complaints about code violations peppers the building’s online history, including about work exceeding the scope of a permit, work being conducted without a permit and disturbance of lead paint without proper containment measures. Many of the complaints were substantiated by notes from building inspectors and subsequently marked as addressed, but two items remain unresolved. For one of them, a notice of violation has been sent.

The legislation being proposed isn’t just about the dispute between Michaels and her landlord. Other tenants around the city have complained about constant construction while they’re sheltering in their homes during the pandemic.

“I know neighbors throughout San Francisco who had been facing water shutoffs during this pandemic, and it’s unacceptable and this really, really needs to stop now,” said Lenea Maibaum, an organizer with the Housing Rights Committee.

Non-essential construction was prohibited by the city’s shelter-in-place order when it first went into effect. In early May, as restrictions eased, construction was allowed to start back up again. Peskin said this proposal does not amount to a complete reversal of that.

“This is not aimed at stopping all construction in San Francisco,” he said. “This is a very straightforward, common-sense piece of legislation that will allow people like Andrea and Lenea to shelter in peace, it will allow them to flush their toilet, to drink some water, to run their computer, to not have their food spoil in their refrigerator.”

Editor’s note: The San Francisco Public Press is among the publications for which Michaels creates crossword puzzles.