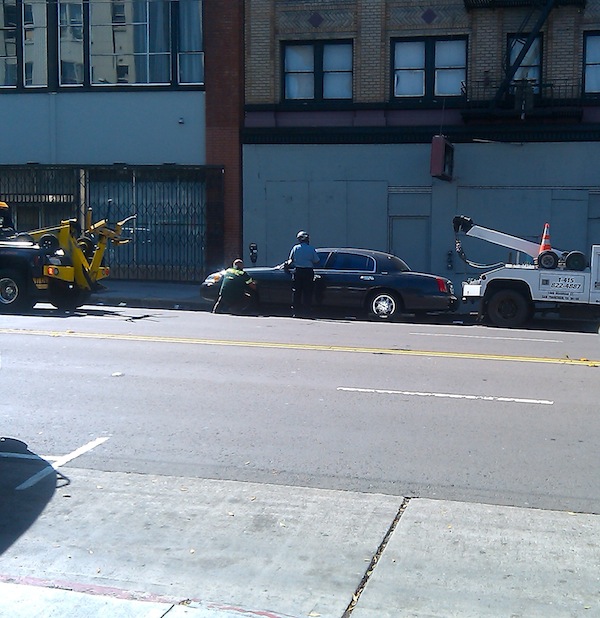 Of the 168 parking control officers surveyed by the city controller’s office, 73 percent said they could benefit from more training on parking violation codes. Photo by Jerold Chinn / SF Public Press

The audit, conducted by the city controller’s office,  looked at how parking control officers were deployed in the city, if officers are adequately trained and if staffing levels are sufficient. The study took place between July 1, 2010 and Dec. 31 of 2011.

The report found that although officers received training before patrolling the streets, of the 168 officers surveyed by the controller’s office, 73 percent said they would benefit from more training on parking violation codes, and 47 percent said they are unsure how to enforce some of the city’s parking regulations.

The controller’s audit found that there is no consistent ongoing training for officers  to update them on current enforcement parking codes after they had been hired.

The transit agency said parking officers “receive conflict resolution training every few years,” but it has not offered it recently. A survey revealed that 37 percent of officers would like more training in dealing with angry motorists.

The controller’s office recommends that officers get more training on parking violations with high dismissal rates.

Under city agreements with the Port of San Francisco and the Recreation and Park Department, there are no provisions for the Giants and 49ers to pay for parking enforcement control during home games. Oddly, neither Giants nor 49ers homes games are not considered “athletic events” under the city’s transportation code, so no recovery costs can be made to the transit agency.

The report also found that treatment of  street fairs and festivals is inconsistent, with some paying for the transit agency’s parking enforcement services, while others do not.

The controller’s office recommends the transit agency work on changing the city transportation code to include fees for traffic control when sponsors apply for permits. It also recommends that it work to recover costs for the Giants and 49ers home games.

The transit agency said it wouldn’t include traffic control fees in permits, because it was not supported by city policymakers who back fairs and festivals.

It will, however,  try to renegotiate the agreements made with the Giants and 49ers.

The Public Press earlier reported that the director of the transportation agency said it is hiring 14 parking control officers to deal with staffing issues. The audit concluded that the lack of officers led to shifts not being covered during the 2010-11 fiscal year.

The controller’s office also said it was hard to determine if staffing levels are are adequate because they have no way of  measuring their effectiveness. The audit said the transit agency needs to use parking citation data for its general enforcement and residential parking permit zones to determine where to deploy officers effectively.

Beat maps used to assign officers throughout the city have not been updated for years. Officers surveyed said the maps did not include the installation of 1,340 parking meters approved by the transit agency in 2010. Without updated maps with parking citation data, areas of the city may not get enough parking enforcement as needed, said the controller’s office report.

View the complete controller’s report on parking enforcement in the city.