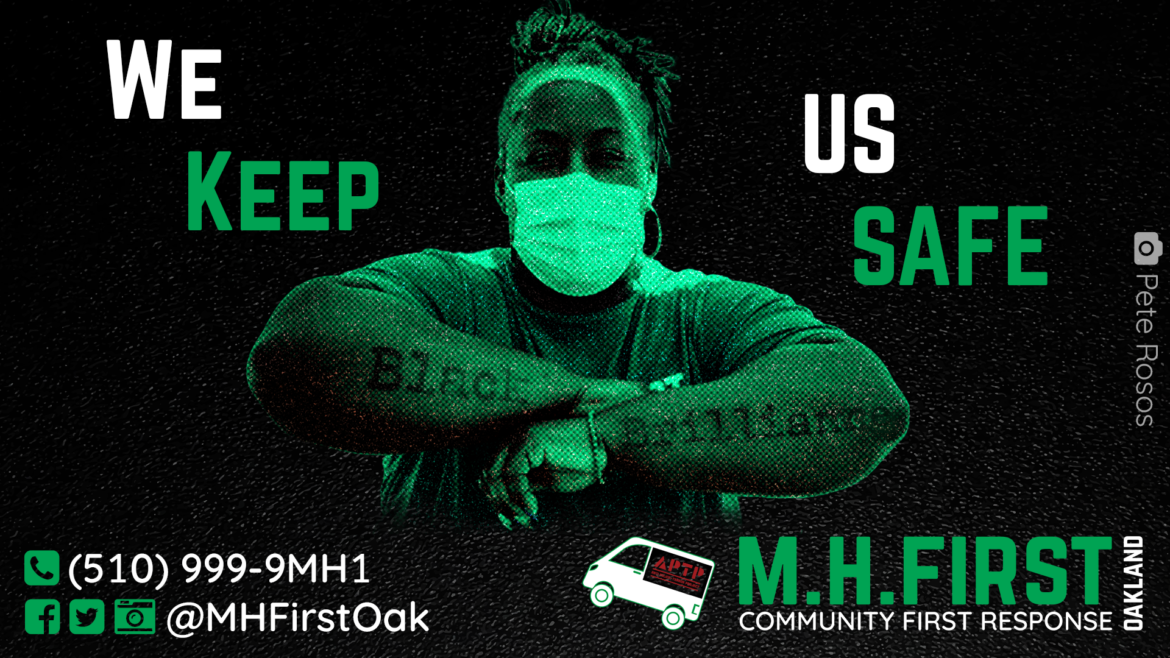 In response to the disproportionate law enforcement violence against people with mental illness and amid ongoing calls to defund or reform police, activists with the Anti Police-Terror Project on Friday night will launch an initiative in Oakland designed to offer an alternative to calling the police in mental health crises. The initiative, called M.H. First Oakland, will begin operations as a hotline with the number (510) 999-9MH1.

People with severe mental illness are 16 times as likely to be killed in encounters with law enforcement as those without, according to a 2015 study from the Treatment Advocacy Center that used government, news media and census data to compile the estimate. One in four  fatal law enforcement encounters involves an individual with mental illness, the study found.

“Law enforcement is trained to neutralize the situation as quickly as they can. And to do that, to force compliance,” said Cat Brooks, executive director of the Justice Teams Network, grassroots activists who are fighting state violence in California, and the co-founder of the Anti Police-Terror Project.

In moments of mental health crisis, she said, “someone showing up with a badge and a gun and barking orders at you, that you literally may not be able to understand or comprehend, isn’t gonna go over very well. And far too often, it gets people severely physically harmed, incarcerated, and worst case scenarios, they end up dead.”

Instead, callers to the M.H. First Oakland hotline can expect to be connected with a responder specially trained to offer support to someone in a mental health or substance use crisis. Brooks said organizers will weigh carefully if, when and how to dispatch responders to the scene of an incident, in order to prevent the spread of coronavirus.

Daniela Kantorová, a psychologist and president of  Psychologists for Social Responsibility who has been working on the Anti Police-Terror Project’s first responders committee since 2014, said calls will be answered by a volunteer on duty, who will have backup volunteers to consult with and help look for applicable resources. The team includes mental health and medical professionals like nurse practitioners or psychiatrists as well as peer counselors.

Protests and calls to defund police departments have renewed nationwide after a Kenosha, Wis. police officer shot Jacob Blake seven times from behind, grievously injuring him. Blake had reportedly been attempting to intervene in a domestic dispute. M.H. First Oakland intends to respond to domestic and intimate partner violence incidents, and is well placed to do so because of volunteers’ connections to the community, Brooks said.

“These are community-based interventions,” Brooks said. That can mean finding safe places for everyone involved to go, but primarily means helping assess a family’s needs. In many cases, she said, “They want to help you figure out how to stay together, and that’s where the partnerships with the counselors and the social workers and the mental health professionals — that’s why those things become so important, that we’re dealing with it holistically.”

The initiative also responds to racial disparities in mental health care exacerbated by the coronavirus pandemic. According to the Substance Abuse and Mental Health Services Administration, while their rates of behavioral health disorders may not significantly differ from the general population, Black and Latino people have substantially lower access to mental health and substance-use treatment.

“There needs to be understanding that it’s not sufficient to think about coming to therapy for 50 minutes a week without also thinking about structural interventions and changes,” Kantorová said. “Because I see a lot of people who come into therapy presenting with trauma, and in my opinion, trauma is very much rooted in white supremacy and capitalism.”