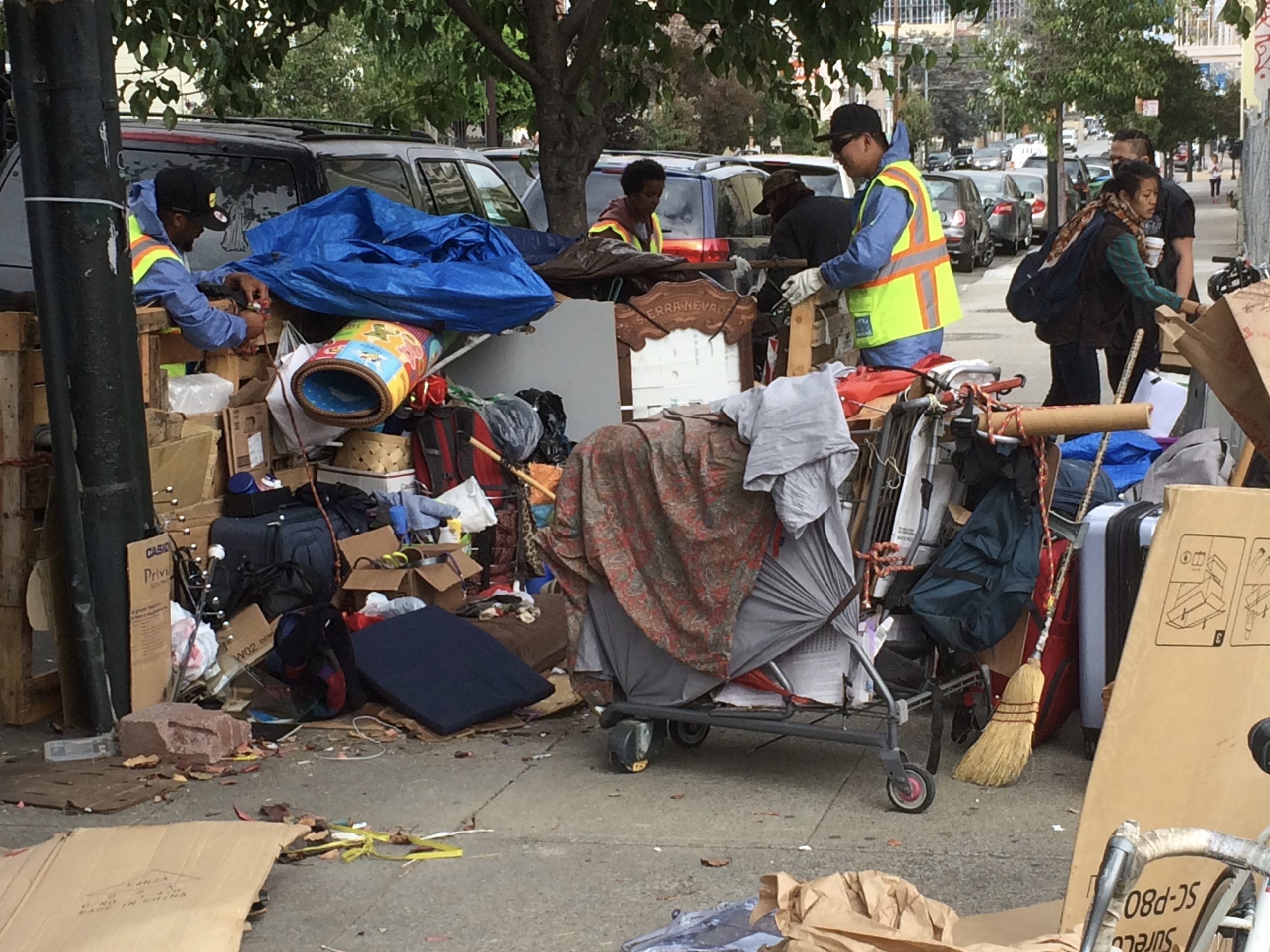 | By Helena Ong, Reporter and

But that law may be a nonstarter, because there is virtually no indoor shelter available to get tent dwellers off city streets.

Proposition Q, which passed 52 percent to 48 percent, requires that before confiscating someone’s tent and belongings, city workers must first give a 24-hour warning and tell that person where to find temporary shelter. If no shelter is immediately available, the tent cannot be taken.

In reality, slots are essentially filled to capacity every day, leaving hundreds out in the cold.

Many articles and op-eds have referred to this problem without thoroughly explaining the crux of it: The city’s shelter system is filled every night by people who have waited in line for either same-day or more permanent beds.

Proposition Q’s authors have said that homeless people may also be shepherded into the city’s supportive-housing units when appropriate. These are homes where someone generally works onsite to provide case management, medical assistance or other services for tenants.

But the supportive-housing system is full, too.

“We’re going to continue our work on addressing the capacity,” said Jess Montejano, legislative aide to Supervisor Mark Farrell and coauthor of Proposition Q. “We claimed from the onset that Q was not a panacea but a tool the city could use.”

On any given night about 7,000 people are homeless in the city, with about 4,000 of them sleeping on the streets, Jeff Kositsky, the city’s director of homelessness, said Tuesday on KQED. The emergency shelter system contains about 1,500 beds.

In conversation with Mission Local in November, Kositsky estimated that 800 homeless people live in tents.

To reserve a bed for 90 days at a time, someone must put his or her name on a waiting list and typically wait weeks behind hundreds of applicants. At the time that this article was published, there were 939 names on the list.

But even when someone gets a shelter bed, that person might not return to the shelter by curfew, leaving the bed empty for the night. Every day about 70 people do not show for their reserved shelter beds, according to a city report published in June, though that number fluctuates daily.
Shelter workers then give those beds to other people for same-night or weekend stays. There is a strong demand for them, and shelter staff reported having to turn people away because slots fill up.

On a typical day, an “estimated four to five” people seeking same-night or weekend stays are turned away from Glide Walk-In Center in the Tenderloin neighborhood, said Robert Avila, director of communications. “It was five last night, for instance.”

Staff at Mission Neighborhood Resource Center also said they might turn away two to three people on some days.

Glide and Mission Neighborhood Resource Center are two of the four locations in San Francisco where people can go to check whether any shelter beds have become available for one-night or weekend stays; the other two locations are United Council of Human Services Resource Center in the Bayview neighborhood and the Multi-Service Center South of St. Vincent de Paul Society in the downtown area. People must make the request in person, at which point staff check a database to see if any beds have become available onsite or elsewhere in the city. If the latter, it is up to the person seeking shelter to figure out how to get to that second location. This can be difficult for people with physical disabilities.

Jennifer Friedenbach, executive director of the Coalition on Homeless, has alleged that because so few same-day shelter beds are generally available, city staff might try to make space for former tent dwellers by setting beds aside for them, making them unavailable to other applicants.
“Logistically, there’s no way to make it work unless you take beds from other people who are trying to get shelter,” she told the Public Press.
Montejano said that City Hall would not take this approach.

But the San Francisco Homeless Outreach Team already does this, pre-reserving some beds for homeless people who might accept their services.

“The vacancy rate would be very low — probably 2 percent, 4 percent,” Quesada said. “And those are the apartments that are waiting for their new tenants. They’re not just sitting idle.”

But unless caseworkers develop rapport with people prior to taking their tents, following the terms of Proposition Q, it is unlikely that supportive housing would be an appropriate next destination for them. Under current practice, city staff thoroughly get to know their homeless clients before placing them in these homes to make sure the housing satisfies their specific needs. But Proposition Q promises — unrealistically — the person will have indoor shelter within 24 hours.

Montejano did not respond directly when asked whether Farrell’s office had pinpointed where tent dwellers displaced under Proposition Q would be housed or how many beds or homes had been allocated for them.

Instead, he said the new law is “functional in limited circumstances now,” and will have wider application later as the shelter system gradually expands. New beds will also be created as part of the city’s third navigation center, where homeless people receive prolonged one-on-one assistance to get off the streets, which is scheduled to open in late February.

Until then, city staff will also probably be hard pressed to find vacant slots in the existing navigation centers. “We have them pretty much full all the time,” Quesada said.

Update 12/12/16: This article was updated to reflect final results from the Nov. 8 election.