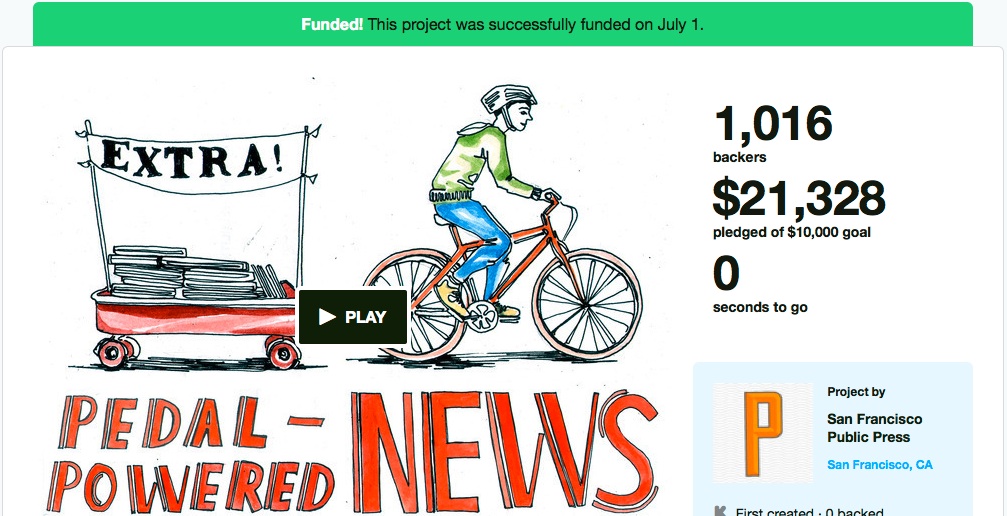 We recently ran a crowdfunding campaign for journalism that brought in three times the amount we were asking for. Here’s how we did it.

The San Francisco Public Press has a plan to increase visibility for the organization and double its San Francisco distribution network in just six months. We’re going to do it by launching a program to deliver our quarterly newspapers by bike instead of car to members, retailers and other distribution locations around the city. Of course, that will take money, so we turned to our community of readers for support.

Our Pedal-Powered News campaign asked for $10,000 to buy bike trailers, hire “newsies” to deliver the papers and print more copies of the newspaper. As an added incentive, the Investigative News Network connected us with the John S. and James L. Knight Foundation, which offered a matching grant of $10,000 if we were able to get 1,000 backers.

Thanks to the support of our network of avid readers and fans of independent journalism, we raised $21,328 from 1,016 backers, thus unlocking the $10,000 matching grant — which means the Pedal-Powered News campaign raised more than $31,000 in all. Publisher Lila LaHood told a group of news managers at an Investigative News Network forum that bicycle delivery had been part of the organization’s long-term vision since it began in 2010.

“Michael Stoll, our executive director, rides his bike everywhere,” LaHood said. “From the very beginning when he came up with the idea of the Public Press, he always had it in his head: Wouldn’t it be fun to deliver this newspaper by bicycle?”

The project capitalized on San Francisco’s love of cycling and allowed the spirit of the Public Press to shine through, LaHood said: “The journalism that we do is very serious, but the personality of our organization is actually charming and quirky. This idea fits in with that.”

“We are delivering serious journalism,” she added, “but I think there’s a way to have a bit of fun with it, and this campaign has some of that spark and charm.”

Executive director Michael Stoll said the campaign was the most successful seasonal pledge drive in the Public Press’ five-year history.

“Kickstarter is a great platform for motivating first-time and returning donors, as well as latent supporters. Especially so since it started promoting its Journalism category the week we launched, spotlighting Pedal-Powered News in its weekly newsletter.

He said the tactic of asking for many small “even $1” donations was disarming, technically easy and motivated donors to pledge more than asked.

“Nearly half our 1,016 donors gave $10 or more. 185 people became new or renewing official members of the organization at or above the $35 level — growing our membership by at least 50 percent in just one month!” he said.

“This was great publicity, attracting interest from a one-million-plus Twitter user, a prominent crowdfunding blog and the local CBS TV news crew, which aired a segment about the campaign on Sunday morning in the Bay Area.”

At INN, LaHood had some advice for journalists who wanted to launch crowdfunding projects: The campaign video took a long time to produce, and not everyone asked to participate in the campaign understood how Kickstarter worked.

She said the personal approach was the most effective and warned that “blasting email lists” did not get results.

“You have to ask again, again and again. People want personal contacts, and somehow Facebook is yielding better responses than email,” LaHood said during the campaign’s final week. “Surprisingly, we were able to raise that basic goal fairly quickly. Getting the additional $1 donations has been challenging.”

The organization spent about $1,650 on art and video production, $150 on technology and $300 on promotional postcards. A big social media push was key to the campaign’s success. The Public Press has the following advice for crowdfunding beginners:

“It takes a while to get set up on Kickstarter,” LaHood said. “Don’t think you can put up your video, put up your text and be ready to go … I would start a couple of weeks ahead of when you actually want to launch it.”

LaHood said more direct training of staff would have been beneficial.

“I thought we had done a good job explaining to everyone in the organization how we needed their help promoting this campaign, but we did not do enough,” she said. “I would do a lot more direct training and explaining to people what they need to do to help.”

A road map for Pedal-Powered News The success of the campaign gives the Public Press an ambitious goal of doubling its San Francisco distribution in six months. The first step is to source the bicycle trailers and hire “newsies” to deliver the summer issue to members and existing distribution locations in late July; then the distribution team will focus on securing additional retail locations for the fall and winter publication cycles.

The campaign itself was an invaluable opportunity to reach more readers and build the organization’s reputation.

Stoll said that even a week on, support was still flowing through the web donation page.

“We have already shown that our donor ‘funnel’ has grown, and we can go back to those same people for more support during our next pledge drive,” he said.

LaHood said: “In terms of a membership campaign, this has been amazing.”

“The campaign itself was great for outreach, and just being able to rally people around the specific event with a time limit really did wonders for us.”

You can still back Pedal-Powered News by becoming a member today.