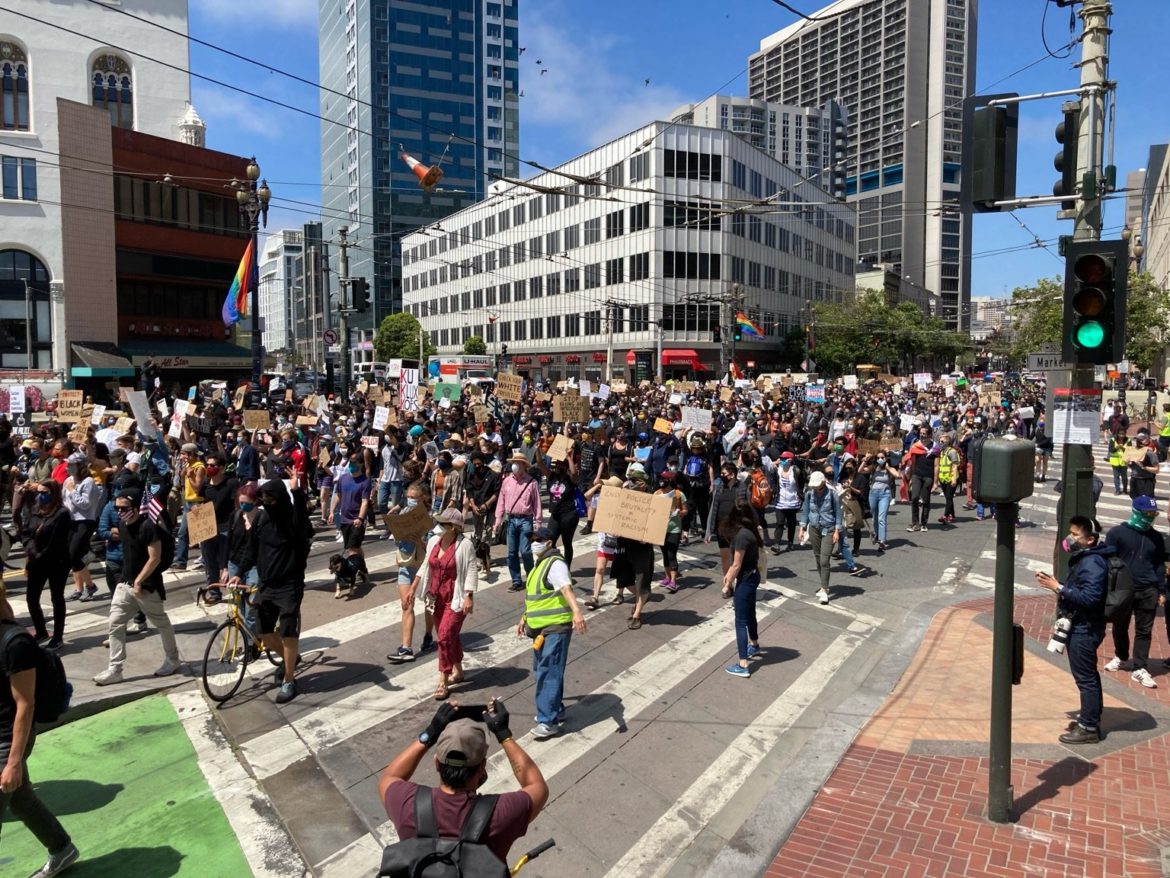 A march for racial justice and against police killings moves down Market Street at Van Ness Avenue on June 19, 2020. Brian Howey / Public Press

Hundreds marched through San Francisco on Friday afternoon to mark Juneteenth, protesting police killings and calling for racial justice. The San Francisco Public Press followed the demonstration, which made its way from the Ferry Building to City Hall and then on to the school district building.

Read updates from the march below, and hear a compilation of reflections from demonstrators in this recent episode of our radio program and podcast, “Civic.”

With some 250 protesters still in front of the school district administrative building on Franklin Street, Indigenous dancers performed a ceremony while protesters sat and knelt. Lexi Hall sang “Lean On Me” with some demonstrators occasionally chiming in for the chorus.

“I think it’s definitely important for the youth to be a voice for the Black Lives Matter movement,” said Hall. “And we all came together, all of the creatives in San Francisco to put on a show and celebrate Juneteenth for the city.”

“I walk down the street and tourists, they clutch their bags. They think I’m hostile… I walk into the corner store and I got people looking at me already, off the bat,” he said. “If enough people come together they can make a change. I think that’s what we’re all trying to do here today.”

Several in the crowd carried large cardboard signs painted to look like dollar bills, with holes cut out where the portrait would be for them to put their heads through. The bills were emblazoned with the text “Defund police, fund Black youth.” Protesters left them on display, leaned against the entryway of the school district building.

Shortly thereafter, by around 4 p.m., the march began to disperse. A few dozen people remained in front of the school district building, dancing.

After marching a short distance along Market Street, the demonstrators turned onto Franklin Street, passing under a massive mural of a baby in a police uniform holding a gun, painted by artist BiP to protest police brutality.

Protesters then paused at 555 Franklin St., headquarters of the San Francisco Unified School District. An organizer said this stop symbolizes the desire to shift funding from the police department to the school system.

After speakers concluded their remarks to the demonstration, the march began moving again, headed from Civic Center along Polk Street toward Market.

Cahrell, Camille, Jaeden, Gugu, Star and Juelz Baclay were at the march specifically to celebrate Juneteenth, a day commemorating the end of slavery in the U.S.

“I’m born and raised in San Francisco and we used to celebrate Juneteenth all the time in the Fillmore. And now that’s gone,” said Star Baclay. “I’m hoping everyone who has the day off can learn and research what exactly this day means.”

Ilaha Omar, from Afghanistan, carried a sign that read in Dari, “Solidarity with Black people makes the world a better place.”
Since a Minneapolis police officer killed George Floyd on May 25, Omar has attended eight protests including today’s. She said she hoped to see more investment in Black communities, particularly to benefit youth, education and businesses.

“I’m gonna show up until I see something change,” Omar said.

“Juneteenth is my Independence Day as a Black woman,” said Aubree Haggans.

She and Obadiah Watkins had brought a cart full of registration forms to the demonstration in front of City Hall, hoping people would take the opportunity to register to vote.

“We just really wanted to do something that would effect some sort of change. It’s really overwhelming with so many issues that are plaguing our community and the world right now. So how do we really effect that change?” Watkins said. “That change will be made by making sure that we vote and everyone is registered to vote and making a difference in the right way.”

“I think both of us were sitting at home really overwhelmed and overstimulated from the situation wondering what we can do and I’m sure that there’s tons of people out there wondering the same,” Haggans said, adding: “Voting. Voting is how we can make the difference.”

Speakers have been addressing the crowd gathered in front of City Hall from a truck fitted with a speaker system. Gwen Woods, whose son Mario Woods was shot and killed by San Francisco Police officers in 2015, was among them.

“Don’t let this be a moment. Let it be a movement,” Woods said. “All lives do matter, but they don’t matter until Black lives matter.”

The march that began at the Ferry Building has now joined a group already gathered at Civic Center, bringing the number of demonstrators to some 500 people.

Vivienne and Ken Gaskins were among the demonstrators marching down Market Street. They said they expected for the momentum of these protests, which have continued for weeks, to carry on.

“I think it’s going to keep happening, maybe up until November — at least,” said Vivienne Gaskins.

She called Juneteenth “a proud holiday that, even though we don’t have the exact date, it’s still very important to us.”

Ken Gaskins said racism, in his childhood, wasn’t much discussed.

“As a child we really didn’t learn about this,” he said. “I think that my folks from the South really didn’t want to discuss a lot of it.”

Hundreds are marching down Market Street toward City Hall, carrying signs that read “Black Lives Matter” and chanting the names of people killed by police officers, including Breonna Taylor. Police officers in Louisville shot and killed Taylor, a 25-year-old emergency medical worker, after breaking into her home with a battering ram.

More than 100 protesters have arrived at a staging area for a march to City Hall at the Ferry Building in San Francisco. Among their first actions was to kneel in silence for a minute in a brief memorial for people killed by police officers.

“We are going to defund the police and invest in our Black communities,” said organizer Fernando Lorenzo, addressing the crowd through a portable speaker. Lorenzo announced demands for police reform, including developing an independent civilian inspector body to investigate police misconduct, establishing stricter standards for police use of force training, and ending the use of private, for-profit prisons.

Brian Howey is the field reporter for this story. Laura Wenus compiled the live reporting.

Correction: An earlier version of this story misidentified Fernando Lorenzo as Santasia Foster, a different speaker.

Brian Howey is a staff reporter at the San Francisco Public Press. He can be reached at BHowey@sfpublicpress.org. For encrypted email, write to Brianwhowey@protonmail.com. Follow him on Twitter: @SteelandBallast.