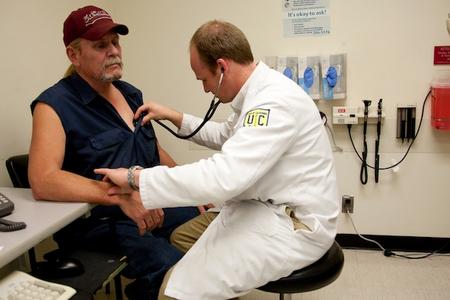 Local, state officials must develop new models for care by 2014

This story appears in the Spring 2012 print edition of the San Francisco Public Press.

San Francisco’s experiment in universal health care, which grew over the last five years to cover an estimated 85 percent of the city’s uninsured, may need to partly return to its origin as a network of safety net clinics and hospitals for the poor as national reforms syphon off middle-class patients.

Healthy San Francisco, the universal health care program that now provides medical services to more than 50,000 city residents, has received praise as a national model for offering inexpensive access to higher-income residents who lack insurance, and the longer-term promise of cost containment.

But the program could take a financial blow within the next two years as cities and counties adapt to national health reform. While thousands will get insurance, the federal law leaves some of the most vulnerable populations exposed and in need of care. Because fees are means-tested, that will reduce the income Healthy San Francisco earns from the patients themselves.

Nearly 70,000 city residents will remain uninsured after federal reform, according to a 2011 report by the San Francisco Health Reform Task Force. In California, that figure is estimated at 3.1 million. Nationally, 23.3 million people will not have insurance.

Lawmakers who passed Healthy San Francisco in 2007 now criticize the Affordable Care Act, saying it leaves out huge swaths of the population — largely undocumented immigrants, prisoners and those with very low income.

The city is already struggling to pay for universal health care. Healthy San Franciscopays $114 per patient, per visit, to medical clinics. But a dozen medical directors from the city’s 35 clinics interviewed last fall said they were shouldering the burden of uninsured patients. On average, a doctor visit costs individual clinics roughly $300 per patient, and  patients typically make three visits a year. Some clinics say this cost requires them to turn patients away.

User fees, federal grants and a special requirement on businesses that brings in payments for each employee, 2010 city data show, brought in $78 million, less than half the $178 million total cost of the program. The balance comes from the city’s General Fund.

But as of 2014, patient fees and business contributions will be eliminated, as residents become eligible for Medical or for the purchase of insurance through state health exchanges as called for by federal law. Further threatening Healthy San Francisco, federal grants that currently help pay for local initiatives will be diverted from counties to fund the Affordable Care Act.

Lt. Gov. Gavin Newsom, who as San Francisco’s mayor signed Healthy San Francisco into law in 2007, said it is devastating that immigrants, prisoners and the very poor will fall through the cracks as federal funding for safety-net providers is stripped.

As patients who use Healthy San Francisco move to the national program, San Francisco’s system starts to look more like a safety-net model. Yet, while medical experts and politicians say the city is unusually dedicated to caring for the needy, it could lose political support in the long run if middle-class users exit the program. As the “universal” moniker falls apart, the program could be more vulnerable to future budget cuts, say officials who have championed the program.

‘Health care is a right’

Under federal reform, Healthy San Francisco would primarily serve populations who regularly “get thrown under the bus,” said state Assemblyman Tom Ammiano, an original author of the program.

“Health care is a right, not a privilege,” Ammiano said. “The way we see it, Healthy San Francisco can pick up who Obama’s plan leaves behind.”

Newsom said the issue is urgent and policymakers need to start planning now for how to care for those left out by the Affordable Care Act.

“The reality is that there are millions of Americans who will fall through the cracks when health reform is implemented federally,” Newsom said. “It’s a legitimate question to ask how we’re going to keep paying for the program. No doubt it’s going to change who we cover.”

“Dollars are going to be taken away from cities like San Franciscoand Los Angelesto pay for the Affordable Care Act,” he added. “So there’ll be less money to pay for the indigent and undocumented.”

Kim Belshe, a senior health policy advisor for the Public Policy Institute of California who studies access, quality and cost, said counties like San Francisco will be left to figure out how to care for the uninsured not covered nationally.

“The Affordable Care Act is near-universal coverage, so moving towards 2014, the question becomes how do we care for these underserved populations who are left out?” Belshe said. “What we need to ask is what’s the size and profile of who Healthy San Francisco serves today? How many will remain outside the provisions of the Affordable Care Act? And who will become responsible for providing and funding their care?”

Newsom said Healthy San Francisco is safe politically, even as the city struggles to pay for itself, and has successfully fended off attacks in court by restaurant groups. The hope is that the program will morph into a safety-net model that other municipalities can look to for lessons.

The program works largely because of San Francisco’s unique character. Its management is simplified by being both a city and county. Politicians are mostly socially progressive and assisted by special-interest groups that rallied together in support.

Labor unions supported the program in 2007, along with the Chamber of Commerce, local hospitals and small business, officials said.

But the city’s key advantage was the existing safety-net infrastructure, which permitted economies of scale after they were networked together. One of Healthy San Francisco’s innovations is the “medical home” concept, in which patients are sent to one location for all their primary care concerns and referrals to specialists. Studies indicate that medical homes lead to more preventive care and lower costs overall.

Tangerine Brigham, director of Healthy San Francisco, a program of the Department of Public Health, said that despite financial challenges, the program remains vital.

As of Jan. 1, the program provides access to care for nearly 46,000 San Francisco residents.

The General Fund allocation in the last fiscal year was $99.7 million, a sum the city can afford because it is similar to what the city was spending previously on charity care.

But as counties lose federal government funding, San Francisco’s safety net could be at risk.

“We’ve said since the beginning, that insurance is preferable to Healthy San Francisco,” Brigham said. “But we will always have the program — our city has made a commitment to that.”

Brigham estimated that 40 percent of San Francisco’s population will be left out of federal health care incentives, and she said San Franciscois dedicated to serving their needs.

“We believe that access to health care will continue to be an important issue for individuals irrespective of income status, immigration status or unemployment status,” she said.