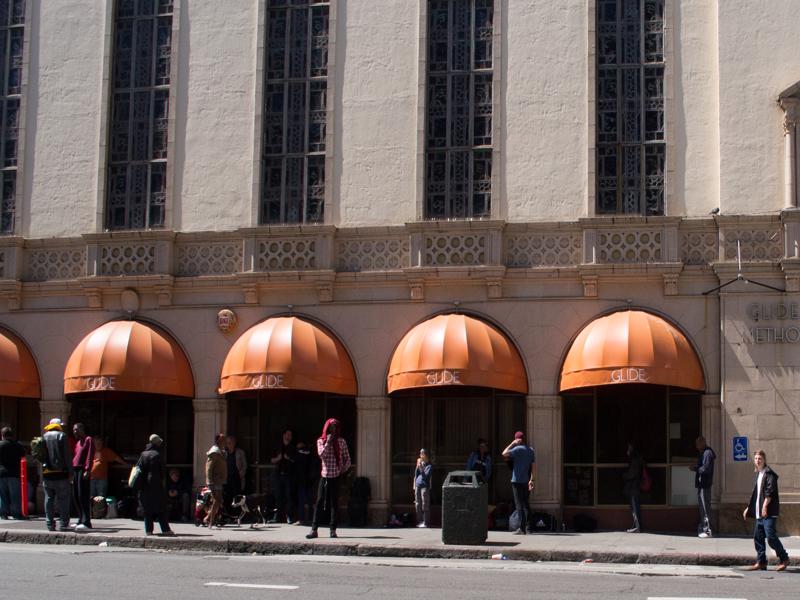 People wait in line for a shelter bed at Glide Memorial Church at Ellis and Taylor streets in the Tenderloin neighborhood on June 12, 2017. Sara Bloomberg / San Francisco Public Press

San Francisco turned down a research startup’s offer to test all of the city’s homeless shelter residents for COVID-19, urging the firm to divert its resources to other populations, according to interviews, emails and documents outlining the proposal.

Color, a Burlingame genetic research company, was set to start testing residents at two homeless shelters on April 22. Shelter leaders and organizers had lined up doctors and volunteers to perform the testing, which Color claimed it could complete for San Francisco’s entire shelter population in 12 days. The company had drafted a letter of understanding, which the Public Press reviewed, outlining the plans. Then representatives from the company stopped replying to calls and emails from the administrators and advocates.

A Color representative emailed one of those contacts on April 28 to say that after discussions with the health department, the company had shifted its focus to higher priority populations, such as nursing homes, in order to follow health department directives.

Shelter administrators and activists are frustrated by the sudden change, especially given the risk that residents of homeless shelters can spread the coronavirus at high rates even when they are asymptomatic.

“I still have participants and staff asking me when this is going to happen,” said Kathy Marsala, program director at Hamilton Families, a family shelter that was slated to receive testing. “When my staff ask me, ‘When are we getting tested?’ I feel like I’m giving them the runaround.”

The city is working with Color and other private providers to continue opening new testing sites and to protect priority populations, including those in shelters, said health department representative Jenna Lane. She declined to confirm whether the department had been in contact with Color about the shelter testing initiative or if shelter residents would be tested at a future date.

A representative from Color said the company had partnered with the city to test all adults and essential workers exhibiting coronavirus symptoms and directed further questions to the Department of Emergency Management. The representative did not mention the initiative to test shelter residents.

Representatives from emergency management did not respond to requests for clarification before press time.

Addressing spread of coronavirus in shelters

The health department and the Department of Homelessness and Supportive Housing thinned populations in all city shelters by moving residents over the age of 60 or with underlying health conditions into hotel rooms after a COVID-19 outbreak at the Multi-Service Center South shelter that began April 6.

Initiatives that tested the entire populations of homeless shelters in San Francisco, Chicago and Boston have shown that many — or all, in the case of Multi-Service Center South — of the shelter residents and staff who tested positive for coronavirus showed either mild symptoms or none at all.

In the wake of these findings, local advocates for the homeless have voiced concerns that the virus could be far more prevalent among shelter residents than indicated by current testing policies, and that the city is not taking necessary measures to prevent the spread of the virus among those remaining in the city’s shelter system.

Coalition on Homelessness workers were excited when Daniel DeSloover, a developer at Color, reached out to the coalition on April 17 to discuss the possibility of testing homeless shelter residents, said coalition director Jennifer Friedenbach.

“They basically were like, ‘We’ve got tens of thousands of tests,’ and they were only using a few hundred of them,” Friedenbach said. Color representatives indicated to coalition workers that they had reached out to the health department about testing shelter residents, but the department “wasn’t moving on doing the testing,” she said.

Color and Carbon Health, a San Francisco health clinic operator, made plans with coalition workers and administrators from Hamilton Families, a family homeless shelter where a resident tested positive for coronavirus this month, to test the remaining residents at that shelter, including 41 children, 31 adults and 26 staff.

Color and coalition workers also discussed via email testing residents at homeless encampments and residents and staff at the Division Circle Navigation Center. Friedenbach contacted Shari Wooldridge, executive director at the St. Vincent De Paul Society, the group that runs the center, to discuss the possibility of doing the same there, said Friedenbach and Wooldridge.

Dr. Colette Auerswald, an associate professor at the UC Berkeley School of Public Health, agreed to be the ordering physician for the initiative, meaning she would order the tests administered at the shelter, as long as certain conditions were met, she said. First was that the two companies and other involved parties coordinate with the health department to meet guidelines on notifying shelter residents and staff of their rights related to the tests. She also insisted test results be reported to the health department, those who tested positive be transferred into the department’s care and that the initiative include an adequate number of staffers qualified to administer the tests, Auerswald said.

“I was determined that people not just get tested willy nilly,” she said, noting her commitment to getting the health department’s blessing. Negotiations involving the tests continued through April 22, when testing at Hamilton Families was initially scheduled to begin, according to a letter of understanding drafted by Color and shared with those organizing the tests and those involved in the negotiations.

The cost of the tests would have been billed to the Coalition on Homelessness at $75 per test, according to the letter of intent. Volunteers from the Do No Harm Coalition, including UCSF doctoral candidate Olivia Park, agreed to help facilitate the tests, Park confirmed.

“We were going above and beyond to surpass the city’s requirements,” said Chris Herring, a sociology Ph.D. candidate at UC Berkeley and an adviser at the coalition. “We worked frantically through the weekend to get this going as quickly as we could.”

During early communications between Color and other parties, DeSloover pushed to clear logistical hurdles as quickly as possible in order to start testing, Herring said. “They were very clear that they were ready to do this.” In one email, DeSloover wrote that he wanted to meet with Auerswald to work out final details of the initiative and “get in the field ASAP” to start testing.

But communications between DeSloover and the other parties ceased after April 23, and coalition workers didn’t hear back from Color for nearly a week. On April 28, DeSloover sent an email to the coalition stating that plans had changed and testing in the shelters had been put on hold.

“I understand your desire to get this moving quickly, and we are all juggling many urgent requests,” DeSloover said in the email.

Advocates for the homeless said they were surprised and dismayed by the news.

“We kind of got iced out of the whole thing,” Friedenbach said in a phone interview, adding that while testing other populations is “really important,” the coalition’s priority is to ensure “preventive testing in these locations where you have large numbers of people sleeping in crowded conditions.”

Marsala of Hamilton Families shared a memorandum of understanding she signed April 21 between the shelter and the coalition agreeing to provide notification to shelter residents of the upcoming tests. On April 28, Marsala said she had not heard back from Color about the tests.

“It would be nice to know what’s going on because this is a serious matter,” Marsala said. “The offer was there to do this and I think there should’ve been a follow-through. It’s really unfair to offer something and then to leave folks unaware of what’s happening.”

The city is in “active conversations” with Color and Carbon Health about “expanding testing in line with our City priorities in this pandemic,” Lane of the health department said in an email. “Protecting vulnerable populations – especially people in congregate settings like long-term care facilities and shelters – is one of those top priorities.” Lane said she could not clarify whether the department had discussed plans by Color representatives to perform mass testing in city shelters.

In a presentation to the Board of Supervisors Tuesday, Dr. Susan Philip, director of disease prevention and control at the health department, said that from March 2 to April 26, 15,610 San Franciscans were tested for COVID-19, with 11% testing positive.

The city has the capacity to analyze 4,300 samples per day, and Color’s labs were able to analyze an additional 1,500 samples daily, but access to certain testing supplies, such as swabs, had been “very unsteady” until last week, she added. “We are competing against every other health department, every other state to get these tests,” Philip said.

The health department’s priority is to “protect those who are most vulnerable of sickness themselves” and to mitigate outbreaks, she said, adding that while the city has engaged in mass testing in shelters where outbreaks have occurred, there are “no national guidelines for testing in congregate settings.”

Last week, the federal Centers for Disease Control and Prevention stressed the need for broad testing procedures in homeless shelters after a study conducted in March and early April by the agency found the virus to be surprisingly widespread among shelter staff and residents in several major American cities, including San Francisco.

Supervisor Matt Haney, who represents the Tenderloin, where a number of shelters are located, released a statement Wednesday urging the health department to expand testing to all of those living in congregate settings, including homeless shelters, in response to Philip’s presentation.

“We cannot even begin to identify those who are infected if we are not doing more testing, especially in high-risk populations,” Haney said in the release.

Any San Francisco resident experiencing one of several coronavirus symptoms can get tested at one of several testing sites around the city. More information here.