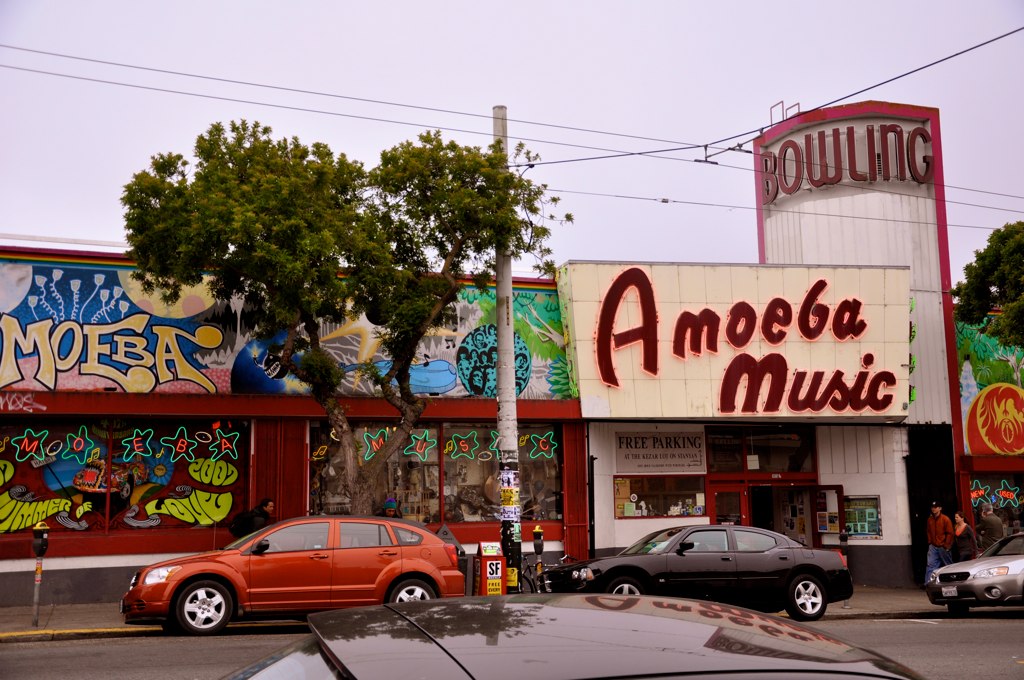 Amoeba Music in the Haight Ashbury neighborhood was one of the plaintiffs in a lawsuit against San Francisco over a sanctioned homeless encampment. Sarah Nichols / CC BY-SA 2.0

After backlash from neighbors, activists and others, several Haight-Ashbury businesses plan to drop a federal lawsuit against San Francisco for its placement of an approved homeless encampment at Haight and Stanyan streets.

The plaintiffs plan to withdraw the suit Monday or Tuesday, Joe Goldmark, the partner-manager of record vendor Amoeba Music’s Haight-Ashbury location, said by phone Monday morning. In addition to Amoeba, plaintiffs include Escape From New York Pizza and the Concerned Citizens of the Haight, a newly formed neighborhood association.

A statement from the Concerned Citizens noted that members of the group “still have health and safety concerns, and believe that there are more appropriate sites than directly adjacent to a residential/commercial neighborhood and opposite a preschool. We hope that the City will honor their commitment to use this site for 3-6 months only.”

“We’re moving on, and I don’t have any further comments at this time,” Goldmark said.

Goldmark and his fellow plaintiffs sued in late May after the city announced plans to place a socially distanced camp of about 40 tents for unhoused Haight residents in a parking lot next door to the record store.

Plaintiffs complained that the site would not provide proper hygiene facilities or follow federal Centers for Disease Control and Prevention guidelines for sanctioned encampments, thereby compromising the health and safety of camp residents and neighbors.

The lawsuit gained notoriety when the plaintiffs hired Harmeet Dhillon, a San Francisco attorney and vocal Donald Trump supporter, to argue their case. The plaintiffs quickly severed ties with Dhillon after some residents took to Twitter to denounce the choice of representation.

“Mistakes were made,” Amoeba wrote May 29 on the store’s Twitter page. “A lawyer was recommended to us and in haste we took the recommendation without a thorough vetting. Harmeet Dhillon’s politics are obviously not in line with Amoeba Music’s beliefs and vision, and we have therefore parted ways.”

The choice to hire Dhillon damaged relations between owners at Amoeba and Escape From New York, said Timothy Parker, the pizza parlor’s co-owner and manager. “We had very little say in this to begin with and no say on who the lawyer is at all,” Parker said.

In the 1990s, Parker used to busk on Haight Street and used services at nonprofit outreach groups similar to those running the encampment, he said, adding that he has offered to donate pizza to camp residents and that his issue was never with the encampment itself, but with the limited warning from the city of its location and the lack of community input in the decision-making process.

“It’s a done deal; it’s here,” Parker said of the camp. “Our priority is to support the community and right now, it means supporting that site.”

Supervisor Dean Preston, whose district includes the Haight-Ashbury, called the end to the lawsuit “welcome news.” He added, “We look forward to working with everyone to make sure the site’s a success and are happy to hear from folks who are supportive or have concerns.”

Jennifer Friedenbach, director of the Coalition on Homelessness, called the suit “mean-spirited and misdirected” and was happy to hear the group was dropping it.

“I kind of feel like Amoeba lost their punk cred through all this,” she said. “We’re trying to get people into hotel rooms; the city’s not moving fast enough. In the meantime, we need a way to keep our unhoused neighbors safe.”

Representatives of the Department of Homelessness and Supportive Housing did not reply to a request for comment on the lawsuit in time for publication.

The Haight-Ashbury camp is one of three such sites opened by the city in recent weeks, the third of which opened at Everett Middle School in the Castro this week.

The camps have been a source of tension among department leaders, supervisors and advocates for the homeless in recent weeks. The Board of Supervisors has repeatedly called for the city to place more unhoused people in hotel rooms as the mayor and city department heads stand firm in their decision not to fulfill those demands, citing costs and logistical hurdles.

The city’s focus on the sanctioned camp sites is a telling signal of its preference for cleaner, socially distanced and fully serviced versions of the tent camps that have been growing in neighborhoods like the Tenderloin. Since the city’s coronavirus precautions began emptying homeless shelters, many former shelter residents have been forced back onto the streets, resulting in an increase in encampments.

As of June 5 there were 415 tents in the Tenderloin, the Chronicle reported, a 150-tent increase from a month earlier, when Mayor London Breed announced an ambitious plan to clean up that neighborhood and assist its unhoused residents to find healthier accommodations.

Last week, the Recreation and Parks Department and the city’s Real Estate Division created a list of 42 potential sites for more sanctioned camps around the city, most of them parking lots. The city’s interest in parking lots over parks may stem from U.S. Senator Dianne Feinstein’s letter to Board of Supervisors President Norman Yee discouraging the use of public parks — particularly Golden Gate Park — for sanctioned camps.