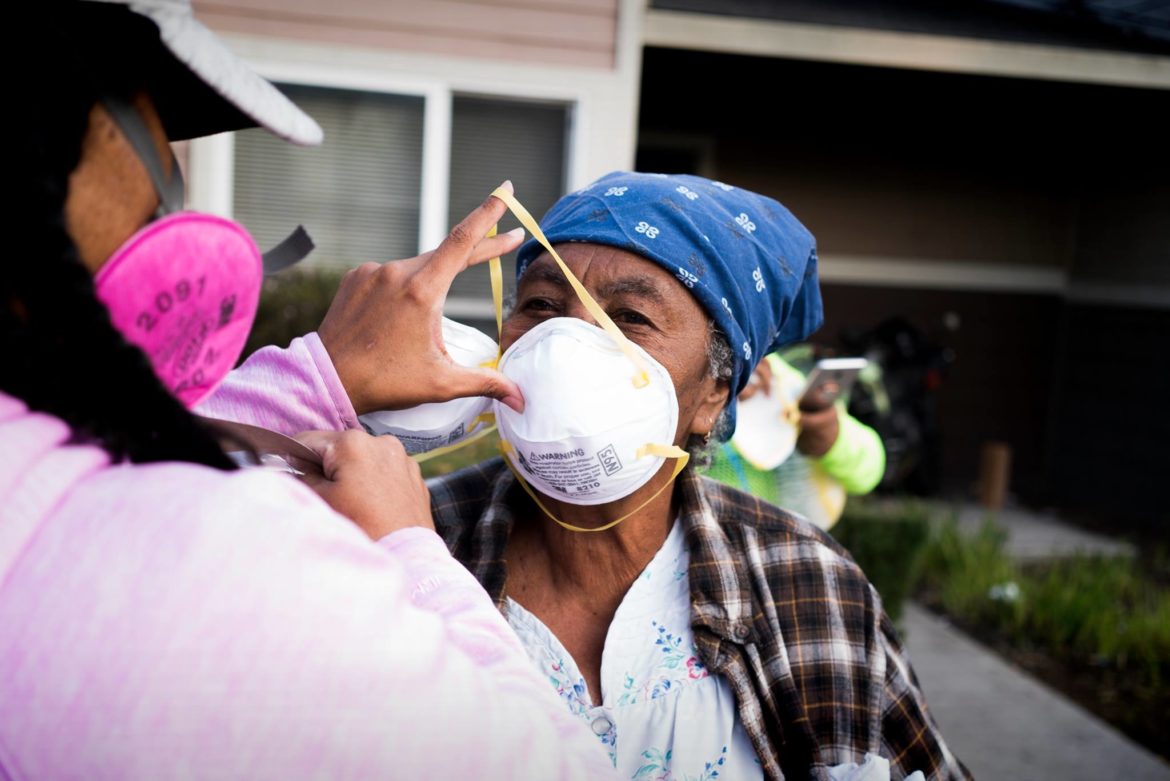 A volunteer places places an N95 mask on a woman. Courtesy Mask Oakland

The last few years’ fires are all blurring into one for Jessica Tovar, an Oakland resident and advocate at the nonprofit Local Clean Energy Alliance, a renewable energy advocacy group.

“I had an office that you could see the port of Oakland from, and in those times, you could not see the port because the smoke was so thick,” she said. Oakland was among the worst-hit cities when smoke from the 2017 Tubbs wildfires spread to the areas around San Francisco Bay, lowering air quality to levels comparable to Beijing, some of the worst in the world.

As California’s fall wildfire season approaches, mask shortages mean Oakland residents are at risk of exposure to both coronavirus and to toxic smoke. Tovar, who frequently interacts with underserved Oakland residents, echoed the concerns of advocacy organizations that distribute masks. They warn that groups in Oakland often left without access to protective masks — people with respiratory conditions, non-English speaking households and homeless residents — could face dangerous levels of air pollution.

“We’re dealing with multiple crises that require a specific thing in order to survive or not become ill,” said Tovar. “And the access to that is pretty much zero at this point.”

The Bay Area Air Quality Management District did not dispute that N95 masks are in short supply, but argued that they don’t provide effective protection for the general public from wildfire smoke. Other government agencies say N95s, which filter harmful particles from wildfire smoke, should be adopted under certain circumstances. For example, the state Occupational Safety and Health Occupational Standards Board proposed a rule in April requiring employers to provide outdoor workers with N95s in the case of wildfires.

Rising prices and demand could create substantial hurdles to getting masks in the hands of unsheltered local residents.

N95 masks are the protection of choice for many groups because they are capable of filtering out dangerous small particles in wildfire smoke known as PM 2.5, which are fine enough that human lungs absorb them along with oxygen. Those properties also make N95s effective against COVID-19, leading to a surge in demand for N95s earlier this year.

The masks have been a standard item issued by local governments and nonprofits for several years. In 2018, Oakland gave out 1,400 N95 masks that were donated by a construction company, while Health Care for the Homeless distributed 5,500 to encampments through partners including Mask Oakland. Mask Oakland, a nonprofit founded in response to the 2017 wildfires, distributed more than 100,000 N95s to fire zones across Northern California that year.

“I am not sure yet what we will be able to do this year given the focus on having N95 masks available for front line COVID response services workers,” said Lara Tannenbaum, a Human Services Department manager at Oakland city government.

Mask Oakland donated thousands of masks to public health agencies in this March when COVID-19 strained local hospital supplies of personal protective equipment. Now, as fire season approaches, the group is carrying out an inventory of its supplies and putting out calls for donations. Mask Oakland is also speaking to suppliers about how to get more masks.

N95s the organization had previously been able to buy for 50 cents now sell for $2 to $3 apiece due to COVID-19 demands, said co-founder Quinn Redwoods. “I’m a little bit in denial about how to operate.”

Impact on the most vulnerable

As fire season approaches, Redwoods is also concerned about what the effects will be for Oakland residents — including essential workers, low-income groups and particularly homeless individuals — without access to N95s. “The longer you’re outside, the longer you’re exposed to smoke during a fire and the more total exposure you have, and so of course, that means houseless and curbside communities,” said Redwoods, referring to people who sleep in vehicles or other non-fixed homes but who are not always counted among the homeless.

The number of people in need is on the rise. Homelessness was already soaring in Oakland before COVID-19 arrived. In 2019, a single-night street count found that homelessness had increased by 47% in the city compared with two years earlier. The same count found that 70% of homeless residents were Black, and a quarter had chronic health conditions.

Exposure to long periods or high volumes of smoke can lead to fatal asthma attacks for people who already have respiratory conditions, or to heart failure for people with underlying circulatory problems, according to the U.S. Environmental Protection Agency. Even for healthy adults, prolonged exposure can lead to respiratory or cardiac conditions later in life.

“If cities want to say that Black Lives Matter and paint things on their streets and on their walls,” said Redwoods, “they also need to understand that part of life is health, and Black health matters.”