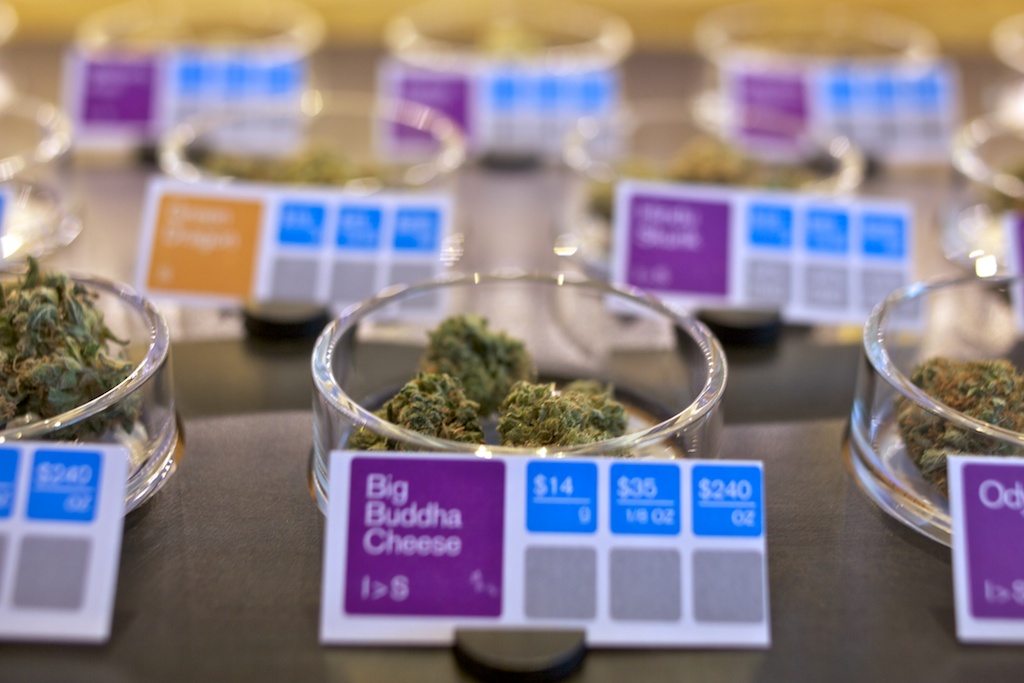 An assortment of creatively named products, like “So Gouda” and “Odyssey,” are showcased behind glass display cases. Photo by Monica Jensen/SF Public Press.

The San Francisco Patient and Resource Center in the South of Market area resembles an art gallery where customers in sports coats and skirts suck THC vapors from plastic balloons and feast on cannabis-laced caramels.

The medical cannabis dispensary at 1256 Mission St. was designed by Larissa Sand of Sand Studios in the South Park neighborhood with the intention of luring new customers in this evolving area, which includes the new Federal Building just two blocks away.

The most striking design element of the center is the blue-and-gray, modern, stained-glass window inspired by Twin Peaks in the Castro, one of the first gay bars to not have blacked-out windows. The blue panels are transparent, inviting the public to peer in.

“While patient privacy is a concern,” SPARC attorney David Owen said in an e-mail, “SPARC was designed with the same notion of openness in mind … removing the stigma and the ‘dark alley’ feeling.”

Owen said the window’s design represents segments of the genetic map of the cannabis plant.

Nicholas Smilgys, the center’s marketing director, said the reaction to the dispensary’s more open and modern design has been positive. He said it seems to have attracted more women who come in alone.

Wayne Justmann, a San Francisco medical cannabis activist, agreed that the center has created a more customer-friendly environment. Many San Francisco dispensaries are plain storefronts with a small service counter. The Re-Leaf Herbal Center next to the resource center has iron bars on its entrance door and windows.

“From the front door to the urinal,” Justman said, SPARC “has the most modern washroom that I have ever seen. They are creating a very patient-friendly environment.”

The forward-looking center has ties to several establishments that fit the progressive model. J. Erich Pearson, the center’s executive director, is also affiliated with CannBe, a for-profit marijuana consulting and lobbying firm. He also is a co-founder of the San Francisco Cannabis Collective and serves on the city’s new Medical Cannabis Task Force.

Oakland’s Harborside Health Center may be the model for the center. Steve DeAngelo, Harborside’s chief executive officer, works with Pearson at CannBe. The New York Times noted that Harborside’s corporate features, including its modern motif, yoga classes and chiropractic services, are giving new credibility to the marijuana business.

“I think that SPARC is really going to bring a completely new model to San Francisco,” DeAngelo said.

Kevin Reed, 36, runs San Francisco’s Green Cross dispensary on the lower floor of his home. He said he worries about bigger dispensaries coming to town. “What I see opening now are the superstores coming in,” Reed said. “The Wal-Mart industry of ‘Big Pot’ is coming in to take over your city. And they’re going to come in, and they’re gonna lowball prices, put all the small guys out of business, then jack prices up, and they’re gonna be your daddy.”

Cannabis dispensaries in California may operate only as nonprofits. Dispensaries like Harborside and the new resource center are well prepared to prove their nonprofit commitment by channeling their cannabis revenue into wellness classes and other services, DeAngelo said.

By becoming members of the resource center, patients also fund advocacy work for improved marijuana access. They also get exclusive access to a variety of services in addition to cannabis products, including cooking classes, art therapy and meditation sessions.

At the resource center, the wood counters, constructed with salvaged, old-growth oak, were lined with customers asking questions about the different strains on display in the well-lit glass case. Display samples were housed in clear petri dishes with colorful cards detailing the cost, potential effects and the levels of THC, or tetrahydrocannabinol, the active chemical compound in the cannabis plant.

Flat screen monitors display the strains and tout special prices. Cannabis supplies are stored behind the counter in wooden apothecary drawers, giving a bit of old-world charm to the modern area.

The group plans eventually to test the drug levels of its strains of cannabis, which are grown by the center’s collective in the Bay Area, and edibles, currently supplied by an outside vendor.

Smilgys said he thought medical cannabis treats were extremely strong across the board.

“We are going to ratchet it down so it’s not unbearable for the average person to use,” he said. ”We did empirical testing with our employees on all the edibles to make sure they were acceptable for us to sell here.”

One other interesting plus for the dispensary is its entertainment license. It could be the first true pot club in the city.

Jeffery Pagalion walked out onto Mission Street from the resource center with a bag of cannabis that he said he uses to treat stress. The 20-something said the club is very attractive.

As with many businesses aimed at higher-end clientele, he said, beauty sometimes is skin deep.

“It’s not one of my favorite spaces, but it is a place I’d like to buy [from] once in a while depending on what type of medicine they have available,” Pagalion said.

He said the Love Shack and the Green Door were his favorite dispensaries.

In the end, Smilgys said, the resource center wants to make medical cannabis a legitimate business.

“We’re transparent — we’re a true nonprofit,” he said. The group operates as a mutual benefit corporation organized under California’s Corporations Code, and pays state and federal taxes, he said. “We want to create real change and let people see that this doesn’t have to be an industry as it was in the past.”

Correction: David Owen was identified in the story as founder. He is an attorney representing the dispensary. The story has been changed.

Like most of the reporters my age, I came to reporting via "All the President's Men." I've alway been naturally curious. Lately, I have been focusing my reporting time on the area of medical cannabis and human trafficking.