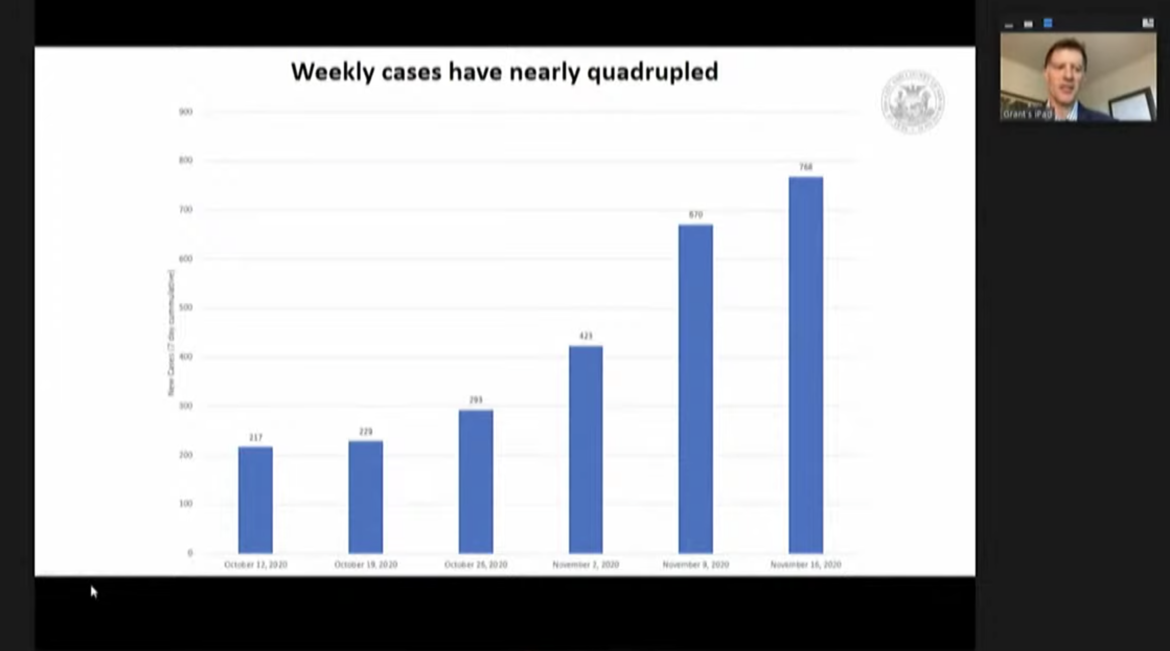 The number of new COVID-19 cases in the city has quadrupled since Oct. 12 amid the city’s worst surge in infections since the pandemic began, San Francisco Department of Public Health Director Dr. Grant Colfax announced Friday afternoon.

San Francisco is in the state’s red tier, the third least restrictive, after being in the lowest yellow tier just three weeks ago. Colfax said that could change quickly. “Our current case rate places us on the trajectory to potentially be in the purple tier as early as Sunday,” he said, alluding to the state’s most restrictive level. If so, San Francisco could join 41 other counties across the state in the tier.

Colfax said that would require a number of rollbacks to comply with the state’s orders. “Closing indoor gyms, indoor museums and movie theaters, and houses of worship. We will also have to further limit capacities in retail outlets.”

Counties in the purple tier are also required by the state to begin a 10 p.m. to 5 a.m. curfew limiting many activities within 48 hours of being placed in the purple tier. Colfax said the goal of a curfew is to “decrease activity to slow the spread of the virus, particularly in late hours of the night, when more high-risk activity takes place.”

He warned that, “if our numbers continue to rise at the current rate, we could have hundreds of people in the hospital by late December early January. We are on track now to exceed the number of hospitalizations we had in the prior surges, unless we flatten the curve for a third time.”

San Francisco has seen far fewer deaths from COVID-19 per capita than other parts of the country, but he said that too could change. “We are seeing hospital systems around the country getting overwhelmed, so far we’ve avoided that here in San Francisco, which is why we’ve had such relative success in terms of morbidity and mortality, but it is entirely possible that unless we slow the spread of the virus we could be there.”

San Francisco and state officials are urging people to take the following measures:

Important San Francisco press conferences are carried on our radio station KSFP-LP, San Francisco at 102.5 FM at 7 p.m. on the day they take place.