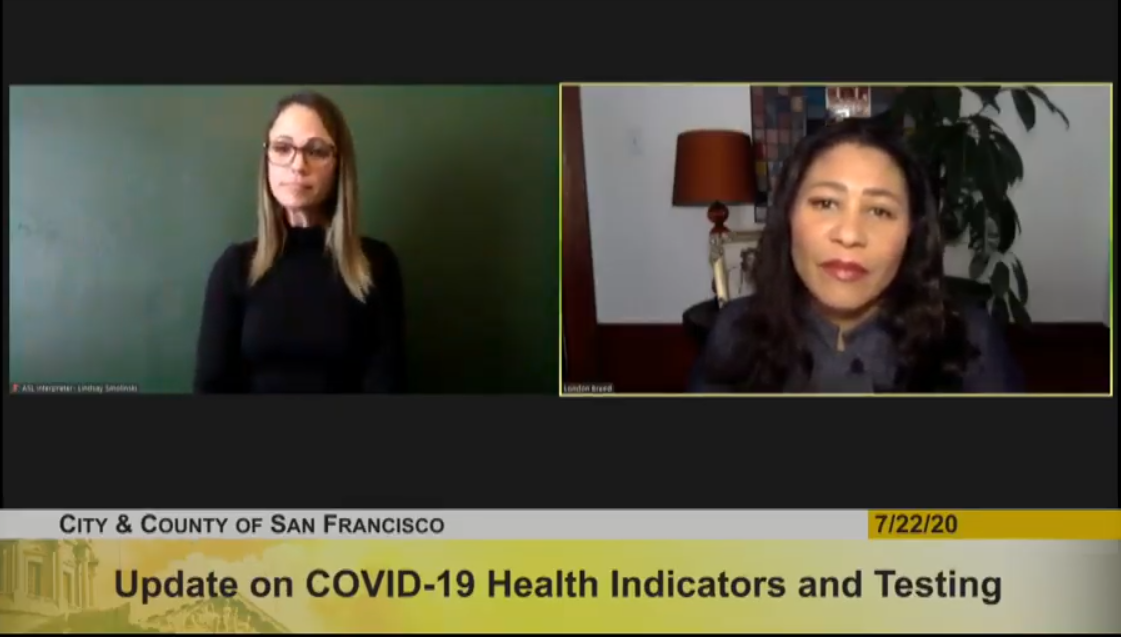 Mayor London Breed and a sign language interpreter at a July 22 press conference. Screen capture from SFGovTV via Zoom.

San Francisco is conducting more than 3,000 coronavirus tests per day on average, but backlogs are developing at labs and a rising demand is making it more difficult to schedule a test. Mayor London Breed announced Wednesday that testing capacity will be expanded by about 1,400 tests per day in the coming weeks through the addition of appointment times and testing facilities.

The CityTest facility on the Embarcadero will be adding 400 slots per day for essential workers. The city will launch two mobile pop-up testing sites with capacity of up to 250 tests per day, one of which will open this week and the other next week. Both pop-up facilities will rotate to neighborhoods where high rates of COVID-19 are detected. The city will also create a third CityTest site in a southeastern neighborhood in August, with a capacity of 500 tests per day at a yet undetermined location.

Breed cautioned that testing would not by itself slow the spread of the pandemic.

“We know that we can’t test our way out of this pandemic. We need people to be responsible, keep their distance from others, to avoid gatherings and to wash their hands” she said. “Getting tested is not a passport to do whatever you want, you can still get infected at any moment.”

Dr. Grant Colfax, director of the city’s Department of Public Health, said many of the people who have been tested at city sites have private health insurance. He said residents who are able to get tested through a private health care provider should try to do so, in order to preserve the city’s testing capacity for those without insurance who have no other option. The city has issued a health order requiring private providers to test patients with symptoms and those who have had close contact with an infected person. The order also strongly recommends that private providers test vulnerable residents and essential workers, Colfax said.

Turnaround time for a test can be as short as 72 hours, he said, but often takes longer.

“We’re seeing backups, especially with our provider labs and some of our own labs within the city. We are backing up seven days, 10 days at this point,” he said.

That is happening across the nation, he said.

“A severe lack of federal leadership has made testing a significant challenge across the country,” Colfax said. “It’s important to understand that the testing universe in San Francisco is much larger than the tests that individuals are seeking out for themselves.”

That includes testing residents and staff at the city’s skilled nursing facilities, and all people with symptoms in hospitals and clinics. The result, he said, is that San Francisco has the lowest rate of COVID-19 cases and deaths, and the highest rate of testing when compared to other major metropolitan areas like Los Angeles, Denver, Seattle, Boston and New York.

Nonetheless, since Monday, San Francisco has been on a state watch list of counties where the virus is spreading quickly. Colfax said he is concerned that San Francisco could see the kind of hospital-overwhelming spike in cases that previously struck New York City.

“I’m very concerned that as cases increase, it’s plausible we could get in a New York like situation iin the late summer, early fall,” he said. “The second part that we’ve learned from New York is that it is possible to flatten the curve with the facial coverings of social distancing,  the hygiene and staying at home that we continue to encourage. I just hope that we can do that before a massive surge.”

Other items discussed at the press conference: